What is Binding energy, actually?

I have read from my textbook about binding energy but it indicates two completely different ideas.I am listing them below:

"Binding Energy : An atomic nucleus is a stable structure.Inside it,the protons and neutrons are bond together by means of strong attractive nuclear forces.Thus a definite amount o work is required to be done to breakup the nucleus into its constituent particles and to place them at infinite distance from one another.This work gives a measure of the binding energy of the nucleus."

This definition gives the idea that binding energy is needed to overcome the Nuclear force between nucleons.

"It is seen that the mass of a stable nucleus is always less than the sum of the masses of the constituent protons and neutrons in their free state.This mass difference is called 'mass defect which accounts for the $\Delta E_b$' energy released when a certain number of neutrons and protons are brought together to form a nucleus of a certain charge and mass.

This gives the idea that binding energy is given to nucleus then this energy reflects as extra mass of protons and nucleus.

So what actually is binding energy.Another definition tells it is the Energy required to break up nucleus. This suggests Binding energy should account for both mass defect and Nuclear force potential energy.Then why the formula of binding energy only accounts for mass defect ?

And as far as I know from graph (below) Nuclear potential energy is not negligible. 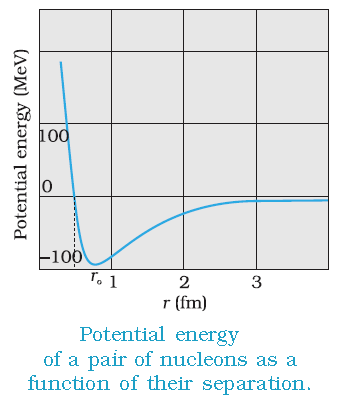 Edit From the given answers till now,what i get is idea that binding energy is required to break up nucleus into constituent particles.

So i applied conservation of energy to find this binding energy. Equation that i get is $$E_b+(m-Δm)*C²+NFP=m*C²$$ (NFP Is net nuclear force potential among all nucleons & m is mass of individual protons and neutrons when they are in free state and Δm is mass defect) rearranging we get

And as NFP is negative and very large in magnitude(ie:- NFP "-100MeV" was between two nucleons[data from graph] so for a smaller nucleus also NFP should be" $-100*(N choose 2)$) Please help in clarifying this Edit.

Please help me make out what actually binding energy is.

I think you know that two protons will repel each other, according to Coulomb's law. And the coulomb force of repulsion between two protons in a nucleus is approximately $250 N$ if they are separated by a distance of one fermi, which is very large considering the small mass of the proton.

So, as you might well know, Strong Nuclear force, for a short-range, manages to keep the nucleus together. Now, if you want to break the nucleus into its constituents, you need to do a certain amount of work- which is the binding energy.

Now, think about the nucleus before it was formed. All its constituents would have been separate entities. If you wished to make them into a single body, for the sake of spontaneity (my use of this word may not be entirely correct), the end product must possess lower energy than the sum of energies of independent entities.

This is rather counter-intuitive if you don't have an idea about Strong Nuclear forces, as there would be an increase in the energy of the system, by Coulomb's law.

But what actually happens is that the mass of the nucleus is less than the mass of its constituents taken one at a time. So, from Prof. Einstein's mass-energy equivalence relation, we can say that the energy contained in this mass was released during the formation of the Nucleus and this difference in mass is called the mass defect.

So, in order to break the Nucleus, you need to remove (or rather give back) what was holding them together-so, quite naturally, the binding energy is the same as the energy released from mass defect

As a response to your edited question, I'm including an analogy. Let us assume that you have a ball initially placed on the top of a shelf of height $h$. Now, if it slips and falls down, it will lose its internal energy in the form of kinetic energy and you will have the relation $$mgh+\frac{1}{2}mv^2=mgh_{2}$$ (essentially a special case of third equation of motion) where $h_2$ is its present height. If you want to lift it back to the position it initially was at, you need to supply energy equal to the energy lost as kinetic energy. $$E=\frac{1}{2}mv^2$$ You might have noticed that we don't consider $GFP$ (Gravitational Force Potential) in the equation for energy that has to be supplied.

Now to bring it back to the initial stage (The $E_i$ already includes the $NFP$ you're talking about, in the same way the $GFP$ is included in the analogy above ) Now, to take the nucleus back to its initial position, (with energy $E_i$) you need to supply it the binding energy. $$E_{nucleus}+E_b=E_i$$ rearranging, $$E_{nucleus}=E_i-E_b$$

Comparing this equation with that of formation of the nucleus, we have $$E_b=\Delta mc^2$$

The reason why this value only accounts for mass defect is because once you have provided energy equal to the mass defect, the system has enough energy to break into its individual components. If any less is provided, the total energy of the system isn’t enough to break it because the total energy is still less than the sum of the mass energy of the individual components.

The Binding energy of a nucleus is defined as the energy required to break up a nucleus into constituent Protons and Neutrons and to such a distance that they may not interact with each other.

Formula for Binding energy Now applying energy conservation we get

(We should not consider Nuclear Force potential as this same thing is accounted by mass defect(from above conclusion) .Hence considering NFP is like double counting) $$E_b=ΔmC².............(2)$$ This equation suggests us the defination 2 given that is binding energy is given to overcome the mass defect. From equation (1) & (2) We can say $$E_b=-NFP$$ Which implies $$E_b+NFP=0$$ As 0 is final Nuclear force potential (ie NFP_f) $$E_b=NFP_f-NFP=ΔNFP$$ $$E_b=ΔNFP..........(3)$$ This defination suggests us that Binding energy is given to overcome Nuclear force of attraction.In this case Binding energy is the measure of how strong is the nuclear force of attraction.

Both of defination are correct.They are just like opposite faces of a coin. (For better accuracy we can include EFP(Electrostatic force potential))

Not the answer you're looking for? Browse other questions tagged nuclear-physics mass-energy atoms neutrons binding-energy or ask your own question.