What will be the mass of the sun when the core is depleted of hydrogen about 5 billion years from now?

Our sun converts 600 million tons of H to He every second, that is 5 million tons of matter into energy through nuclear fission. However, as the core of the sun continues to shrink the outer layers of the sun move closer and experience a stronger gravitational force. This causes more pressure on the core, which is resulted by increases in the rate at which fusion occurs. Hence the rate at which our sun losses its mass is not continuous. I want to know the mass of our sun when the core is depleted of hydrogen about 5 billion years from now (Mass loss as a result of nuclear fusion only an not due to stellar wind). I also want to know its composition, at present 73% of our sun's mass is Hydrogen and 25% is He. 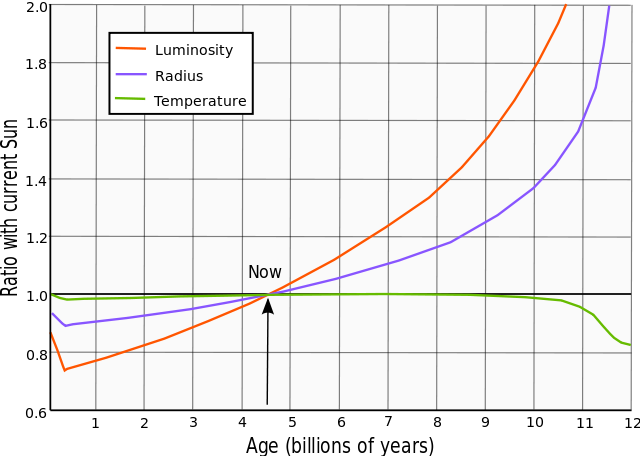 At the same time, the Sun is losing mass through the solar wind. The mass loss rate is variable, it depends to some exten ton the solar cycle, and probably scales with the magnetic field of the Sun (which in turn depends on rotation) in poorly understood ways.

The current solar mass loss rate probably averages out at something like $2\times 10^{-14} M_{\odot}$/year. If that were maintained, then the Sun would only lose a further $10^{-4}M_{\odot}$ over the next 5 billion years via this route, but in all likelihood the mass-loss rate will diminish with time during the main sequence, so mass loss via a wind is negligible on the (late) main sequence.

However, in post-main-sequence evolution, mass-loss via winds becomes dominant.

Not the answer you're looking for? Browse other questions tagged astrophysics estimation sun stars stellar-evolution or ask your own question.

3
Why will the increase in the sun's luminosity accelerate with respect to time?
10
What is the actual energy content of the Sun?
0
What unusual effects will we observe on the non-rotating Dyson sphere with Earth gravity around the Sun?
1
Another way to find the energy diffusion time in the Sun?
1
Trouble understanding exactly why core of sun does not mix with outer layers
2
How does the Sun generate its energy?