We're planning the science fair for my wife's high school later this year (if the quarantine allows us...). We are looking into doing this simple quantum eraser experimenter from Scientific American, but I was wondering if there was a way to put together a slightly delayed-choice version of the same.

I believe the simple quantum eraser experiment with polarizers from Scientific American, despite the explanations, tend to make kids deduce that the polarizer path labeler destroys the interference pattern "because you messed with the beam", and not because which-way information is encoded. In other words, takes some of the awe away.

Building a true delayed-choice quantum eraser (Kim et al., 1999) experiment would be overkill and beyond our amateur capabilities. So we devised an augmented experiment that would be somewhere in between: 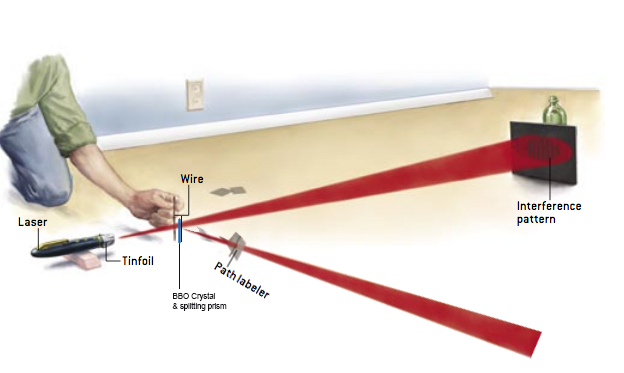 When the polarizing film pair is manually added into the idler beams we would expect it to destroy the signal photon interference on the screen. This would be unintuitive ("spooky") to the teens naked eyes as interacting on a second beam would destroy the interference pattern seen on the screen. Rather then delayed-choice, this is more of an action-at-a-distance situation as we're not going to be delaying the choice, just seeing that acting on one beam will change the behavior of another.

Now, I'm afraid my flaw here is that after adding a BBO crystal and/or the prism, noise is introduced that the interference pattern will be destroyed at the screen. Is my assumption correct? Is there any additional set up that could fix this?

Or... is there a way to split entangled beams in a way that the experiment will work for the naked eye? Actually, just being able to alter patterns, regardless of shape, on a screen at a distance would be enough to make this result in a mind-bending experience for the kids!

It's a bit late to matter, but there was never any possibility that your experiment could work as you hoped.

Everything that happens in Scientific American's "quantum" eraser experiment is correctly predicted by classical electromagnetism (Maxwell's equations), so it isn't really quantum, except inasmuch as everything is quantum.

Although you are looking at trillions of photons, each of them is interfering only with itself.

That's incorrect. Because of particle indistinguishability and the large particle count, there's no difference in this setup between a photon interfering with itself or with some other photon. The photons are best thought of as belonging to a single wave, not trillions of different waves. That wave is described almost perfectly by Maxwell's equations.

The article's analysis of the experiment seems to be predicated on the idea that you can consider each photon's behavior separately from the others, which isn't true.

If you add a beam splitter to this experiment, you don't get much which-path information. Because of particle indistinguishability, the most you can learn from measurements of one of the beams is what fraction of the trillions of photons in the other beam went one way and what fraction went the other way. With such a large particle count, you'll always find that the split is almost exactly 50-50. That isn't enough information to detectably alter the interference pattern.

To get a quantum eraser experiment you need to isolate the photons by reducing the laser's brightness to the point that it emits one photon at a time. I don't think that's possible with an ordinary consumer laser, and even if it is, you won't be able to see anything on the screen, because most of the photons that hit the screen won't scatter in precisely the right direction to enter the pupil of your eye, and the rare few that do will probably be filtered out as noise by the visual system before they reach the level of conscious perception. That makes it a bad experiment for a science fair.

Furthermore, even if you could somehow see photons striking the screen, you wouldn't see anything interesting. In a real quantum eraser experiment with a beam splitter, there is never an interference pattern on the screen. There are just correlations that can only be found by later data analysis. If you could see an effect on the screen of putting a polarizer in the path of the other beam, or doing anything at all with the other beam, then you could use that to send information faster than light. Entanglement-based communication devices are common in science fiction and inaccurate popular descriptions of quantum mechanics, but are impossible according to actual quantum field theory.

The quantum eraser is the strict application of a theory to a complex experimental setup .... it has led to controversy and I would say no definite conclusions. If other theories are applied the experimental behaviour can be explained and "erasing" is not required.

BBO crystals are used in 2 ways (your experiment uses it incorrectly), 1) depending on the incoming beam polarization the beam will take one path or another ... i.e. a beam can be split it 2 paths especially if you have a laser (all photons polarized in one direction) and as you rotate it you will see one path then the other .... at an ambiguous angle 2 beams are produced 2) if you excite with a higher energy beam (UV? - dangerous) the crystal will produce entangled IR (invisible to the eye) photons, again at slight different angles.

The entangled photons are way beyond your budget and you need special equipment to observe .... a lot of work for an experiment that is likely not showing any erasing at all.

A good experiment may be to simply split your beam with a 50/50 mirror ... set up an interference in one path (path 1) that is adjustable .... the intensity of the second path will vary as the "interference" path length is varied in path 1.

There are tons of YouTube videos about the "delayed choice quantum eraser experiment" all done with animation, but I can't find any, repeating "any" video with the actual hardware :-(

It is not looking to me that someone committed experiment fraud, and the rest of the world got so excited and did not verify his or her work.

Not the answer you're looking for? Browse other questions tagged quantum-mechanics quantum-entanglement home-experiment quantum-eraser or ask your own question.

6
What is required for a minimum viable Bell test experiment at home?