How does a string store information during wave superposition?

Given we have two Guassian wave pulses in the same medium (string) but in opposite directions. The principle of superposition states that they should pass through each other without being disturbed, and that the net displacement is the vector sum of the individual displacements.

My question is, how does the string have 'memory' of the information on the shape and velocity of both pulses separately? For instance, consider if the interference were destructive. Then when the string is perfectly flat, it cannot have memory of what brought it to this state; similar to how a particle does not continue to accelerate after a force has stopped acting: it has no memory. I understand that although the displacement is zero, the velocity is non zero and at this point the string has kinetic energy. How can the string know from the velocities of various points which waves will emerge?

How do both the waves emerge unchanged?

I think my confusion stems from a lack of conceptual clarity on the principle of superposition, I may not completely understand it. Any help is appreciated.

Note to moderators: I request that this question not be treated as a duplicate. While there are similar questions here and here, none of the answers are able to justify how this happens in terms that make sense to me.

Let's look at it this way:

As an observer, move along one wave on an infinite string, so that it appears motionless to you. It is just a bump on the line.

Consider the other, moving wave. You can see it move towards the bump, move above it, and move past it. That moving wave has always kept its shape, even when it was travelling over the bump. So, there is nothing special happening when the two waves encounters - each one sees the other one as a bump on its way; that's superposition. No need here for any more 'memory' than when there is no bump (no other wave).

In other words, the need for a 'memory' of sort only arises because when you see the two waves superposing, you do not recognize their previous shapes, you do not 'see' in the overall shape the separated waves that you previously identified. But the way we make sense of what we perceive can be tricky - and in that case, if it may seem to you that some 'memory' is needed, then even a single travelling wave that you always can 'see' would still need this 'memory' to keep its shape. Again, nothing special here with regard to superposition.

As for your conceptual clarity on superposition- imho, you already have it. Its the question which is counter intuitive.

Its an intriguing question as to how waves can emerge from nothing. For e.g. the pass through of two exactly opposite waves. From a matehematical POV, its clear-the superposition principle. Since the evolution of any individual wave isn't affected by the presence of another, they in fact should not stay put post superposition.

Its so much easier when one sees the motion of just one harmonic mode of a string. There this energy is evident in the form of impending motion-even when the string is flat one doesn't expect it to stay so.

Wave superposition happens because each point in a string of superimposed state, gets a pair of velocities, from a first and second impulse : 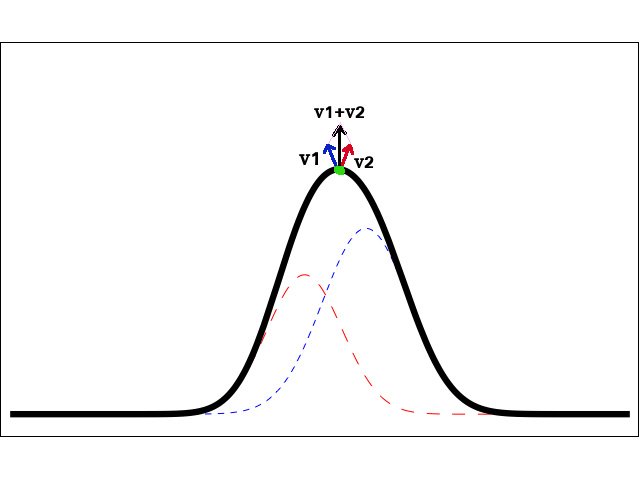 Not the answer you're looking for? Browse other questions tagged newtonian-mechanics waves string superposition or ask your own question.

82
Why do travelling waves continue after amplitude sum = 0?
2
Superimposed state vs. zero amplitude state
2
How is the information stored when a superposition of two incidental waves occupy the same space?

7
How do traveling waves pass through a standing wave node, if the node doesn't move?
1
Questions related to resonance/standing-waves and sound
2
Superimposed state vs. zero amplitude state
0
What happens to the velocity distribution during constructive interference?
5
When does the principle of superposition apply?
2
How is the information stored when a superposition of two incidental waves occupy the same space?
1
Are there different types of superposition?
3
String conservation with springs