Can we make images of single atoms?

I was wondering how far in imaging physics had gotten. Do we hold the technology to actually take a picture of, say, an alpha particle, or even a single atom?

I realise we aren't talking about camera pictures, so what kind of imaging techniques have taken images/is most likely to be the technique to take an image of a single atom?

We can, and have, taken "pictures" of individual atoms in materials.

One example is this image taken at IBM : 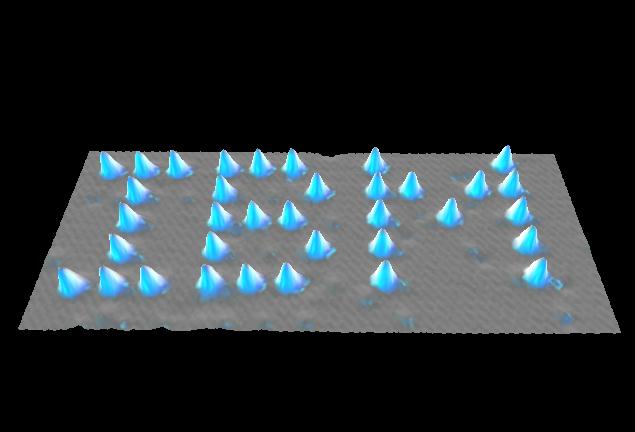 Each dot is a single atom that was placed on the substrate. You can find similar images taken by IBM here.

This image was made using a technique called "Scanning Tunneling Microscopy" (STM) which relies on quantum tunneling. It isn't an optical technique, like the microscopes we use in school. But it uses a probe (which is just a sharp tip) which is at some voltage with respect to the sample being imaged, and because of the voltage difference between the probe and the sample, electrons tunnel through the space in between and a "tunneling current" is observed. This tunneling current can be a function of several different things, like the applied voltage difference, and the height of the sample from the tip etc.

The resolution of this technique is ~ $0.1 \text{ nm}$, and can resolve individual atoms.

This technique is also capable of resolving individual atoms, but I think not quite as well as STM, but I could be wrong about that.

Yes. Trapped ions have been held in place long enough and cooled enough to be literally photographed with a sensitive CCD camera.

One example is here 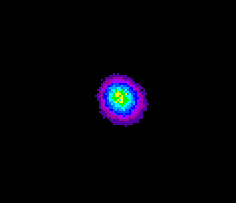 Trapped atoms have been photographed too: http://www.flickr.com/photos/fatllama/43155091/

While a Laser excites an electron to a higher energy level, the spontaneous emission can be captured with the CCD camera to "photograph".

There is a presentation of IBM's nantotech research

Not the answer you're looking for? Browse other questions tagged imaging microscopy or ask your own question.

-3
Have we ever seen an atom? If not, how do we know they exists?
2
Is it possible to view an atom?
1
Is it not impossible to see a single atom using visible light?

5
Optical explanation of images of stars?
5
How to produce a loss-free combination of two "identical" beams?
0
Thick mirror produces number of images
4
What are these wavish patterns around atoms on microscopic images?
0
Encoding multiple images in 1 beam
2
How can I focus an optical device at infinity, inside a room with limited space?
1
How to determine the particles size measurement error in SEM images