About propagation of force through a string 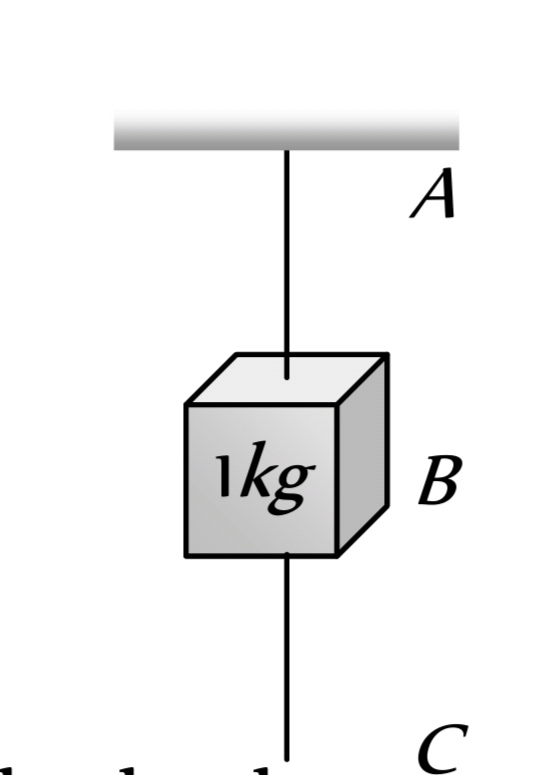 Here is what I was thinking:

Case (1):If a small force not enough to break the string is applied, all parts of the system receive this force at some instant because of the tension and Newton's third law. But eventually the force is felt at $A$.

This goes as a chain reaction and eventually the force is propagated to the top at point $A$.

Since the part $AB$ has to support the block,it also experiences a force of $9.8N$.

So if a force is applied to the string and gradually increased, a part in $AB$ is more likely to break.

=> Is everything in the above case(1) that I have said, correct?

Case(2): Now a very large impulsive force is applied to the system which is enough to break the string.

$BC$ will definitely break. But the question is, will $AB$ also break?

I think that a force just infinitesimally smaller than the force required to break the string would propagate onto the string $AB$ just before $BC$ breaks.

However since the string $AB$ also experiences the weight of the block, which is non zero, the string must break as well.

Edit: what is the condition for both AB and BC to break?

Your logic is right, except when you say

... a force applied on a small part of the string causes an instantaneous acceleration on the small part which puts a force on the adjacent part above it.

An ideal string will not extend and there will not be any acceleration, it will rather just propagate the tension across it.

In the limit that one pulls the string with a force whose temporal profile can be represented as a Dirac's delta (i.e. infinite force for an infinitesimal amount of time), only the bottom string will break, as there will not be any transferred impulse to the brick B, which, therefore, stands still.

In real life it is not so easy to predict where the wire will snap, one has to consider the propagation of stresses inside the structure and the presence of defects ...

to propagate the sudden force you apply at C the block has to move, its inertia is greater, than the breaking point of the lower part of the string. all strings have a weakest point, so the string may break at any point between C and B

31
Understanding which string breaks when one pulls on a hanging block from below
0
What are the partial differential equations for Solid Stress Analysis?

2
Why does, at one time, tension balances the weight but at the other time don't balance it?
1
Tension in a string
0
What is the direction of Tension Force in a rope pulled at its two ends with equal forces?
1
What drives the free end of a slackened string?
0
Tension of a massless string
0
Vertical force acting on a body attached to an end of a rod/string when the rod/string is at an angle with the vertical plane
2
A block connected to a string is kept on a rough surface. If an external force is applied, which force would counteract first- tension or friction?