Why is this sum the delta function?

I am reading the first chapter from Fetter and Walecka, which is on second quantization, and I have understood everything up to this section. It seems to me that these field operators essentially define classes of operators indexed by $\mathbf{x}$, so I plug in a spatial coordinate and I get a linear combination of creation/annhilation operators with coefficients in $\mathbb{C}$.

What I don't understand is the second inequality in 2.3a. How does this follow from completeness? I've been trying to figure this out for like half a day. 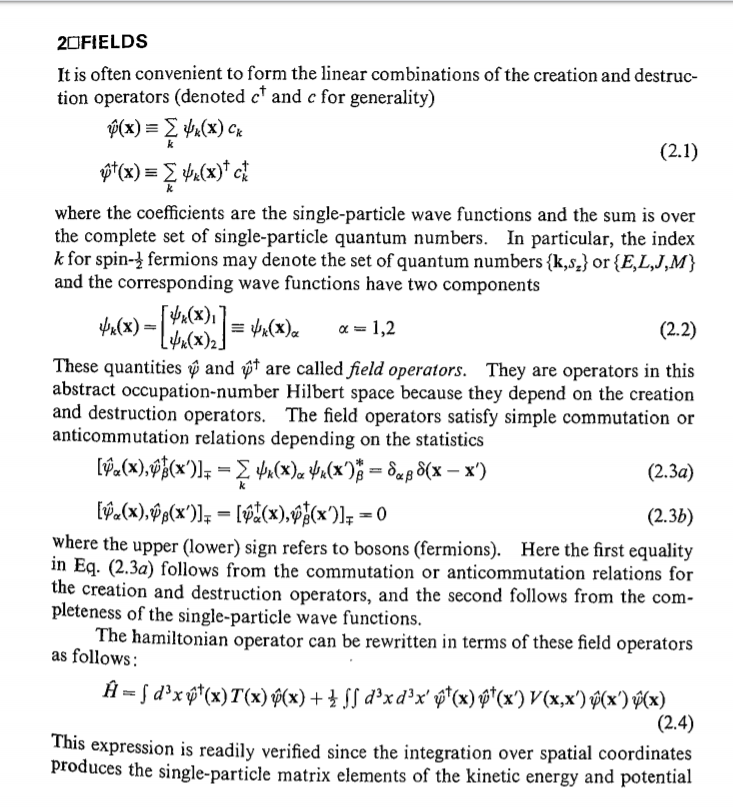 This is still a property of first quantization. In Dirac notation it becomes quite clear (I find). Define $\psi_k(x)=\langle x|k\rangle$ and $\psi_k(x)^*=\langle k|x\rangle$, dropping spin for now. Here $\psi$ is just a regular function and $|k\rangle$ is the eigenstate with quantum number $k$. For example $\psi_k(x)$ could be the k'th energy state of the harmonic oscillator. Summing these functions over $k$ gives you \begin{align}\sum_k\psi_k(x)\psi_k(x')^*&=\sum_k\langle x|k\rangle\langle k|x'\rangle\\ &=\langle x|\underbrace{\left(\sum_k|k\rangle\langle k|\right)}_1|x'\rangle\\ &=\langle x|x'\rangle\\ &=\delta(x-x') \end{align} Extending to spin starts to get messy but follows the same steps. Define $\psi_k(x)_\alpha=\langle x,\alpha|k\rangle$ where $|x,\alpha\rangle=|x\rangle\otimes|\alpha\rangle$ and $\langle x,\alpha|x',\beta\rangle=\delta_{\alpha,\beta}\delta(x-x')$. Plugging this in gives the desired expression. Why did $\alpha$ and $x$ end up on the bra while $k$ ends up on the ket? Remember that $k$ decribes which state you are looking at while $x$ and $\alpha$ describe which component of that state you are considering.

This is the defining condition for field operators. To show that it is required for a physical theory, we define the interaction density, $I(x)$, whose integral over space is the interaction Hamiltonian. We integrate the Schrodinger equation iteratively and can arrive at the perturbation expansion, or Dyson expansion, which can be written $$U(t) \approx 1+ \sum_{n=1}^\infty \frac{(-1)^n}{n!}\int{d^4x} \cdots \int{d^4x} \mathscr{T} \{I(x_1) \cdots I(x_n) \} $$

Under Lorentz transformation, the order of interactions can be changed in the time-ordered product $\mathscr{T} $ whenever $x_i - x_j$ is space-like. Conversely, Lorentz transformation cannot change the calculation of probabilities under the condition that the initial and final kets are stable states of free particles, as in scattering experiments. The locality condition, or microcausality, follows immediately as a requirement on interaction operators. It states that for any $x,y$ such that $x-y$ is space-like, the commutator of the interaction densities at $x$ and $y$ vanishes, $$[I(y), I(x)] =0 $$ We fulfil this condition by constructing the interaction densities from products of field operators, which obey the same condition for bosons, and the corresponding anti-commutation relation for fermions, which necessarily appear in pairs in the interaction density.

Because we require covariance, vanishing for equal times except at $x=y$ is equivalent to vanishing for spacelike separation. Physically the vanishing of (anti-)commutators for spacelike separations means that effects cannot propagate faster than the speed of light. It can be interpreted as meaning that particles must meet at a point in order to interact, although the point at which they meet has no precise definition, just as the position of a particle has no precise meaning in the general case in quantum mechanics.

Not the answer you're looking for? Browse other questions tagged quantum-mechanics quantum-field-theory operators commutator second-quantization or ask your own question.

0
Sum and Different and angular momentum operators
21
The Origins of the Second Quantization
1
Why this sum of creation and annihilation operator?
0
Kinetic energy Hamiltonian in second quantized form and the delta function
2
Wigner vs. BRST approach to Klein-Gordon
4
Does $T(x)$ represent a $c$ number or an operator in the second quantization?
1
How do I correctly evaluate this simple expression with delta-commutator operators?