Why is the displacement negative when half oscillation is done in simple harmonic motion?

Now, if we increase t by $\frac{2\pi}{\omega}$, then the displacement becomes

So, $2\pi/\omega$ is the time period. I understand this conclusion completely. I have no problem with this scenario. I only stated scenario 1 to explain the premises on which scenario 2 is based.

Now if we increase t by $\pi/\omega$ or half of the time period, we get

Now, I don't understand this conclusion. I think that the displacement $x'$ should've been equal to $x$, not $-x$.

You can visualize this in your head. Suppose we have a particle at the displacement $x=0.5m$. Let the time period is T. Now after complete oscillation or after time T, no doubt the particle would return to position $x = 0.5m$. But this is true for a half oscillation as well. If the amplitude is A, then we can visualize the particle moving from $x=0.5m$ to $x=+A$ by going right and then back to $x=0.5m$ by going left. There you go! That's a half oscillation. And after half oscillation, what do we see? We see that $x'=x$, contrary to the above mathematical conclusion where $x'=-x$. So is the above mathematical conclusion wrong?

Your reasoning is not quite correct, where the particle will find itself after half a period depends on its initial position.

The visualization in your head is wrong, assuming your 0.5m 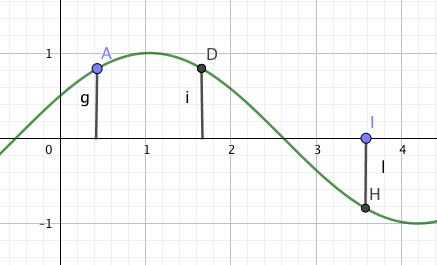 Not the answer you're looking for? Browse other questions tagged oscillators or ask your own question.

4
Probability of position in linear shm?
6
Is the usually taught solution to forced harmonic motion just a special solution?
0
Simple harmonic motion : why is the period independent of amplitude even when angular velocity is related to the amplitude?
1
Does fluid motion follow some periodic function?
1
Better understanding natural resonance frequency and simple harmonic motion
2
Energy Transfer Between Coupled Oscillators
0
Time Period of a periodic function
0
Trying to prove the wave equation from circle