What would the collision of two photons look like?

Could someone explain to me what the collision of two photons would look like? Will they behave like,

I assume that energy of that system is too small to make creation of pairs possible.

*Edit. The photons can interact through higher-order processes. As pointed out in the comments (and I hope I'm getting this right), there is a (quite small) probability amplitude for two photons to get absorbed in, and two photons be emitted by, e.g. an fermion-antifermion virtual pair (which is the leading contributor to the combined amplitude of all such processes). Whether (and this is my cop-out) the emitted photons can be considered the same photons as the absorbed photons, I leave to the, certainly more knowledgeable, commentators.

A lowest order QED Feynman diagram for the process photon + photon $\rightarrow$ electron + positron looks like shown below (the time axis is the horizontal axis).

From the point of view of energy conservation, this process is only possible if sum of the energy of the photons is above twice the electron mass. In the center of mass frame of the di-photon system, the photons need to have at least 511 keV. 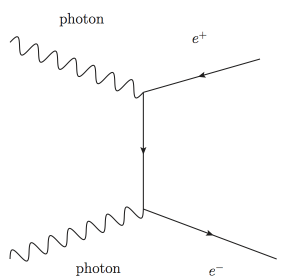 By time symmetry, two photons with sufficient mutual energy necessarily are capable of annihilating each other to produce an electron-positron pair, since one of the decay modes for positron-electron annihilation is the production of two gamma photons. It's just harder to arrange experimentally, since unlike the electron and positron the uncharged photons have no attraction for each other.

Not the answer you're looking for? Browse other questions tagged photons quantum-electrodynamics feynman-diagrams or ask your own question.

6
What happens when two photons collide with one another, head on, dead center?
1
What happens when two photons collide?
0
Why don't photons crash into each other occasionally? Or do they?
1
can light bounce off another light?
52
Scattering of light by light: experimental status
-1
How much $G$ is required to bend light?
4
Focused beam of light
4
What determines the probability of a pair of photons interacting, and producing a positron and an electron?
1
Photons interact with themselves

28
The exchange of photons gives rise to the electromagnetic force
2
Does the wave nature of a particle refer to the wave function?
1
Explanation of the linear polarization from the photon spin
1
Is there a harmonic potential explaining why photons have energies $E=n\hbar\omega$?
3
Lasers so powerful they could rip apart empty space
6
At any given point in the universe, are there a huge number of photons crossing paths?
5
How to interpret a wavepacket in quantum field theory: is it one particle or a superposition of many?
8
Relation between radio waves and photons generated by a classical current
0
Existence of Photon