A recent paper, titled Inertia from an Asymmetric Casimir Effect, discusses the universal horizons relative to an accelerating observer (Rindler space). A figure it used to demonstrate its point challenged a view I held. 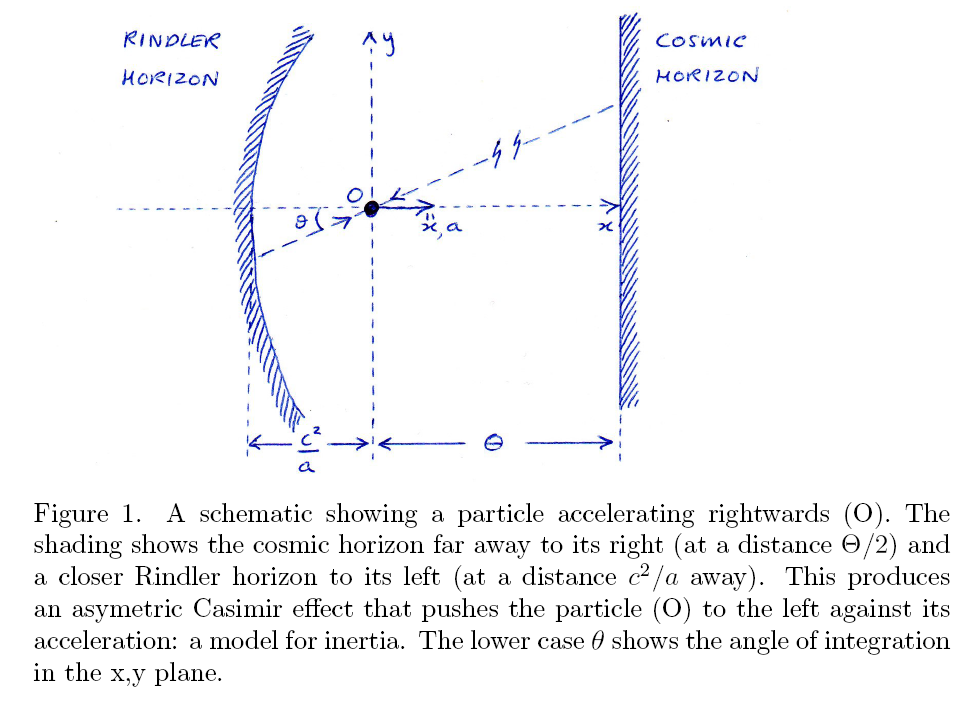 I previously asked a question about Rindler space, Do apparent event horizons have Hawking radiation?. My take-away from the (very good) answers was that an the Rindler Horizon (in the above figure) emits Hawking radiation in the same way that a black hole or the cosmic horizon does. This is called Unruh radiation.

This leads me to the obvious question: Does the accelerating observer see the new Unruh radiation and the old cosmic horizon's radiation?

As you accelerate to the right, then you replace the cosmic horizon to you left with a new horizon, closer to you. Radiation thus appears out of nowhere, but does that mean that the existing radiation from the prior horizon disappears?

In my first version of this question I referenced both the CMB and cosmic horizon radiation. These are two different things, but I treated them as the same thing. The question was answered for the CMB - it remains just as the light from any galaxy would.

I've reformulated this so it can be about the Rindler Horizon's radiation versus radiation from the original cosmic horizon. To illustrate this, I made my own version of Figure 1 above, with more detail for the old versus new horizon. Here: 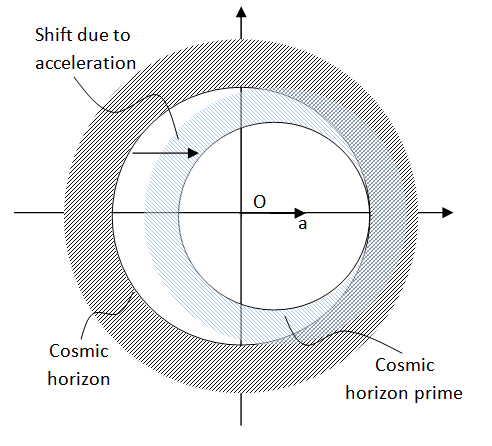 This corresponds to Figure 1, since his surface labeled "COSMIC HORIZON" is the rightmost part of the horizon that remains the same for the accelerating observer as well as the inertial observer. His "RINDLER HORIZON" on the left is only the new horizon, leaving out the old horizon, which I have included.

If we say that $O$ just started accelerating, then what do we expect? Logical possibilities include:

I'm also not sure if I've drawn the new horizon correctly. I would think that you couldn't "reveal" any galaxy beyond the cosmic horizon at the rightmost point, but to $O$, its dark-energy acceleration is less than to the inertial observer. Maybe I should have just moved the horizon to the right instead of shrinking it? I'm not sure, but I think the paper assumed no change in the cosmic horizon Hawking radiation from the right.

Thank you for your interesting question. The following is what I assumed in the paper. If you accelerate to the right, the Rindler horizon to your left is a boundary beyond which things are in principle unobservable for you. So, as soon as the nearer Rindler horizon forms, the far cosmic horizon behind it becomes unobservable and therefore (following the attitude of Mach) irrelevant. I assumed that the distance to the cosmic horizon on the right remains the same. I hope this answers your questions. It probably raises a lot of new ones!

I think you are confusing the CMB with radiation from the apparent horizon. CMB is just relic light from the surface of last-scattering - it behaves like any light which is emitted from a source. It is totally unrelated to the Hawking radiation emitted from the horizon. A neat coincidence (as afar as we know) is that the surface of last scattering is "close" to the horizon. This just means that the age of the universe is well-approximated by the Hubble time $\sim H^{-1}$.

So in the distant future, the CMB light will redshift to absolute zero, and the dominant source of radiation will indeed be Hawking radiation from the apparent horizon.

I know this doesn't fully answer your question, but I hope it helps.

I'm happy to see that Mike himself has replied to the question (being him the author of the paper in question, and the inertia-as-a-cosmological-casimir-cutoff effect idea), but i wanted to underline a few items.

A derivation of a MOND-like acceleration cutoff for inertia as proposed by quantised inertia using heuristic by physically sound arguments, which is undoubtedly on the same order of magnitude that the one that you need for explaining galactic rotation curves, is something that requires anyone studying dark matter to stop and think about this. Is this really an explanation that can explain all that has been observed?

This is a deep mystery

Not the answer you're looking for? Browse other questions tagged inertia cosmic-microwave-background casimir-effect unruh-effect or ask your own question.