Why is Pascal's law true?

Pascal's principle state that if an external pressure is applied to a confined fluid, the pressure at every point within the fluid increases by that amount.

Is there a mathematical derivation or conceptual explanation as to why this is the case, or has it just been experimentally observed and accepted?

We know that pascal's law is true from observation.

However, from a classical perspective it's easy to illustrate why Pascal's principle is true using:

We can make use of a simple example. Consider a simple prism of fluid (We'll use a prism because it has sides of unequal area): 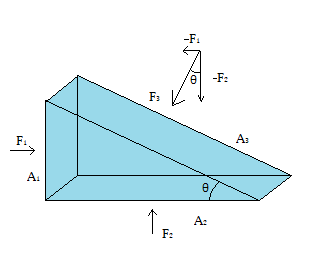 Because the fluid is in equilibrium, we can use Newton's 2nd law and the definition of pressure to say

Which is one way to state Pascal's principle.

This is a simple classical example, and not a proof. For a real 'proof' using more fundamental principles, Pascal's principle is technically a specific case of the Navier-Stokes equation from fluid mechanics.

Experimental observation and therefore acception. In physics , unlike math we start with the results of an experiment and then we try to write down those results in math language(equations and mathematical symbols). This is the experiment Pascal made :

Pascal's barrel is the name of a hydrostatics experiment allegedly performed by Blaise Pascal in 1646. In the experiment, Pascal supposedly inserted a long vertical tube into a barrel filled with water. When water was poured into the vertical tube, the increase in hydrostatic pressure caused the barrel to burst

Laws are axioms. Axioms are propositions accepted true for the sake of knowing what will be the results. Many people define axioms as self evident truths, but that's 'daily life use defination'. In sciences we use the former defination although many textbooks use later one so do many people.

So Pascal's law or for that matter Newton's law are the propositions accepted true to see what will be the result.

If these results matches with many experimental observations and is able to explain many natural phenomenons rationally, then these laws are thaught in schools. But school teachers teach these laws as unlimate truth. But this is incorrect. Laws are not truth, they are just accepted propositions.

Einstein in his book,The evolution of physics, wrote:

In the whole history of science from Greek philosophy to modern physics there have been constant attempts to reduce the apparent complexity of natural phenomena to some simple fundamental ideas and relations. This is the underlying principle of all natural philosophy. It is expressed even in the work of the Atomists. Twenty-three centuries ago Democritus wrote:

What Einstein meant is that the main goal of all sciences, even including philosophy, is to explain every phenomenon from 'some simple fundamental ideas and relations'(axioms).

The book I mentioned; I think wil be helpful to you: you may be having questions like How do we find these axioms? Are these laws arbitrary?(yes) and many more.

1
How is external pressure transmitted when a fluid is not enclosed?
7
Why should fluids be confined for Pascal's Law to be applicable
0
What is the physical fundamentals of Pascal's law
1
Question Regarding torricelli's theorem/Law
1
Why does a glass bottle completely filled with water not break when hit on a nail?
2
What is the explanation of Pascal's law at molecular level?
1
Why does Pascal's principle apply to a Hydraulic jack but not to stream lines in a stream tube?
9
Why Pascal's Law is true and what is the mechanism for force amplification at molecular level?
1
About the pressure of a confined gas