Why does the proper time between two events depend on the worldline between them?

On Wikipedia, it is stated that:

Proper time along a timelike world line is defined as the time as measured by a clock following that line.

The proper time interval between two events depends not only on the events but also the world line connecting them, and hence on the motion of the clock between the events.

Unfortunately, both of these statements make sense to me, but how they can both be correct does not. If the proper time interval between two events is the time as measured by a clock following that line, then surely that measurement is independent of path? If I watch someone travel (through space) slowly, but directly between two events and measure a proper time $\tau_1$, and someone else travels quickly, but indirectly and measures a proper time $\tau_2$, how can these measurements be different?

From both of their perspectives, the events happened at the same point, separated by a time interval $\tau$, neither of them is aware they have moved at all, but as an outside observer I have seen that their wordlines have different lengths.

If the proper time interval between two events is the time as measured by a clock following that line, then surely that measurement is independent of path?

I think the problem is that you are not understanding the intended use of the words. The path here is the path in 4-D spacetime, and is exactly the same thing as the world line. The difference in world line describes the difference in motion.

From both of their perspectives, the events happened at the same point, separated by a time interval $\tau$, neither of them is aware they have moved at all

but one of them measured $\tau_1$ and the other measured $\tau_2$, so they both described the event where they met with different time coordinate, reflecting the fact that they followed different world lines.

The point is that proper time as measured by a clock only strictly applies at the location of the clock. Outside of that immediate neighbourhood we have only conventional definitions of synchroneity. This is a diagram I use in special relativity showing time coordinates for the twin paradox using Einstein synchroneity. 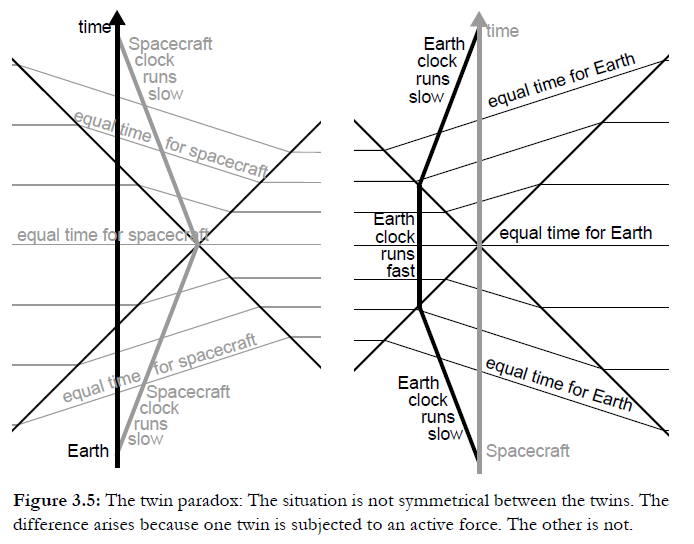 2) More properly, it is the time interval measured by a single clock at the (common) location of the events, as opposed to two different clocks at different locations $x_1,x_2$.

3) It can be conveniently rephrased by saying that there is an observer traversing between the two events, and he therefore measures the time between the events on the same clock-the one he carries with himself. This is a little slippery, because in SR, observers are entire coordinate systems and not somebody sitting at the origin, but by 'traversing' we mean that the clock at the origin has coincided with the events at different times.

4) Now, this 'traversal' is characterised by the trajectory of the observer, which has some arclength -$ds^2$, and this is by definition an invariant quantity. The proper time, therefore is independent of the observer traversing, and is an invariant too.

5) It is important to realise that it is not always possible to find a frame where the two events are at the same $x$-these are 'timelike seperate events'. If $E(x_2,t_2)$ lies outside the light cone at $E(x_2,t_2)$, then no observer can 'traverse' between the events-not even light can! This is essentially saying that only those events are accessible to an observer at some $E$, which lie in the light cone at $E$. I would have included a diagram, but the answer by @CharlesFrancis already has a good illustration of the idea.

4
Equivalence of two definitions of proper time in special relativity