What do the fixed points of a RG equation mean and what are its importance?

Can somebody explain to me what the fixed points of a renormalization group mean? What is their physical significance in the sense that why do we study them and what do we get to know from them?

The RG describes how a QFT changes under an overall change of scale -- loosely speaking, as we "zoom in" or "zoom out". Fixed points of the RG are scale-invariant QFTs: they look the same at all scales. If you start with some generic QFT and follow the RG flow to its low- or high-resolution limit, the usual expectation is that it approaches a scale-invariant QFT (if the limit is defined at all).

Many different QFTs may flow to the same fixed point, so we can think of the scale-invariant QFTs as unifying landmarks in the landscape of all QFTs. This is what universality is about. (This is also closely related to why renormalizable QFTs are often sufficient in applications. Roughly speaking, at low enough resolution, any QFT looks the same as a renormalizable one, even if we don't go all the way to the fixed point.) Knowing what scale-invariant QFTs lie at the low- and high-resolution endpoints of a given RG flow can tell us a lot about the QFTs that lie along intermediate points on that flow. Conversely, one way to approach the study of QFT is to start with a scale-invariant QFT and perturb it in different ways, which is like taking little steps out into the various RG flows that go to/from that particular fixed point in various directions.

The study of critical phenomena in statistical mechanics, like the critical point that terminates the liquid-vapor phase transition of a typical fluid, uses the same ideas. (This was probably the inspiration for some of the key ideas.)

Interestingly, scale-invariant QFTs tend to be invariant under a larger set of transformations, the conformal transformations. This sometimes allows additional non-perturbative results to be derived, especially in 2-d spacetime.

Consider two distinct physical systems (for example Ni or Fe magnet) that flow to the same fixed point under RG, then near the critical point, they have similar behaviors in heat capacity or magnetic susceptibility measurements. More precisely, the critical exponents, which characterize how these quantities diverge, are the same. That is to say they correspond to the same universality class, since they flow to the same fixed point.

But you can say the fixed points don't exactly describe the physical systems we are studying so why bother? Because studying Fe/Ni exactly is too complicated. We are content enough to correctly get the exponents that describe a non-generic measurement.

where $t$ is the reduced temperature and $u$ the interaction term. The RG flow diagram is given by Kardar chapter 5 which I copy below, 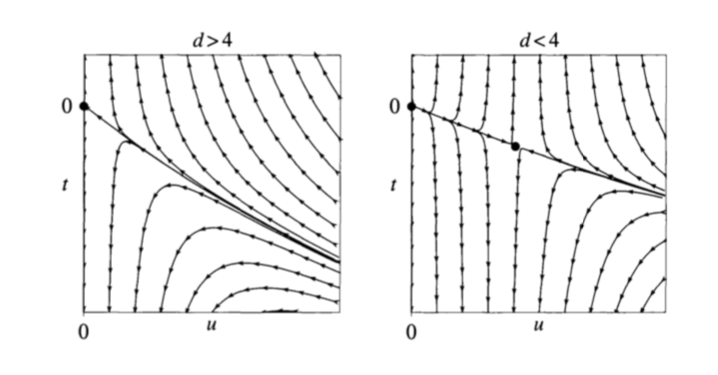 for $d<4$, the non-zero fixed point is called Wilson-Fisher fixed point, which describe the paramagnet/ferromagnet phase transition. You can see there are two relatively straight lines flow into the same WF fixed point. Real materials like Ni/Fe will have some curve in this t-u parameter plane that people measure and at some point both will cross the straight line and flow into WF fixed point.

25
The divergence in QCD Series— How many are they, and what do they mean?
6
The relation between critical surface and the (renormalization) fixed point
11
The “dangerous” fixed points for Renormalization Group
1
How do fixed points of the RGEs get perturbed in QFTs?
12
Are there any known models with limit cycles in their RG flow?
2
Behavior in renormalization group flow that reaches critical point
3
RG fixed points and $T_{\mu\nu}$