Let $f_i(x)$ be a parton distribution function as known from QCD factorisation theorems. Is $f_i(x)$ non-negative for $0<x<1$? If so, how can this be seen from the definition of PDFs in terms of operator products?

Also take a look into this research : 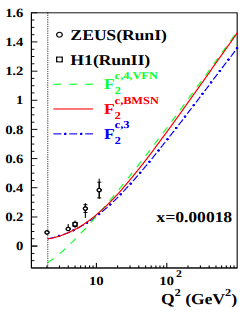 where authors claim that :

The VFN scheme is valid only at asymptotically large values of Q and cannot be routinely extrapolated to the low-Q region.

So it can't take negatives values for sure.

OK, as the question eventually morphed, the answer is

They are an assumed input (not an output) of parton estimates, fitted to data.

Typically, as, e.g., in Schwartz 32.1.4, they count gluons and constituent and sea quarks. You know there is a constituent d in the proton. If there were no sea, you'd have $$ \int dx ~~f_d(x) =1, $$ and the function would be a bona-fide probability distribution: it would map what fraction of the proton's momentum that quark is likely to carry.

[By contrast, GPDs in phase space are not, and violate probability axioms with aplomb, but since you did not ask, let's leave them out for now...]

In light cone gauge parton distribution functions are matrix elements of number operators inside a hadron, so they appear to be manifestly positive, as expected from the naive parton model. There is a subtlety, because these matrix elements are divergent, and require counter terms. As a result, I do not think that there is a formal proof of positivity.

Not the answer you're looking for? Browse other questions tagged parton or ask your own question.

4
Do electrons interact with gluons?
0
Parton distribution function - dependence on $Q$?
2
Applicability of parton model at low factorization scale
3
How to derive operator form of the parton distribution function
5
How are DGLAP splitting kernels probabilites for parton branchings?
0
Is $\mu$ the renormalization or factorization scale in the DGLAP equations?
0
OPE leading twist = collinear factorisation?