Why is the answer different with energy conservation vs forces? 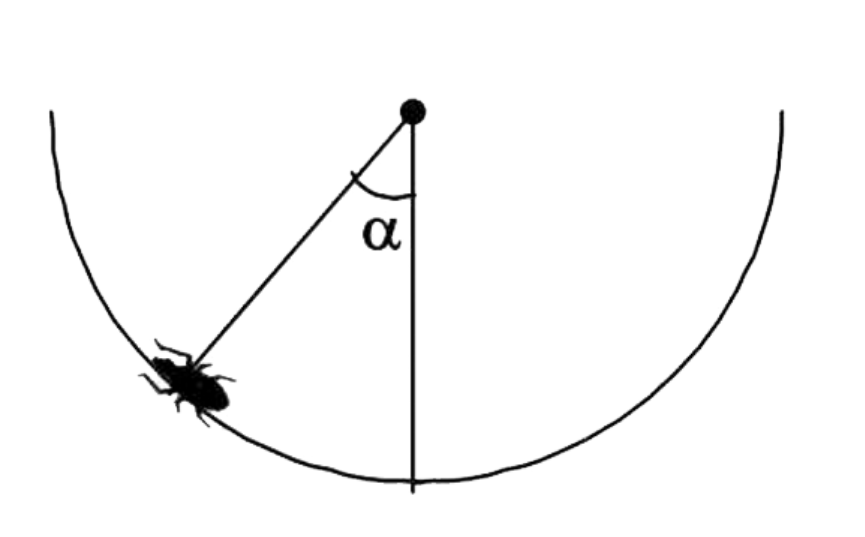 With the force method, the solution can be found as at the highest point the frictional force would be equal to gravitational force.Therefore, $$\mu mg\cos\alpha=mg \sin\alpha$$ $$\implies \cot \alpha=1/\mu$$

First, I am assuming that there is no kinetic friction acting on the insect as it moves up the bowl. If kinetic friction were involved, you would have energy dissipation, but I will not consider that here.

Also, technically the static friction force can't do work because the point of contact between the ant and the bowl doesn't move as the force is being applied, but that point isn't important here, as the (correct) integral will still give the work done by the insect's legs on the rest of the insect, even if the physical interpretation isn't correct.

The difference in energy between the two static equilibrium positions may only be some potential energy difference. You may assume the friction force is $F=\mu N$ during sliding, where $\mu$ is the kinetic friction coefficient (taken equal to the static friction coefficient) but since this force is non conservative, the work done this force will not account for any potential energy change, instead, it's lost. The balance in energy between the two positions will thus only tell you that the change in potential energy is the work of the weight force, which is not helpful for the determination of $\alpha$.

Not the answer you're looking for? Browse other questions tagged homework-and-exercises newtonian-mechanics forces energy-conservation friction or ask your own question.

8
Analyzing the motion of a ball rolling without slipping inside a hemispherical bowl
0
Work done by a frictional force on a cylinder
2
Calculating coefficient of friction
0
Why does Newton’s first law not hold in this question?
0
Ring motion in an hemispherical bottle
1
Getting different results when doing the Lagrangian of a simple pendulum with different coordinates