How does Pauli's Exclusion Principle relate to a quantum superposition of states?

Pauli's Exclusion principle states 2 fermions can not occupy the same quantum state. However, a particle can occupy a superposition of quantum states. Does this mean you can have an infinite amount of particles occupying a slightly different superposition of states where the superposition of states all have the same two basis states? See comment for an example. This has been answered before here but I don't understand the mathematical notation. I tried searching up bra-ket notation, anti-symmetrizing function, and whatnot, but found it confusing.

The Pauli principle states that the full many-body fermionic state must be antisymmetric (i.e. pick up a minus sign) under permutation of any two fermions. If you have 2 fermions occupying any two states $\psi$ and $\phi$, then the 2-fermion state will be (up to an overall phase and normalization) $$ \psi(1)\phi(2)-\psi(2)\phi(1)\, . $$ This generalizes to a determinant if you have $n$ particles.

There is no infinite number of particles. Usually the states $\phi,\psi$ are orthogonal so it’s not clear what you mean by “slightly different superpositions”. The coefficients of each term in the superposition cannot be varied continuously since $$ a\psi(1)\phi(2)-b\psi(2)\phi(1) $$ is only fully antisymmetric if $a=b$.

Note that the non-interacting wavefunctions form a complete set so that the “true” wavefunction which includes the interaction terms can be expressed as a linear combo of (possibly very many) determinants, each individually fully antisymmetric.

The space of spin states for a single electron is two-dimensional (spanned, say, by UP and DOWN in whatever direction you care to choose).

Therefore (by simple algebra) the space of antisymmetric spin states for a pair of electrons is one-dimensional (spanned by the single vector $\hbox{UP}|\hbox{DOWN}-\hbox{DOWN}|\hbox{UP}$ ).

Therefore when you projectivize the state space (and account for the Pauli requirement that the state of the ensemble must be antisymmetric), there is only one possible spin state for a pair of electrons.

Further simple algebra shows that the space of antisymmetric spin states for a triple (or more) of electons is zero-dimensional, leaving no possible states at all when you projetivize.

Pauli says that fermions are of the negative kind. And this is extendible to many particles, by swapping places two at a time and putting a negative sign. This is easily applicable using Slater determinant.

Coming to Aaron’s comment, let us consider $N$ particles that are in up eigenstate along slightly different directions. 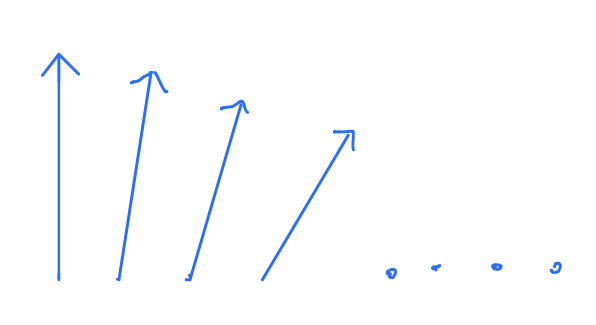 But since they are fermions, we need to antisymmetrise the state which we do by the means of a slater determinant that we symbolically represent by: $\hat{\mathscr{S}}|0123...N\rangle$

Now if we want to express our base state in terms of up and down along $z$, then we have to relate up along $n(j)$ to up along $z$. This is done simply by the rotation operator $\mathscr{D}(jd\theta,x)$ acting on $|{\uparrow}\rangle$:

But this representation is complicated in that when we exchange a particular particle, we must ensure to change both the corresponding ups and downs.

Not the answer you're looking for? Browse other questions tagged quantum-mechanics superposition pauli-exclusion-principle or ask your own question.

7
What does the Pauli Exclusion Principle say about a superposition of spin states?