Are questions about "when" an event outside the visible universe occurred meaningless?

It seems to me that the answer is yes, first of all because it is impossible in principle to use Einstein's definition of simultaneity in such cases since signals cannot pass from the event to us, and secondly because spatial points or objects at such events are moving away from us at superluminal velocities, and the Lorentz formula gives imaginary number results for the time shift at such velocities. But can anything more be said about this situation?

They are not completely meaningless, but they can be meaningless as is shown in the particular case of quantum entanglement.

I must correct one thing you say. Events are not moving at superluminal, or indeed any other, velocity. An event is, by definition, a point in spacetime $(t,\mathbf x)$. As it has particular time, it cannot be moving.

Strictly speaking, an event outside the light cone is only defined later, when a signal from the event reaches ourselves. However, in so far as physics is deterministic (as is all classical physics) the definition is unique, and in effect, determines the "when" of event (in given coordinates, usually, but not always determined from Einstein's definition of simultaneity). Since the "when" of the event is ultimately uniquely determined (in given coordinates) it may be taken to be always meaningful.

This changes in quantum theory, since it is not deterministic. Hence most of the confusion concerning entanglement. The correlation between Alice and Bob's measurements only becomes meaningful later, when the results of their measurements are brought together. In this case it in genuinely not meaningful to ask which measurement takes place first, and it is not possible to say that one measurement altered the other when the events were outside the light cone.

The above applies in special relativity. In general relativity we do not use Einstein's definition of simultaneity. Instead we use "cosmic time", 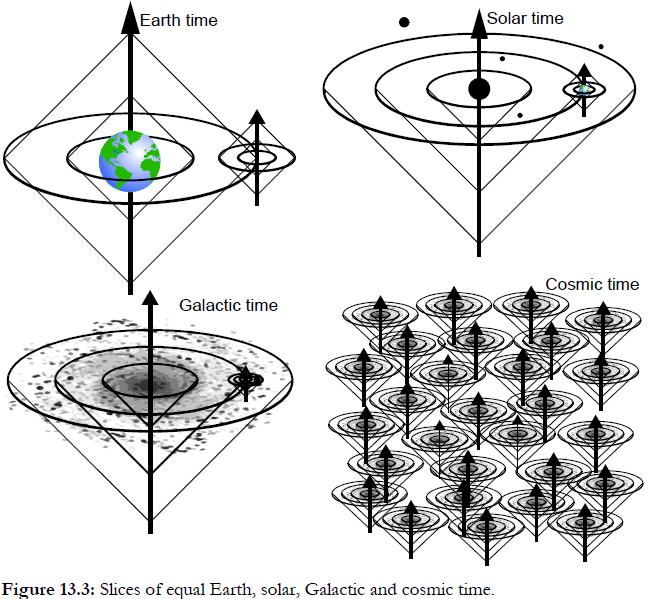 In 1923 Hermann Weyl argued that in order to discuss the distant we should base our ideas, in so far as is possible, on what we can observe in our own neighbourhood. Weyl noted that we define synchronous slices of space in our own neighbourhood of the universe, and assumed that it is possible to extend this definition by defining a synchronous slice in a region centred on a point at the edge of our neighbourhood. An observer can use the radar method to define synchronous surfaces in his neighbourhood with respect to his own proper time, as we do when we define time in the Earth frame (figure 13.3, top left). Earth time may be synchronised to solar time, measured according to the Earth’s orbit and applicable to planetary orbits (figure 13.3, top right). We may further synchronise to galactic time (figure 13.3, bottom left), where the radar method is not viable, but in which the time of an event can be estimated from the distance travelled by light. Cosmic time assumes that it is meaningful to think of a time parameter synchronised across galaxies and groups of galaxies (figure 13.3, bottom right).

Consider two ships with equal velocity moving due east at different latitudes. On a Mercator projection one ship will appear to move faster than the other. But this is a property of the map, not a property of the ships. The same is true for recession velocities greater than lightspeed.

1
Angle between two momenta in particle physics (principal axis of a two-body decay vs. center-of-mass motion in the lab)
0
What is disadvantageous about measuring time events using light signals sent from events?
0
Are there continuous spacetime events?
3
Is it possible to learn about an event that occurred outside of your observable universe?
4
Is relativity of simultaneity being violated in accelerated frames?