If I understand it correctly, the answer by @ACuriousMind was that the vacuum is degenerate even in presence of a gauge field. However, here is a lecture by Prof. Gerard 't Hooft which seems to disagree. Between $10$-$11$ minutes he emphasizes that the vacuum is actually gauge-invariant and non-degenerate or unique!

Can someone explain what makes the vacuum of a gauge theory unique, if really so? I failed to understand Prof. 't Hooft's line of reasoning. Below are two screenshots from this lecture. From the slide below, the comment about the vacuum is important 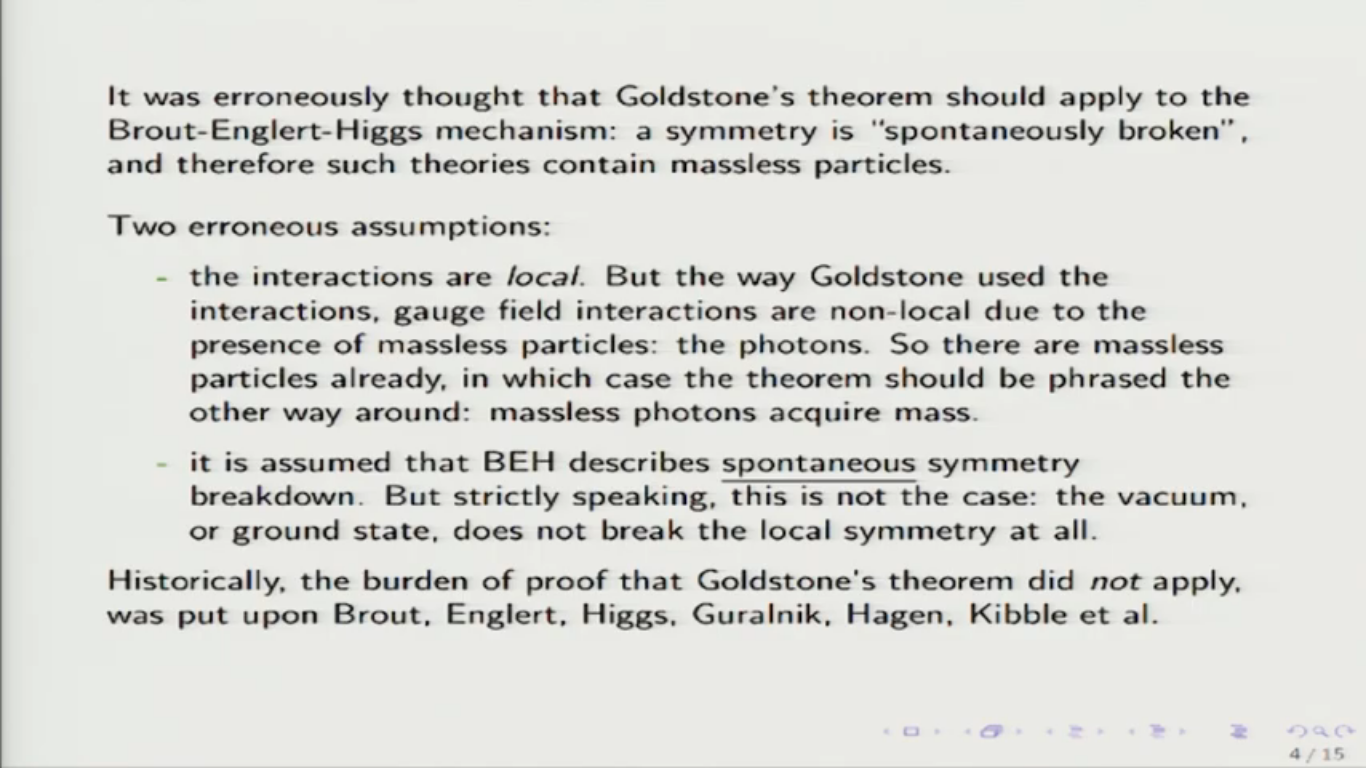 Again, the comment below regarding the vacuum of gauge theory is important 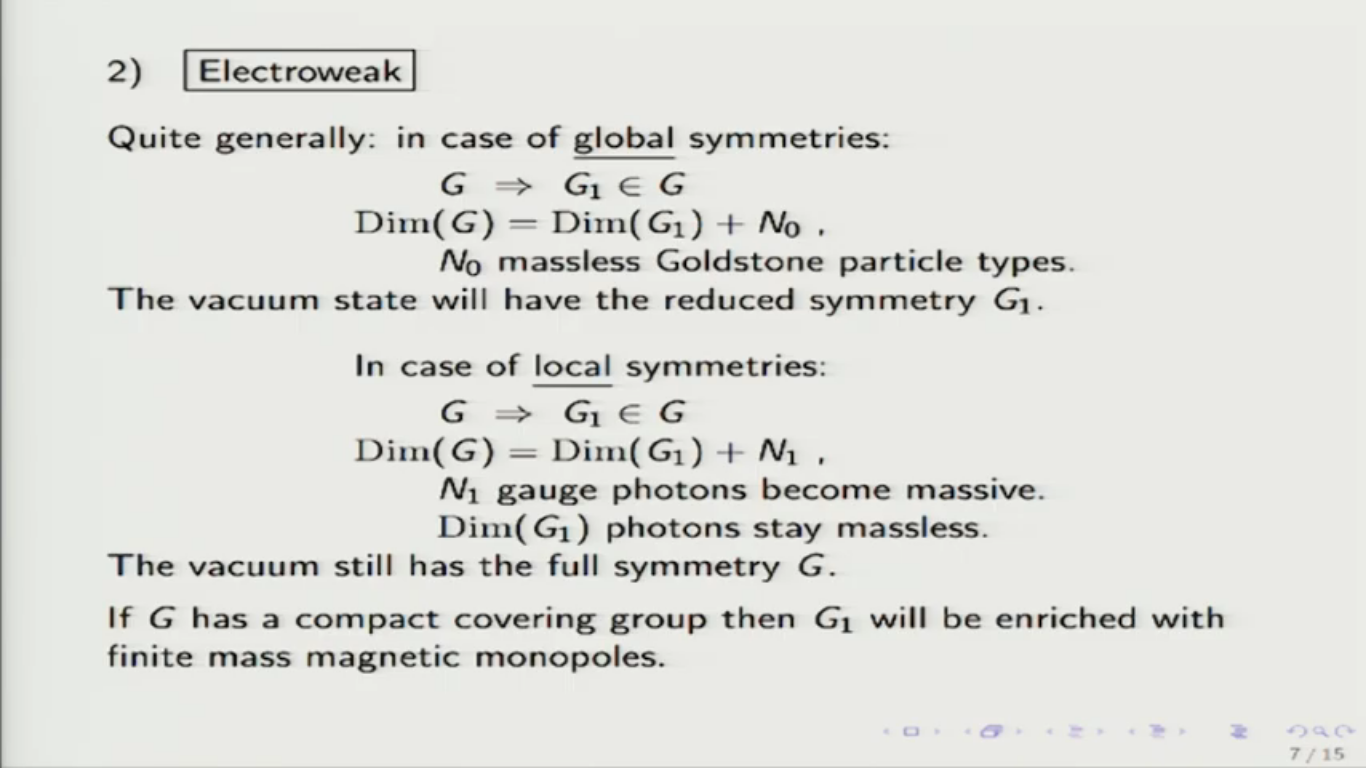 Unsurprisingly, 't Hooft's claim is correct: the ground state of the Higgs phase is unique. More generally, in any gauge theory, the ground state will be invariant(1) under all gauge symmetries (including the global subgroup).

The easiest way of seeing this, is by noting that a gauge symmetry is unphysical whereas a (ground) state is physical---and hence the former cannot affect the latter. However, it seems this argument leads to confusion, especially when it is sometimes claimed that the global symmetry is not a 'gauge' symmetry and hence can be broken. This is wrong. Fortunately, to clear up this perennial confusion, we don't even need to presume that what we are talking about a gauge symmetry. Instead, one can make the argument for general local symmetries, independent of whether or not they are 'gauge' or otherwise(2). So, for the rest of this post, I will refrain from using the words 'gauge' and rather use the words 'local' (and 'global'). More precisely, I will explain:

The first part of this claim is that we cannot spontaneously break the local symmetries. This is the content of Elitzur's theorem, and there is already a beautiful post by Dominic Else on this.

The second part of the claim is that the corresponding global symmetry is also unbroken. This is in fact an easy consequence from the previous point since the global symmetry is a special case of the local symmetry. For instance, suppose the ground state is invariant under a local gauge transformation of the particular form $$ \psi(x) \to e^{i\lambda_n(x)} \psi(x) \qquad \textrm{ where } \lambda_n(x) = \left\{ \begin{array}{lll} \theta & & \textrm{if } x \in [n,n+1), \\ 0 & & \textrm{otherwise}. \end{array} \right. $$ Then it will clearly also be invariant under doing this many times: $$ \psi(x) \to e^{i \sum_n \lambda_n(x)} \psi(x) = e^{i\theta} \psi(x), $$ which is simply a global transformation!

It is sometimes pointed out that the subgroup of global transformations does not affect the gauge field. This is true. But that in no way implies that one can spontaneously break it (and indeed, the previous paragraph shows that it is in fact impossible).

(1) Note that this does not exclude degeneracies for other reasons such as topological order. However, this does not happen in the Higgs phase

Not the answer you're looking for? Browse other questions tagged symmetry gauge-theory higgs symmetry-breaking gauge-invariance or ask your own question.

3
Is the vacuum of a local ${\rm U(1)}$ gauge theory unique?
32
What role does “spontaneously symmetry breaking” played in the “Higgs Mechanism”?
4
Gauge fixing, Lorentz invariance and positive definite metric of Hilbert space

4
Gauge invariance or global invariance, which one makes theory renormalizable?
16
Why does the Higgs field fall into the same ground state at all points across space?
10
What is a gauge theory?
5
Vacuum expectation value (VEV) of a Gauge theory - Spontaneous Symmetry Breaking (SSB) - Higgs Mechanism
7
How can QED have degenerate vacua without superselection?
4
Gauge fixing, Lorentz invariance and positive definite metric of Hilbert space
2
Is the time evolution of physical fields unambiguous without fixing a gauge?