How does a floating object affect the hydrostatic pressure in the fluid? 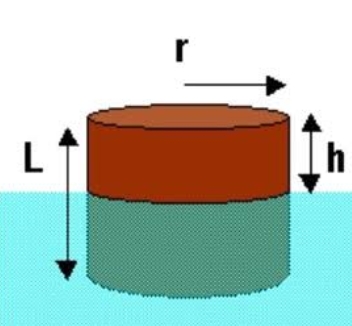 But we know that since the object is stationary, so it's weight is equal to the buoyant force. Therefore

But this is exactly the pressure at any other point which is not under the floating block. Therefore, the pressure is same everywhere at the bottom of the container.

Note: Although we assumed a constant cross sectional area while deriving the pressure constancy, still the result obtained is very general and true for any shape. This basic outline of the proof can be extended easily to prove the constancy of pressure for any other irregular body.

Let me make it clear, that introduction of the floating object doesn't make any pressure difference. You're right that there must be an equal and opposite reaction force to the buoyant force as per Newton's third law. However, even when there was no object, the liquid below a particular volume exerts upward force equal to the weight of liquid above it and has it's own action-reaction force pair.

But if we take the increase in the level of liquid in the container (due to the liquid displaced), then the pressure increases. The effect of placing an object is same as pouring an equal weight of liquid into the container. The following diagram illustrates this fact:

The hydrostatic pressure in all the four cases in the following diagram are equivalent:

In short, in fluid statics, the pressure depends only on the level of liquid in the container and is independent the object floating.

Not the answer you're looking for? Browse other questions tagged pressure fluid-statics buoyancy or ask your own question.

6
What is the basic reason behind buoyancy?
0
Why exactly is the pressure an object experiences at a given depth in a fluid?
4
Does buoyant force vanish if there is no liquid below an object?
0
Does changing the volume of $\rm Hg$ in the container of a Torricelli barometer affect the height of $\rm Hg$ in the tube?
3
Height of fluid and pressure
0
Problem Regarding Buoyancy
1
Why does the height of an object matter in a fluid?