I was looking at a physics situation involving light, and I can make the correct derivation assuming light is a ray of a given intensity (geometric optics), energy conservation checks out, everything. But when I try to move to a wave model of light to take into account interference, nothing works out anymore - I get completely different results. And I don't know why. It's driving me insane.

Here is the situation. Find the total reflected and transmitted light intensity from/across this layer. 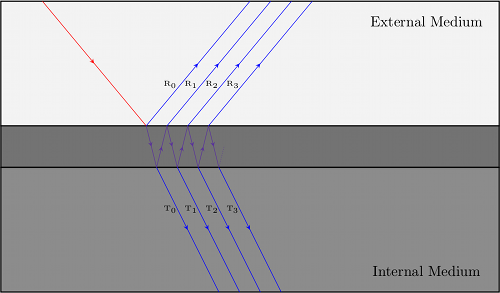 A similar derivation gets the reflected intensity, and they correctly add up to 1, as expected.

Now assume light is a wave, the layer has thickness $\delta$ and the incident wave (in red) has wavelength $\lambda$.

The phase shift for the $k$th transmitted wave is (assume no phase shift due to reflection):

Where $\theta$ is the angle made by the light wave inside the layer (depends on incident angle).

Then, the transmitted intensity is:

Which isn't even close to the right result! This is completely meaningless.

I understand this isn't an elegant way to do electromagnetics and it makes a lot of assumptions (I am not a physics student, this is for computer graphics) but I don't understand why the two models don't give the same answer? I know I'm making a mistake in the second one but I can't find it. I thought this is how you add waves and I feel my sum is correct but the results still don't agree with the geometric optics result. Note I removed the $\omega t$ part from the wave since it cancels out in the end.

I guess an equivalent question would be, could someone show me the correct wave optics derivation (which should average out to the geometric optics solution over all possible phase shifts, as noted in comments)? Because I've spent days on this problem and I'm really at my wit's end at this point.

EDIT: after putting Mathematica to work on this, it turns out the wave optics average is equal to the geometric optics solution, with one small issue: it's telling me that $|\text{t}|^2$ is equal to the transmittance $\text{T}$, which is apparently wrong according to the Wikipedia Fresnel article, where:

But at least it looks as if I wasn't completely all wrong. So now I just need help on understanding why the transmittance coefficient doesn't work out as it should..

Both results are correct. As Luboš Motl pointed out in his comment, we can get the geometrical optics approach answer from the wave method answer by averaging it over 1 full period.

Perhaps you made a mistake somewhere when averaging.

If we calculate the average carefully:

you can check here

now it's not hard to see that

same as the one obtained from geometric optics method

EDIT(to respond to the EDIT part of the question):

First of all, let's make everything clear so that the equation that you quoted from Wikipedia make sense. The amplitude here means the magnitude of electric field. The $t$ simply means the ratio of transmitted and incoming electric field (We were using different definition of $t$ in the calculations above, the $t$ that we use above includes other factors beside the ratio of electric fields). And the transmittance $T$ here represents the fraction of power transmitted to the medium 2. Here the power $P$ is proportional to

so from the new definition of transmittance $T$ we get

and since the incoming and reflected rays have the same $cos\theta$ and $n$, the reflectance is simple

we have calculated that

Thus again we have

I do not know how much you want to calculate with waves and exponential functions but it is excellent explained in Classical Electrodynamics Third Edition: John David Jackson Chapter 7.3. Reflection and refraction of Electromagnetic Waves at a Plane Interface Between Dielectrics. Unfortunately, it requires a little bit of mathematics but as you are asking that I assume you know the required basics. Jackson calculates the electro-magnetic wave composed of electric and magnetic field.

1
Getting nonphysical results when solving for the index of refraction of a slab?
4
Calculating reflection of light when the refractive index changes continuously
1
Do the Fresnel equations of reflection apply to monochromatic light?
1
Using Snell's law in transmission and reflection coefficients
0
What's the condition for the intensity of the interference of light to be zero?
1
How do I compute a Mueller matrix for a refracted ray?