Why does a person float rather than staying in the elevator's floor in a free fall?

When we analyse the situation from a freely falling elevator, an non-inertial frame of reference, we need to apply inertial (pseudo or fictious) force in order to apply the familiar Newton's laws of motion. Here, the pseudo force acts in the upward direction and cancels the weight of the person. The net force on the person is zero.

The following diagram shows how the inertial force and the gravitational force on an object in a freely falling elevator cancel each other out, thereby leading to weightlessness: 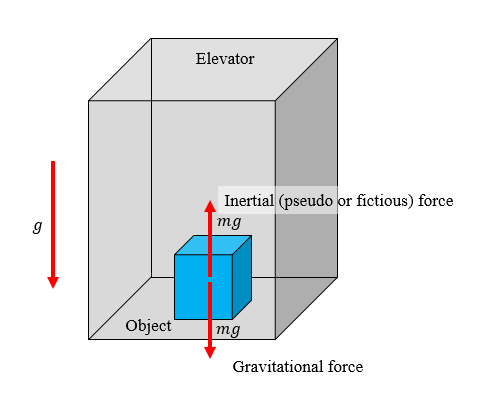 Now let's imagine that you're in an elevator of a very tall building. When the cables of the elevator are intact, you'll be standing on the elevator's floor and the floor would exert normal contact force on you. When the cables are cut, the elevator accelerates downward with acceleration equal to the local $g$ (assuming no friction with the rails and zero air resistance). Your feet will still remain in contact with the floor. However, you'll no longer feel the upward force exerted by the floor on your feet. If you lift your legs up, you'll not move down opposed to what happens normally.

I find the first video of Albert Einstein in the elevator to be quite accurate. Once the elevator starts its free fall, he doesn't spin randomly. He stays upright and when he lifts his legs, he just looses contact with the floor. However his centre of mass remains in the same position (with respect to the lift) if we assume he doesn't kick the floor or the walls of the elevator.

The second video in the question is not from a freely falling elevator however. It's taken in a reduced gravity aircraft. These aircrafts follows the following trajectory to simulate reduced or zero gravity environments: 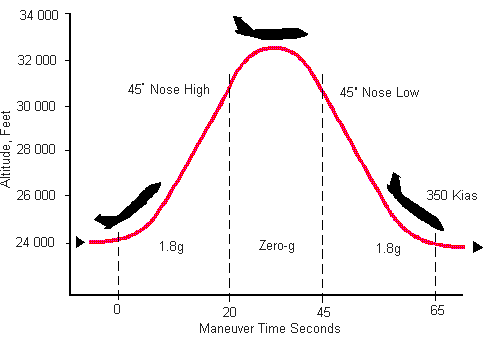 If you're interested in how such aircrafts stimulate reduced gravity environments, I've given a short explanation in this answer.

Yes, they would stay in the same place... Except for the fact that from the elevator's frame any slight push upwards will propel you and you can't stop that... Like if you were in a space station. In the second example you gave you can clearly see that all the people push upwards which causes them to float.. if you stayed perfectly still you would still be on the floor.

While other answers are not wrong, I'd like to add that the main reason why someone's feet can't stay on the ground in free fall is that any time there is a slight pressure or bump between feet and floor due to body movement, the contact force will push the feet upwards. Since no other forces are involved, the feet will keep floating away from the floor.

Additionally, legs act like slightly compressed springs : when free fall starts, the muscles that were still tensing to counter gravity will keep pushing the floor, so the reaction force of the floor will keep pushing the feet up, even though it's weaker and weaker as the legs "extend". By the time the forces reach zero because the legs are no longer "compressed", the center of gravity of your body has acquired some speed relative to the floor so you float away.

Note that in the first example, Einstein's body should have had a speed relative to the elevator, since his feet were already far from the floor, resulting in his head bumping in the ceiling. Which we can confirm by looking at the second video (but the plane isn't perfectly in free fall obviously so relative speed can vary a lot).

Not the answer you're looking for? Browse other questions tagged newtonian-mechanics forces newtonian-gravity reference-frames free-fall or ask your own question.

8
How can we artificially reduce gravity on a planet to live there?

1
1D Kinematics - Relative Motion involving non-inertial frames of reference
7
What would a person experience in a free-falling elevator in a shaft long enough to reach terminal velocity?
0
Understanding negative g-force?
0
Kinematics of bouncing ball
6
Why an accelerometer shows zero force while in free-fall
0
Question about the Normal Force exerted by Planet Earth in relation to centripetal force
1
Regarding the objects in free fall in the ISS
2
Falling elevator filled with water