What I'm trying to say is that $$S=\int\limits_{T_1}^{T_2}\frac{\mathrm dQ}{T}\tag{1}$$ depends only on the initial and final states. Why is that so? Is it like a "law" (like Newton's law of gravity or any other law instated by Nature) or somehow can it be deducted that even though temperature ($T$) and heat supplied ($\mathrm dQ$) vary depending on the path taken, $S=\int\limits_{T_1}^{T_2}\frac{\mathrm dQ}{T}$ will be independent of the path?

to be valid you have to assume that a process, including the heat transfer, is completely reversible. The system is in thermodynamic equilibrium throughout the entire process. For this reason also the index $rev$ is used. This is generally not the case as friction is involved but for modelling some processes you assume such an ideal "comparison" process where the direction of every heat transfer is assumed to be arbitrary as well (continuous quasi-equilibrium), e.g. reversible cycles in thermodynamics where the starting point of your cycle is equal to the endpoint. In this case the thermodynamic entropy is a state variable.

I have already taken some notes on it a while back and I will simply copy and paste them over here. The following section explains what qualifies a state variable and derives why this is the case for the entropy. The basic idea is that for a state variable the order of derivation with respect to the underlying variables does not matter. It is shown that for a perfect gas and a reversible paths the specific heat is no state but instead a process variable but introducing an integrating factor $\frac{1}{T}$ a state variable, the specific thermodynamic entropy $s_T$, can be generated.

In thermodynamics one distinguishes between two main types of quantities: State variables depend only on the current equilibrium state of a system and do not depend on the path it has taken to reach the corresponding condition whereas process variables are an adequate measure for the path taken to reach the corresponding state. In order to differentiate these two types of quantities the latter is generally denoted by small Greek delta $\delta$ instead of exact differentials $d$.

For a state variable $f(u,v)$ (a function of two arbitrary variables $u$ and $v$) the order of derivatives does not matter, the symmetry of second derivatives, the Schwarz's theorem

must hold: The order of the derivatives has no impact on the change of the state variable.

One main measure of the state of a thermodynamic system is the so called internal energy, an abstraction for a variety of different forms of energy such as kinetic and rotational energy of the corresponding molecules that reflect the internal state of a fluid regardless of the macroscopic fluid flow. The change of the internal energy can be described using temperature and volume as

The first law of thermodynamics for a closed system

The change of the internal energy may be described using a basic conservation of energy given by the first law of thermodynamics. A closed system is able to store energy either in macroscopic external energy $E_{ex}$ such as potential or kinetic energy of the fluid flow or the aforementioned internal energy $E_{in}$. These quantities are state variables and are therefore denoted with exact differentials. 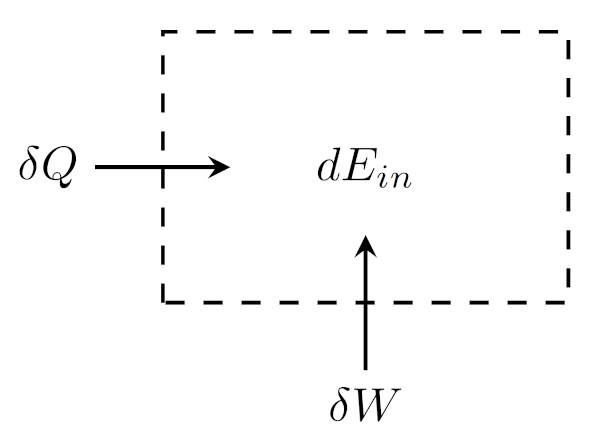 For a closed system (no mass transport) the energy can only be changed by the work $W$ and heat $Q$ transferred to the system, which generally depend on the exact process path and therefore are denoted by partial differentials. The most common type of work is the expansion of the corresponding control volume against the surrounding pressure $p$ that can be calculated to $\delta W_V = - p \, dV$. Therefore for a closed system the following energy budget must hold:

So far no assumption regarding the equation of state was made. However, the equations are simplified significantly when assuming gases characterized by simple interactions. One such simplified model is the ideal gas, an idealised model of a real gas where particles of infinitesimal size interact with each other only in elastic collisions. This allows for a simple description including a very simple equation of state given by

but rather only a function of the temperature

An even more basic behaviour can be achieved by neglecting the intermolecular forces resulting in constant heat capacities. Such a model gas is referred to as a calorically perfect gas.

Considering an isochor system, meaning the terms including $dV$ vanish in equation \eqref{5}, and dividing the equation by the mass $m$, results in an equation of the specific heat

is referred to as the heat capacity at constant volume. Analogously the enthalpy $H$ is introduced as

Dividing by the differential of the temperature $d T$ we yield

Entropy on the continuum level

In classical mechanics all laws are reversible: The laws are deterministic in the past as well as in the future, they are essentially symmetric in time - Information about prior states is not lost but instead conserved. This contradicts though our perception of the world as heat always flows from points of higher temperature to points of lower and thus gives the physical laws direction. Nonetheless using the findings from the section above as well as assuming a fictive reversible process, where also the heat flux may be arbitrarily reversed, we are able to formulate the specific reversible heat for an ideal gas as (dividing equation \eqref{3} by the mass $m$ and further considering an ideal gas $ \left( \frac{\partial e_{in}}{\partial \hat v} \right)_T d \hat v \approx 0$)

If the heat was a state variable it would have to fulfil the symmetry of second order derivatives. This is though not the case due for a perfect gas as (right-hand side of equation \eqref{6} and the ideal gas law \eqref{4})

As $c_v$ is by definition independent of the specific volume the left side is equal to zero whereas the right side in the case of an ideal gas yields $-\frac{R_m}{\hat{v}}$. If the temperature on the right side would not appear, the Schwartz's theorem would be fulfilled and we would have found a state variable. This can be achieved introducing the thermodynamic Clausius entropy $s_T$, using the integrating factor $\frac{1}{T}$, which yields

This is sort of an obscure state variable as its meaning is not directly accessible at first. For reversible processes, where the heat flux may be assumed as reversible, this entity vanishes whereas for every irreversible process, where losses due to dissipation happen, which is the norm for common processes found in nature, but no energy may be discharged (closed system), it steadily increases (second law of thermodynamics). Entropy is responsible for the asymmetry of physical laws in time, it gives processes direction: Differences in temperature drive every process and are the source of this irreversibility. Integrating the differential definition (equation \eqref{7}) assuming a perfect gas yields

First, regarding the equation, it should be

Why is that so? Is it like a "law" (like Newton's law of gravity or any other law instated by Nature)

As a matter of fact it is. Entropy is a property of a system that depends only on the initial and final states. It's in part a consequence of a law of nature that heat transfer has never been observed to occur spontaneously from a low temperature body to a high temperature body. The Clausius statement of the second law is

Since the spontaneous transfer of heat from a cold to hot body did not violate the first law of thermodynamics (conservation of energy), the second law was developed. The second law had to recognize the fact that heat can only naturally go from a hotter body to a colder body. The law necessitated a new property that not only takes into account conservation of energy, like the first law, but also the direction in which natural processes are possible, including the temperatures that dictate the direction of heat transfer.

The second law says the total change in entropy of the system + surroundings is equal to or greater than zero. This is sometimes referred to as the principle of entropy increase. Therefore, according to the second law:

To illustrate how the second law precludes the possibility of spontaneous heat transfer from a cold body to a hot body, consider heat transfer between two bodies A and B that are thermal reservoirs (constant temperature heat source and heat sink). Either body can be considered the system or surroundings.

Applying the second law for the total change in entropy

Now let's instead consider the possibility that heat transfer occurs in the reverse direction, that is from the colder body B to the hotter body A. Applying the second law for total entropy change we have

Not the answer you're looking for? Browse other questions tagged thermodynamics statistical-mechanics temperature entropy or ask your own question.

0
Rate of water temperature change
5
Is existence of incompressible bodies prohibited by Carnot's theorem and Clausius' inequality?
1
Second principle of thermodynamic and heat flow
0
Entropy generated for a warm bath heating a cold rock
1
Third law of thermodynamics conundrum with cyclic machines
0
Applying the Clausius Inequality to Three Systems
0
Why is $c_{p,avg}$ used in a process that involves the change of pressure?