What happens to light in the middle of a BH binary?

A BH binary is a system of two black holes orbiting each other in close orbit.

Now on this wiki page, there is a simulation of the merging black holes, but it is not black in the middle, between the two black holes. This could give you an idea, that the middle is an area where light can still escape (pass through). 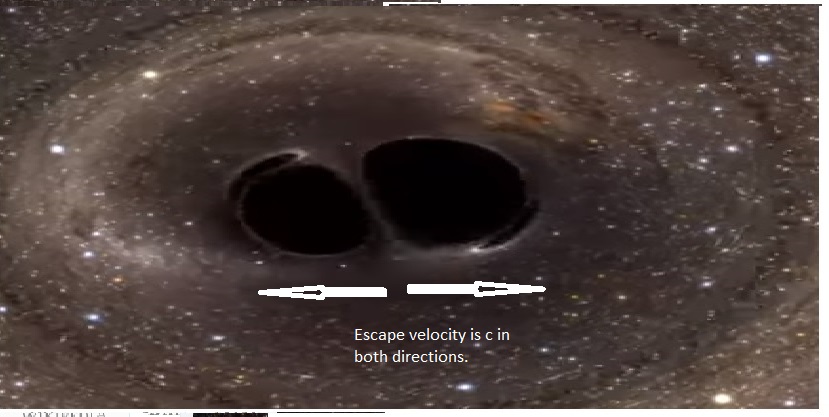 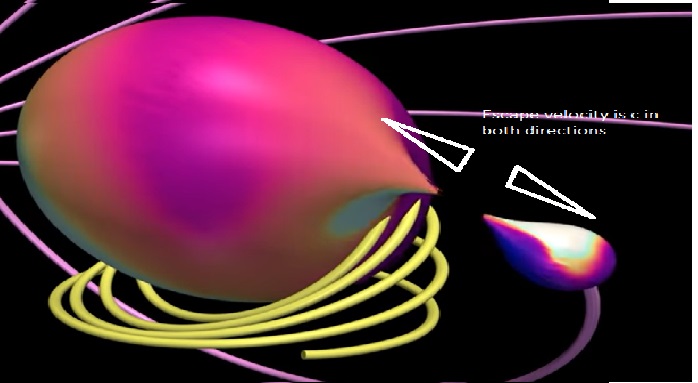 Can we exit the event horizon of merging black holes?

No. When they merge their horizons will change shape, and eventually become the static or stationary shape of a BH horizon. Nothing inside either horizon while this is happening can escape. At all times the timelike curves stay inside, and the deformed horizons are where the lightlike curves end up. In each, and after they merge.

So when the two event horizons start touching each other(joining), there is a point where the individual event horizons open up, and there might be some light right where that happens, my question is, what happens to that light? Based on the answer, it should not be able to escape, but if not, then which singularity will it start moving towards?

As I understand, the event horizon is the area, where the extreme curvature just reaches the speed of light, meaning that the curvature is so, that it causes the escape velocity to be exactly $c$.

Now when the two event horizons meat, or join, the escape velocity should be c in both directions, towards both singularities? Which way will light move?

What happens to light in the middle of a BH binary?

Before two Black Holes merge the trajectory of the light between them is given by the spacetime geometry of the system. The light either escapes or "falls" into one of the two black Holes. The bizarre case that the position of the photon coincides with the position where the two Black Holes (their horizons) "touch" each other would mean that this photon being now inside the newly formed Black Hole moves towards its singularity.

Not the answer you're looking for? Browse other questions tagged electromagnetism general-relativity black-holes speed-of-light event-horizon or ask your own question.

3
Can we exit the event horizon of merging black holes?