How does a telescope make an image larger by shrinking it?

I saw these images of how a telescope works and it seems like it is shrinking the image down to the size of the eye. I don’t understand how that makes the image bigger. My thinking is that shrinking an image makes the image obviously smaller and you lose details. What am I not getting here? 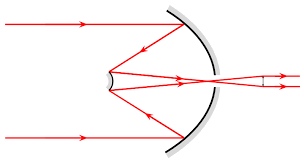 While a telescope can make an image larger, the diagram shown above doesn't really show that happening.

Your eye perceives the size of an image based upon the angular extent it takes up in the visual field. A ball that takes up one degree of your field would look larger to you if it took up five degrees of your visual field instead. This could happen by moving it closer to you, or by using an optical magnifier.

So a telescope (or similar) will magnify an image by changing the angles through which it is seen. Because only one set of parallel rays are drawn (and they are shown as parallel again when passing through the last lens), nothing about the magnification of this system is evident.

The other thing a telescope will do is to collect light from a large area and concentrate that light into your pupil. This might not magnify the image, but it would make it brighter. Whether intentional or not, this is what is shown above.

So don't think of the big mirror as "shrinking" an image, think of it as "concentrating" the light. Whether the image is reduced or enlarged depends on the angles at the end, not on the density of the lines.

I think the problem with the original image is that it does not show the subject you are focusing on, so it cannot demonstrate what portion of it you see magnified. Also, the original picture design would present the image upside down. I tried to make a simple picture for you, it is not geometrically perfect (made it in paint) but should give general idea.

Your diagram's mirror configuration corresponds to Cassegrain reflector telescope. The rays that it shows are from a faraway point source situated exactly in the middle of its field of view (FOV), and they are condensed into a smaller output aperture. But this alone doesn't directly* show whether the output image is magnified or shrunk.

Notice how the input rays are at some angle to one another, while the output ones are at a larger angle. This means that, if you look at the original rays—without the telescope—you'll see the objects closer together than when you look through the telescope. Thus this diagram corresponds to the telescope providing a magnified image.

*Indirectly, though, the smaller output aperture does indicate that the image is magnified—due to conservation of etendue, see boyfarrell's answer for details.

I gave the answer above +1 but wanted to mention the concept at play.

Étendue is a property of a light beam. At best, étendue is conserved as the beam propagates through the optical components. This means that the product of entering beams area and solid angle is the same at the exit aperture,

In the case of a telescope, you want to make the angular size larger, namely $\Omega_2 > \Omega_1$. The only way to do this is by reducing the exit aperture area $A_2 < A_1$. This also has the useful effect of concentrating the light rays, which makes the objects appear brighter.

Not the answer you're looking for? Browse other questions tagged optics electromagnetic-radiation lenses telescopes or ask your own question.

26
How to determine what size telescope to buy
0
Can I use one convex lens to create a telescope?
2
WHY is a Refracting telescope image distance $S'=-\infty$?
0
How is it possible that a converging lens can form a virtual image if its function is to make the light converges?
1
How do telescopes work as magnifiers?
10
Why does an image seem smaller through a pinhole when viewing with human eye
0
Is there a difference between the image captured by a big telescope and a small telescope at several points in spacetime?
3
Why does magnification work?
1
Why is the size of image increasing as observer moves away from lens?