A one-dimentional rigid rod, at rest and initially horizontal, is performing a rotational motion around fixed point O. I painted the last part of length l/3 with different color to focus on that. Given that $I_O = 1/3ml^2$, at $t = 0$, rod OA has a rotational acceleration $\theta ''= 3g/2l$ and AD part a center of mass acceleration $a_K = 5g/4$. To have an acceleration greater than $g$ , OA part must exert a force F to AD at point A downwards. But then, the sum of torques acting at AD around center of mass K tend to rotate AD counterclockwise. How do you explain that? 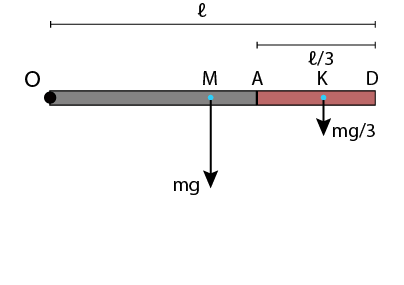 The rod OD is a rigid body. There are internal forces which act to maintain the shape of the rod whatever its state of motion.

Before the rod OD is released from an equilibrium horizontal position, there is an upward force $\frac13 mg$ acting on AD which keeps it from falling down, together with an anticlockwise torque which keeps it from rotating about an imaginary joint at A. If the only external force on section AD is its weight then these forces and torques come from the section OA.

When the whole rod is released so that it rotates about O these internal forces become more complex. The gravitational force on AD together with the forces and torques from OA cause the rotation of AD about O. The internal forces are different than in the stationary position. But they are always such as to keep the rod in a rigid structure which does not bend or extend.

In a more realistic structure such as an elastic beam which can bend and/or extend, it is necessary to take account of the internal forces. In rigid body problems they can be ignored.

2
Solving for motion of rotating rod using only Newton's laws?
0
Do objects rotate around their center of mass or not?