Can you numerically compute a trajectory by direct minimization of the action functional?

Is there a numerical approach to compute simple projectile motion by directly minimizing the action functional?

I was thinking that the trajectory is essentially a least cost path through phase space where the traversal cost is the Lagrangian and the cost is accumulated over time. If the scenario was something like a catapult where the projectile is launched from ground level at a known velocity and lands at ground level, the boundary conditions would be $y(t_i)=0$, $v(t_i)=v_0$, and $y(t_f)=0$.

Numerically, I was thinking the trajectory could be represented as a sequence of nodes in phase space (i.e., integration elements). The first node would be fixed at $(y_0, v_0)$ and the final node would be fixed on the ground, but free to move laterally. The trajectory would be described by the locations of the remaining nodes that minimize $\sum_i L(r_i, v_i)$ subject to the constraint that $\Delta r/ v$ is constant across all nodes. The number of nodes in a trajectory would not change. Consequently, the integration step $\Delta t=\Delta r/ v$ might be different for different trajectories or while the trajectory is being minimized, but that's ok so long as $\Delta t$ is uniform across all nodes in a trajectory. 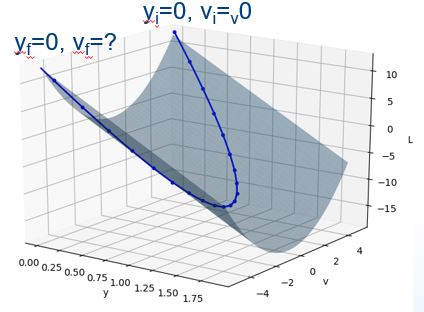 I haven't been successful performing this optimization because (I think) the constraint represents too small a region of the domain and the node locations are treated completely independently. I also tried representing the constraint as a clique potential to make the space smoother, but the minimization was still unstable. Just FYI, I've been using scipy's optimize and experimenting with different solvers.

I started thinking about computing the stationary trajectory because I would like to simulate many similar trajectories. I was hoping that, in this approach, the optimal trajectory starting at $r_0, v_0$ would be a good starting point to optimize the trajectory for $r_0, v_0+\delta v$, and therefore there could be some computational gains. Whereas when performing usual numerical integration, computing one trajectory doesn't buy you anything toward computing an adjacent trajectory. Also, I only want to know where and with what energy the projectile lands, the time dependence is less important.

I haven't been able to find much relevant literature, and so I suspect an approach like this just isn't practical for some reason (although maybe I just don't know the right search terminology). At first I was curious if this could work, but now I'm getting a little obsessed trying to figure out why this won't work given that it's not prevalent.

Now, I am going to deviate, and although you are not asking about initial value problems, I will nevertheless discuss them, as I believe they are conceptually important and may give you some better insight. In order to solve discrete initial value problems, i.e. to find discrete trajectories with a stating point and a direction vector, one can look locally at the discrete Euler-Lagrange equations and write them down using a simplified superscript notation (I basically drop the index $k$ and keep only the increments $-1$ and $1$). $$\nabla_2 L_{h}\big(x_{(-1)},\, x\big) + \nabla_1 L_{h}\big(x,\, x_{1}\big) = 0$$

If you have some extra information, you can use $x_0$ as a starting point and a guess for a second point $x_1$, then run the initial value iteration, using $\Phi_h$, to create a discrete geodesic you can use as an initial guess for your gradient descent algorithm (or Newton's method or whatever numerical scheme you use to solve the discrete variational problem). That's why I have also discussed the initial value problem because one can use it as an auxiliary tool. Or, you could combination of the two methods: one (or more) step with the gradient descend and one trajectory generated by iterating $\Phi_h$.