Voltage as work in electric field and in Ohm's law

I am struggling to reconcile the definition of voltage as work done moving a unit of electric charge between two points in an electric field and voltage in Ohm's law.

In the work definition, everything is more or less clear, but in Ohm's law we are measuring voltage at a point, so work done should be very small since there is almost no distance. Could somebody point me at right reading direction?

While one can specify a voltage at a point, it must always be with respect to another point, sometimes referred to as common, ground or reference point where the voltage is arbitrarily assigned a value of zero. The zero voltage point is typically chosen at the negative terminal of the voltage source.

For the simple circuit below, I have labeled points A, B, C, and D. I have assigned the voltage at point D (the negative terminal of the battery) to be zero volts. The voltages at points A, B and C are then measured with respect to point D.

If I want to apply Ohms Law to resistor $R_2$, the applicable voltage is the difference in voltage between points B and C, or

If I want to apply Ohm’s law to the series combination of the three resistors, it is then

So when you see Ohm’s law written as

$V$ in the equation is meant to be the difference in potential (voltage) across the resistor. 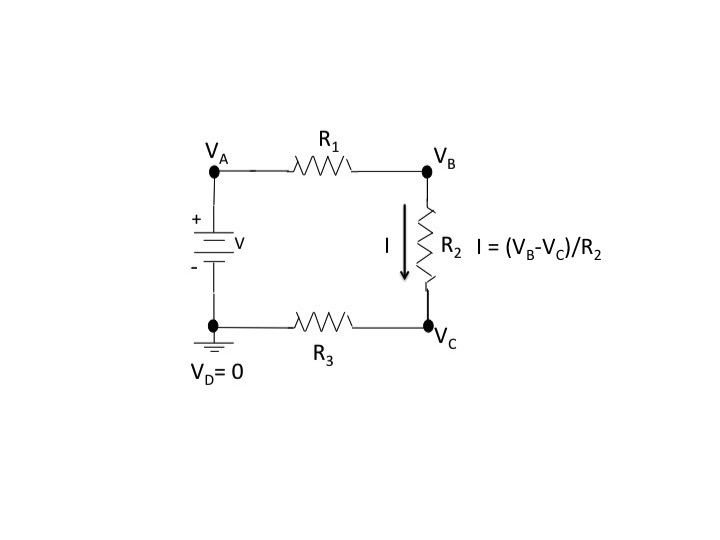 Sometimes notation may induce misunderstandings. It is true that in many formulas voltage appears as $\Delta V$, making clear that it refers to the difference of voltage between two points. However, arrived at Ohnm's law, it is usual to find it expressed as $$ I=\frac{V}{R},$$ thus inducing to think that only voltage at one point is present. Actually in that formula $V$ is the difference of voltage across the resistor. Therefore the numerator on the right hand side of the equation should be written more consistently as $\Delta V$.

That's almost okay, but what's missing is the concept of electrical potential. And technically, you should say "work per unit charge" to get the units correct (volt = joule per coulomb). That's often not discussed in a lower level (high school) first course, but is the basis for voltage. Electrical potential is defined for a point in space and is the potential energy per unit charge added to a system of charge(s) by adding a "test" charge at the point in space (bringing it in from infinitely far away).

Now voltage is the difference in potential between two points in a system, $$V=\Delta\phi$$so voltage ends up being the difference in [work per unit charge done by the electric field] in moving a test charge from [infinity to point A] and [infinity to point B], which is also the net work per unit charge done by the field while moving the test from B to A. The voltage between $3$ m and $5$ m from the $5$ nC charge is $6.0$ V with $3$ m being the higher potential point. The voltage across that gap is $6.0$ V.

An electrical circuit is a complex set of charges and materials which affect how space responds to those charges, but the net result is an approximation model known as Ohm's Law. As @BobD details, the voltage, V, in Ohm's Law is a difference in potential between two points in the circuit, usually across some resistor or set of resistors.

Most importantly, even if the reference potential ($V_D$) is not zero, the voltages across the resistors will not change, and the current in the circuit will not change.

Not the answer you're looking for? Browse other questions tagged electric-circuits work voltage electrical-resistance or ask your own question.

1
Given Ohm's law, how can current increase if voltage increases, given fixed resistance?
1
Motional EMF and Ohm's law
2
Regarding Ohm's Law
2
Why does voltage depend on the conductor resistance in a circuit?
4
How should I think about voltage and power?
0
Work done by electric field in a wire
1
Would we need a battery if there was no resistance?
0
What's the justification for the sign in the formula for work?
0
Voltage and Resistance definition