Is there an intuitive reason for such asymmetry between bosonic and fermionic field usage at such scales?

Edit (6 Jan 2015): After posting this question, I came to know that bosons and fermions (along with bosonic and fermionic exclusion principles) are just two special cases of a more general statistic called Haldane's exclusion statistics. While this may sound like the familiar anyon statistics in condensed matter physics, they are not the same (for example, while anyons exist only in 2+1 dimensions, Haldane's statistics can be formulated for any dimension). For more on Haldane statistics:

So, the question now is, does Haldane's generalized statistics be used to describe non-quantum objects (in finance, sociology etc)?

Actually a paper recently came out, and highlighted in Popular Science, discussing using fermionic field concepts to model crowd avoidance at Netflix. You can imagine that the same concept could be used to consider in any situation where there are large numbers of people competing for limited preferred items.

Now that we have a few minutes, rather than give an expose of linked paper, I find it more appropriate to discuss some theory. First off, fermionic behavior is actually very relevant and widely used outside physics when it comes to economic problems. To illustrate this, first consider the graph below. 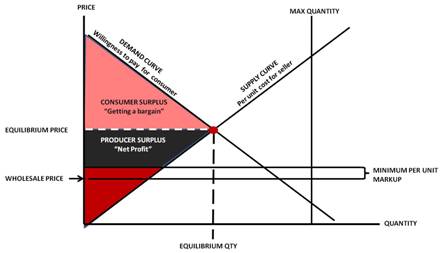 People should recognize this as the standard textbook supply and demand diagram. There are different variations available, but I have made a few simplifications to aid in the explanation. Here both price and quantity are discrete (e.g. all quantities and prices are rational numbers), and are always positive.

To review some features:

Now the seller/retailer (or producer in our graph) wants the price to be as high as possible, and the individual buyer wants the price to be as low as possible. If the price is the equilibrium price, and the supply and demand curves hold true, then seller and buyer will maximize their benefits at the equilibrium price. When the price is lower, the buyer thinks they are "getting a bargain", and when the price is higher then the seller will make more profit off an individual sale. However, if the curves hold true, then the changes in price change the quantities that are sold, and a higher price will result in fewer sales, and a lower price will begin to reduce profits, and the utility of the product to the buyer.

The equilibrium price has an equilibrium quantity associated with it. This is another "fermionic" attribute, it is a natural limit to the quantities of a product that is being sold. It does not benefit the seller/retailer to carry more than the equilibrium quantity of any good within the context of that good. The statement "within the context of that good" is important when one starts considering the case of multiple products, where the function to be minimized is now a function of many goods.

Getting to some equations:

This just tells us that when the difference of the price functions is zero for a particular quantity, then you are at the equilibrium quantity, and the measured inefficiency is zero. For our particular graph we could write:

Where the $K$'s are constants controlling the slopes of the curves and the demand curve has two constant values, one controlling the downward slope, the other controlling the individual's "ground state" price, or rather the price they would pay when the possess none of the commodity (it should be pointed out that this is example specific).

We can expand the minimizing function to account for individual buyers $i$ and individual commodities $j$ as follows:

it is assumed that the supply curve $S(Q)$ for a commodity $j$ is not dependent on the buyer $i$ (e.g. the seller's curve is not tailored to an individual buyer...which is not always the case) but is determined by the total quantity $Q_j$ for some commodity $j$, and that $Q_{total}$ is the total number of items sold across the entire set of commodities $j$.

In our specific example we could write this equation as:

In real systems, it is not likely that sum will $=0$. However, although there are squared quantities, and are not linear individually, the quantities are linear in our summation making it possible to consider linear optimization as a problem solving technique. In addition, the first derivatives of the individual equations should also sum to zero, taking away any particular concern about the squared quantities.

Since the $K_{{D_1}_i}$'s are constants they can be summed and moved to the right hand side of the equation:

It should be pointed out that there is only one optimal equilibrium point, however, if in real systems it can be shown that the optimal point is unobtainable and is instead replaced by some other minimum value, then there may be multiple solutions to a given problem. This means there may be multiple allocation schemes that are deemed optimal.

It should also be pointed out that individuals who understand this simple theory are able to manipulate a given situation by temporarily moving a system from its equilibrium point. This is often a focus of wall street trading, but can make itself apparent in other areas of life. One example that comes to mind is the current use of qualifications in order to limit job opportunities to a select set of individuals.

Although job qualifications can be good by maintaining a minimum standard for employment, they can also be manipulated to limit job allocation to a smaller population. The inefficiency appears when people who are otherwise capable of performing a job are excluded due to some arbitrary set of constraints unrelated to job performance. Recent evidence indicates that some of the current economic malaise is directly associated with a market inefficiency trend in the form of qualification standards. This and many other examples can be shown to represent "fermionic" behavior in financial and sociological settings.

To get to the specific point as to whether "fermionic" models are better than "bosonic" models, the simple answer is that they already have been used and are regularly used, in particular, even the linked paper above discusses how many of these problems simplify to standard type linear resource allocation problems.

As discussed in the comments below and in the linked paper, occupancy constraints by restricting quantities or by reducing utility with increased quantities reflect "crowd avoidance" and thus represent "fermionic" behavior.

Edit Adjusted so that the supply and demand curves were combined in a more intuitive system based on signs of their slope. Further corrected to reflect the need for an additional constant to represent the downward sloping demand curve.

According to this book (p. 61) "[this] paper discusses in detail how a Fermion and Boson field can be used to express the state of the human psyche."

Not the answer you're looking for? Browse other questions tagged fermions statistics models spin-statistics anyons or ask your own question.