Why must energy transitions in hydrogen atom be between stationary states?

In Griffiths QM textbook, he said that a hydrogen atom in the ground state may undergo a transition to some other stationary state by absorbing a photon.

Why must this transition be to another stationary state, which has definite energy?

It does not! The OPs question is really an objection to the textbook presentation.

Atomic transitions are a dynamical process

When a photon or, more generally, a wave packet/driving pulse hit an atom, they set of dynamics of the electrons. In general, these dynamics are time dependent.

When you have very short pulses, you can study or even control the dynamics that happen. To show you that people do that in current research, here is a recent representative reference, where a transition of an atom is observed and controlled in the time domain: Science 354, 738 (2016)

The eigenstate/stationary state picture is useful

Nevertheless, the energy eigenstates of the atom are often still useful, because they can be used as a basis to represent and understand the dynamics. When a weak pulse hits an atom, we can often describe it in terms of a time dependent quantum state $|\psi(t)\rangle$, which in turn can be decomposed into its eigenstate contributions $$|\psi(t)\rangle = \sum_{n \in \mathrm{eigenstates}} c_n(t)|\phi_n\rangle$$ with time dependent coefficients $c_n(t)$.

This is also what the textbook treatment aims at. In addition, in perturbation theory (for weak pulses) one may actually have transitions between stationary states: The atom is in an eigenstate, a pulse kicks it, the atom is in a different eigenstate. The latter effect can, for example, be observed as absorption lines, see annav's answer 1. To understand these phenomena, the textbook treatment is immensely useful.

The transition picture can break down

This transition picture can also break down. For example, when you have very strong laser pulses, the many photons hitting the atom destroy the eigenstate structure, such that the above mathematical description becomes less useful. Essentially, you can have the whole atom flying apart and if you wanted to write the wavefunction for that in terms of eigenstates, you would need a lot of them, which makes the picture less useful.

1 Edit: In fact one can see that the transitions are not fully discrete in the absorption spectra - the absorption lines have a width, which indeed corresponds to the inverse of the life time of the transition. This observation hints at the dynamics taking place, in this case do to decay processes.

I assume you meant the hydrogen atom absorbs a photon, and not an electron.

Quantum mechanics developed slowly during the first part of the twentieth century, and is based on observations that could not be explained using thermodynamics, classical mechanics or classical electrodynamics.

Quantum means a fixed quantity. It was possible to finally reconcile black body radiation, the phote-electric effect and the spectra of atoms by introducing first the Bohr model of the atom, which had by axiom quantized orbits for the electrons about the atom, and finally coming to the Schrodinger equation and the subsequent theory of quantum mechanics.

Continuous energies of photons can be found in various observations where the charged particles are not bound. When the particles are bound there are quantized energy levels defined by the binding potential, and changes happen only in the allowed mathematically energy steps.

For hydrogen, this is the observation: 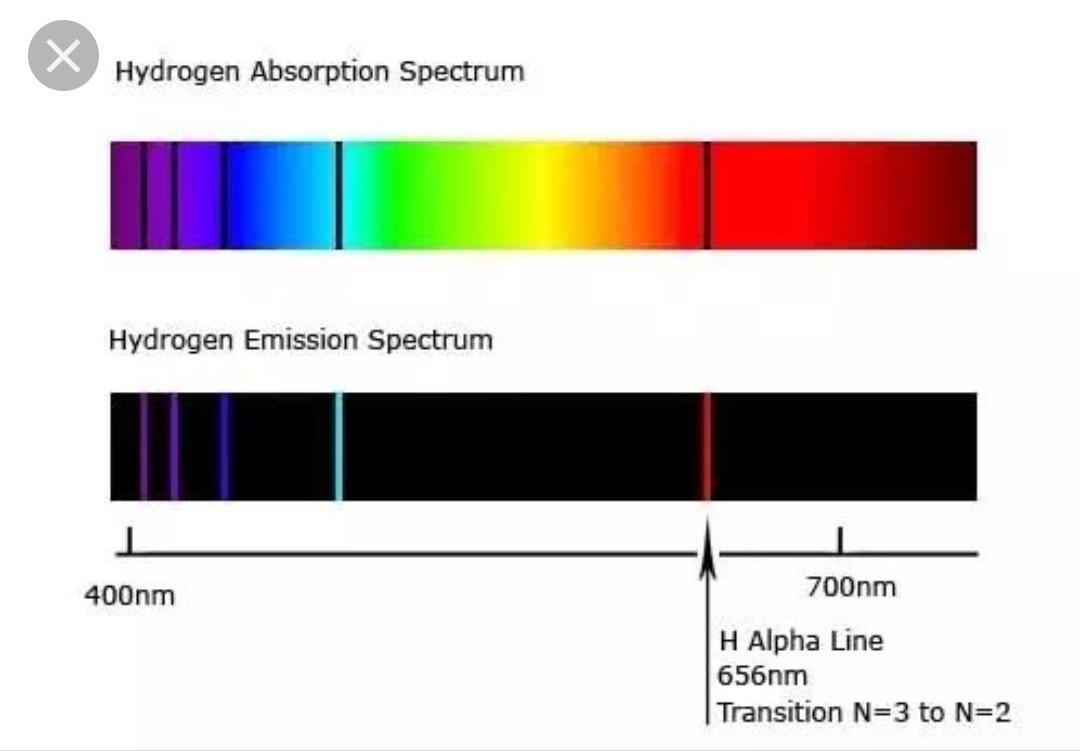 In the classical solution of solving the orbits of electron about the proton, some stable orbits ,like the planetary orbits, could exist ,except they are metastable, and the electron would spiral down at the smallest perurbation, radiating according to classical electrodynamics, and there could be no atomic structure. Bohr, by quantizing angular momentum explained the observed spectra mathematicaly, fitting the series that fitted the spectra. Schrodinger equation and the axiomatic statement of the wavefunction complex conjugate squared defined as the probability of measuring the electron at (x,y,z) defines the orbitals, i.e. probable loci.

Not the answer you're looking for? Browse other questions tagged quantum-mechanics energy heisenberg-uncertainty-principle hydrogen orbitals or ask your own question.

3
What does quantised mean?

23
Why do electrons in an atom occupy only the stationary states?
1
Electron energy in hydrogen
27
Why do non-hydrogen atomic orbitals have the same degeneracy structure as hydrogen orbitals?
4
Hydrogen Ground State Energy
0
How do you observe an atom in an excited state?
0
Absorption spectrum of hydrogen atom
1
Transition $2p \rightarrow 1s$ of Hydrogen Atom