Assumption: Screen detector is much closer to the slits than in "standard experiment" and the small angle approximation can't be used to determine the interference fringe maxima, but the interference pattern still occurs. The point of detector screen being closer is to make the difference between path lengths (from slits to the same point on screen) relatively greater so they could not be approximated as parallel, to make this difference more significant in comparison to the distance between the slits. But it still must be small enough to keep the interference.

I want to know as much as I can about the difference between QM probability wave function propagation of photon interfering with itself and CM paths of photon considered as a classical EM wave or a particle. I think that travel time is an important aspect in this respect.

As I reckon, any measurement at the slits would destroy the interference pattern, so I need to measure the time of photon leaving the gun, so I need the first detector right there.

Is it possible to check the following assumption experimentally: Travel time of SINGLE photon from the gun outlet to the fringe maxima on screen has to be equal or greater than the longer path divided by speed (c for photon). If the time was shorter, the interference pattern could not occur. 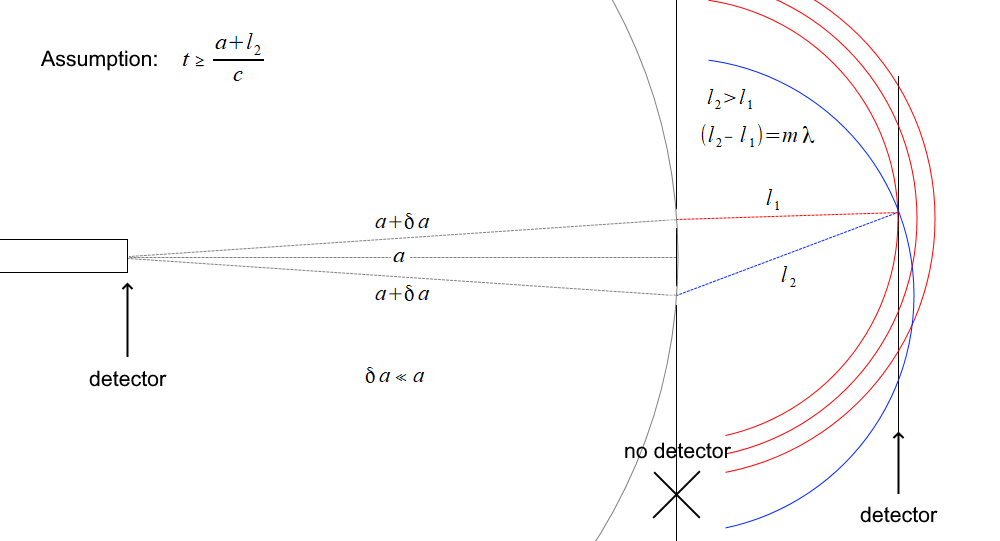 I already know, that I can't measure the time with uncertainty less than $Δt=(l_2 - l_1)/c$ to keep the interference, so let's assume, that we can get one the following, statistical results: 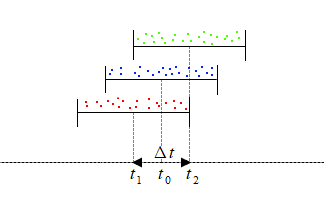 I want to check, which of them will be the closest to the actual experiment result, obtained from multiple, single photon shots. For the sake of argument, let's assume that $Δt$ is slightly greater.

If such setup would make the time measurement inaccurate due to the uncertainty principle or because of any other reason, I still want to know is it possible to determine the probability of detection in certain point and time by solving the Schrodinger equation or it's modification, or derive it from path-integral formulation. If so, I could know the most probable detection time for certain points on screen, especially fringe maxima, and verify the assumption.

Another way of saying "a photon interferes with itself" is to say "somehow the photon knows which path to take". The photon "interference" is an interpretation, not a fact and it does lead to inconsistencies. For example 100 photons passing the 2 slits does result is 100 photons on the screen, there is no cancelling. (i.e no photons in the dark areas).

Feynman postulated that photons take certain paths that are n multiples of its wavelength, other paths are prohibited. A possible interpretation is that an excited atom/electron is acting virtually with the EM field, until at some point the field (influenced by receiving atoms?) accepts the energy and transmits it at the speed of light to a receiving atom/electron. This chosen path is high probability with at least one consideration that the path is n times the wavelength.

Not the answer you're looking for? Browse other questions tagged double-slit-experiment time-evolution or ask your own question.