This used to be one of my favourite experiments in my childhood. When the water in a glass is put into a spin by a DC motor from the top, the things lying at the bottom gets lifted to the top. The effect was particularly interesting because it resembles tornadoes. (Click to see Video)

What causes this lifting?

First of all, let's analyse the effect of the shaft in a particular circular cross-section. When the shaft of the motor rotates, it causes the water surrounding it to revolve around the shaft in a circular path. The flow rate of water near the shaft is more than that away from it. This is a consequence of viscosity of water.

As an illustration, the pressure of a particular layer as viewed from the top looks something like the following image: 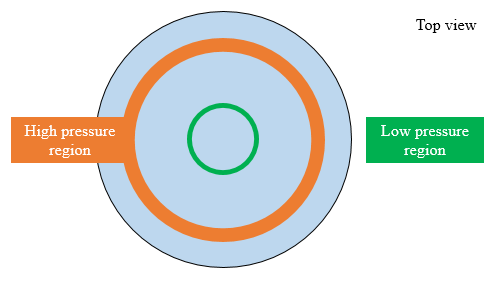 Due to this pressure difference, a particle away from the axis experiences a force towards the centre. Now let's come to your question:

The reason is almost similar to why tornados lift cars, trucks, etc. In tornados the active fluid is mostly air, however here it's water. 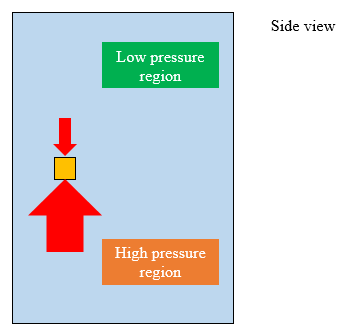 The pressure difference produces lift and hence causes the contents near the bottom to rise above. The object rises up until it's weight is balanced by the lift due to differential pressure on its top and bottom and the buoyant force.

The following diagram shows the order of pressures at two annular regions at two different heights: 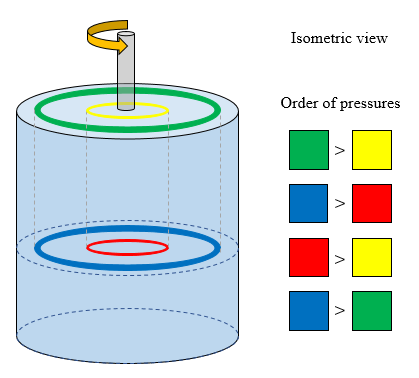 The contents near the bottom rise and due to fluid's rotation these gain some speed in the horizontal direction. The centripetal force required to maintain the circular motion is provided by the differential pressure in the cross section as we discussed in the beginning of the answer. This is why the objects execute an approximate circular motion.

Not the answer you're looking for? Browse other questions tagged fluid-dynamics everyday-life home-experiment or ask your own question.

4
Why do steam bubbles increase in size as they rise?
10
Why do ice cubes come out easier from top trays?
21
Why does the note played by a flute not change in this case when the air column is interrupted?
79
What causes ballpoint pens to write intermittently?
3
Spinning liquid to create a centrifuge effect
8
In tennis, why does topspin serve bounce higher than flat serve?
3
What is wrong with our Cloud chamber setup?
2
Laminar Flow From Outdoor Faucet
0
Elevating a Boyant Object
8
Why does a spinning rod create transverse waves?