Would a laser with four possible energy levels be better than three?

I'm wondering about achieving population inversion for a laser. I learned that without an active medium, it's not possible to create a laser with only two energy levels, but it would be possible with three. What is the advantage of having four levels then?

When you have a three-level system, the laser transition is between the ground and first excited levels (see figure). In this scheme, it is rather challenging to get population inversion because all atoms tend to stay on the lowest level.

With a four-level scheme, you have an extra level so that the laser transition does not end in a ground state. Thus, if the bottom level gets depopulated faster than the top level in the laser transition the population inversion will be guaranteed independent of how fast or efficiently you pump the system. Many lasers, such as Nd:YAG or HeNe laser to name a few, actually use a four-level scheme exactly for this reason. 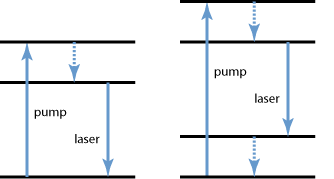 As pointed out in the other answers, you can build perfectly fine lasers with 3-level and 4-level schemes. However, I would like to add that generally speaking, 4-level schemes exhibit a lower inversion threshold (power or intensity) whereas 3-level schemes tend to be more efficient regarding the conversion of input to output power.

In a 4-level system, due to the usually low thermal population of the 2nd lowest energy level, it is easier to achieve population inversion between the 3rd and 2nd energy level (corresponding to the laser transition), hence achieving inversion at a lower pump power/intensity. On the other hand, more energy is lost through non-radiative decays between the 4th and 3rd and the 2nd and 1st energy level, reducing the overall efficiency compared to a 3-level scheme where only one such non-radiative decay occurs.

But this is just a general picture and exceptions will apply.

The lower level of laser transition is above the ground state,this means that the fast non-radiative transfer from the lower laser level to ground state keeps a reasonable population in the upper laser level(3rd) which is fundamental for lasing.Hence its more effective than 3-level system

Not the answer you're looking for? Browse other questions tagged energy radiation laser or ask your own question.

1
Why does an external laser drive only couples certain levels?
0
Laser physics, Population inversion
4
When is a transition radiationless?
0
Can any material be used as a laser medium in principle?
1
Is lasing possible in a 2 level atom if the energy levels are degenerate?
2
Population inversion two-level system
1
Why is four-level laser more efficient than three-level laser?