According Huygens principle when a light wave goes trough a gap that is so narrow that only one wavelet can pass, it would spread out in all directions like in this image:

That would mean that the room after the gap is lit equally in all directions. But its never the case in real life. No matter where you stand as an observer the front will be always the brightest and sides darker. 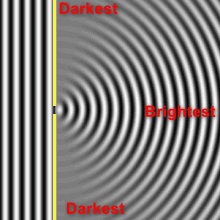 How can that be explained, hanging on to wave principle?

If the opening is greater than one wavelength in size you will have a diffraction pattern, a beam pattern like a sin(x)/x function, and will have a main lobe and side lobes--and so will not have uniform illumination.

To get relatively uniform illumination you would need an opening less than 1/4 wavelength in size.

The opening acts like an aperture or antenna where the main lobe beam width is proportional to the wavelength divided by the aperture size.

No matter where you stand as an observer the front will be always the brightest and sides darker.

This is true but the effect can be made so small as to be not noticible by decreasing the size of the opening. For example, decrease the size by a factor of 3 in your simulation. Then you wall get nearly uniform illumination.

Not the answer you're looking for? Browse other questions tagged waves visible-light huygens-principle or ask your own question.