While reading papers on HEP, I often come across the following terms. Unfortunately, Google is not always helpful as it returns only papers related to the topic(s) and not something like a Wikipedia article that defines the terms.

The last term, for example, has been extensively used in this paper. Without understanding these terms, I am finding it difficult to read papers on this subject.

It will be quite helpful if someone defines these terms. Related papers can be cited, but please give a short summary of what the terms mean along with the citations.

betatron motion: A particle accelerator normally consists of a lattice with alternating focusing and defocusing quadrupole magnets. As your beam, composed of many particles with a transverse spread, traverses one of these quadrupole magnets, it will thus be focused or defocused, meaning that the size of the beam changes. This works just like any other optical system, where you instead have a beam of light.

The resulting modulation of your beam size is known as betatron motion, and the transverse RMS size of your beam is given by: $$\sigma(s) = \sqrt{\beta(s)\epsilon}$$

where $\sigma(s)$ is your beam size at position $s$ in the machine, $\beta(s)$ the betatron function (beta function in short) at position $s$, and $\epsilon$ the so called emittance which is a measure of how spread-out your particles are in phase space (x, px, y, py); it is equal to the area that your particles form in phase space. The emittance is normally given in units of meter times radian, whereas the betatron function is given in units of meter.

The focusing/defocusing lattice determines the beta function, and there is an inverse relationship between a particle's space and momentum variables, meaning that a strong focusing giving a small beam at one place simultaneously gives a large transverse momentum to the particles in the beam. The linear motion of the beam works just like a harmonic oscillator.

Since focusing is done by quadrupole magnets in the LHC (and in most other accelerators), one cannot simultaneously focus in both transverse directions at the same time. That is why you see the alternating behavior in the horizontal and vertical betatron motions. 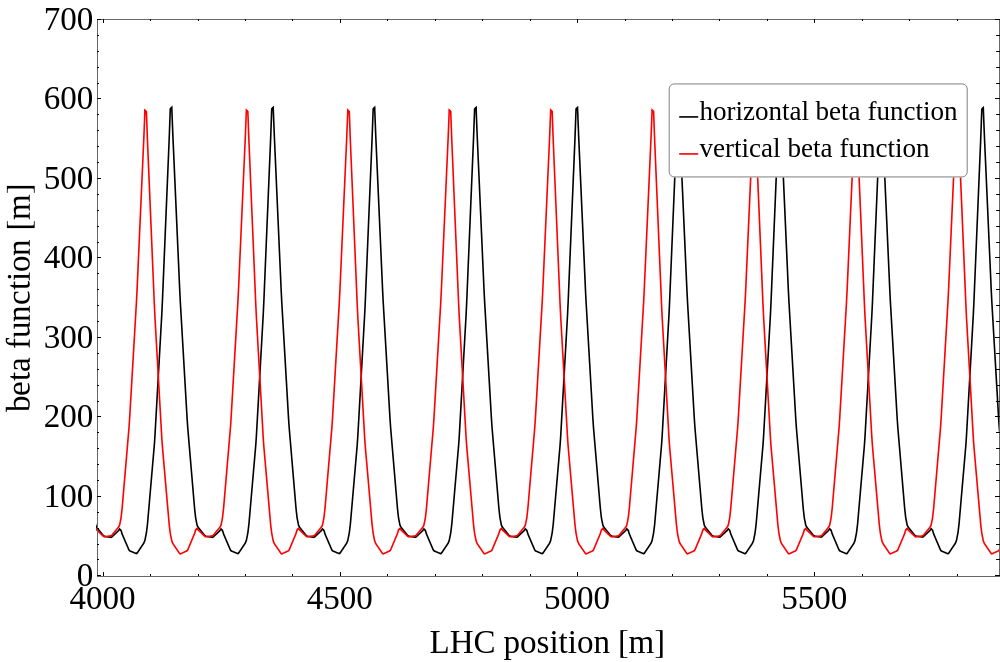 Now, what you were asking about was betatron coupling. This is when you have coupling in the betatron motion between the two transverse directions.

If you have a particle in a focusing quadrupole magnet that is with some offset from the center of the magnet in the x direction, then it is normally supposed to be focused (by a vertical magnetic field), such that it is bent back towards the center. Now, imagine that you rotate the quadrupole magnet 45 degrees around the beam axis. Your particle that is offset in the x direction will no longer see only a vertical component of the magnetic field, but also a horizontal component. This horizontal component will bend the particle in the vertical direction as well as the horizontal direction.

$\beta$-beat, is when you have errors in your beta functions throughout the machine, that is, your betatron motion is not according to the design. There are lots of sources of errors that can introduce beta beating, such as incorrect quadrupole strengths (notably 50 Hz oscillations due to the mains power). In general it is important to minimize beta beating, since the beta function controls how sensitive the beam is to most types of perturbations and kicks. In the current LHC, it is controlled down to less than 5 percent.

It is important to keep your horizontal and vertical tunes away from certain values, or you will build up a resonance that quickly destroys your beam such that is is lost into the machine aperture. The interger part is irrelevant, but the fractional part should be kept away from low-order rational numbers, notably 0, 1/2, 1/3, 1/4. You should also not have exactly the same tune for both the horizontal and vertical motion, since even in the best accelerator you still have some transverse betatron coupling.

Chromaticity refers to a dependence of the focusing gradients in the quadrupole magnets with the longitudinal momentum of your particles, just like optical rays of different energy see a different refractive index, and thus focal length, in optical lenses. How this couples to the transverse motion of the beam is referred to as chromatic coupling. Sextupole magnets are used to correct for this.

For further details, I refer you to any of the US Particle Accelerator School (USPAS) lecture series on accelerator physics, ranging from both introductory courses to advanced specific topics: https://uspas.fnal.gov/materials/18ODU/Fund/index.html

If you prefer an introductory text book, I personally like An Introduction to the Physics of Particle Accelerators, by Conte and MacKay,

Not the answer you're looking for? Browse other questions tagged particle-physics terminology accelerator-physics or ask your own question.