What allows a pull-back toy car to drive further than it was pushed?

Imagine you have a pull back toy car. Its back part is on $x_0$. You push it down and move it in the back direction to the point $y$ (not marked):

Then you leave the car to move away:

Then you mark the final position by $x_1$:

Let's say, that the distance you have pushed the car is $d_1$ and the distance the car has travelled is $d_2$.

As you can see, the car has travelled more than before (same as $d_1 < d_2$). If you don't believe it, try it yourself. Why has that happened? The law of conservation of the energy tells us, that energy can't be created out of anything.

If you put a stone in a catapult, pull it back $30\ \mathrm{cm}$ then release it, it goes forward much further than $30\ \mathrm{cm}$. If you did this in empty space the stone would keep going indefinitely.

Energy hasn't been created out of nothing. You have done work against the catapult, storing elastic energy. When you release the catapult the stored elastic energy is transformed into the kinetic energy of the stone, which is dissipated as heat and sound as the stone flies through the air and hits a target. If there is no air resistance or friction, and nothing impedes the stone, its kinetic energy remains constant forever – its speed doesn't change, it goes infinitely more than $30\ \mathrm{cm}$.

The toy car is the same. Instead of an elastic band, it contains a spring. Pushing down engages a gear wheel. As you push the toy car backwards you wind up the spring quickly using a relatively large force. You do work, elastic energy is stored in the spring. When the car is released, it springs back up and a different gear wheel is engaged. Now the spring unwinds itself slowly, supplying a much smaller force to the toy car. (See Note.) Elastic energy is transformed into the kinetic energy of the car, which is dissipated by friction. The car loses its kinetic energy gradually; it slows down and stops. If there was no friction the car would keep going indefinitely on a flat surface.

It is not the distances which you need to compare but the work done, which is force times distance. You give the car elastic potential energy by pushing with a large force over a short distance. The much smaller force of friction takes that energy away over a much longer distance after it has been transformed into kinetic energy.

The car goes $50$ times further forwards than you moved it backwards. But you haven't created any energy. In fact, some energy was lost pushing against friction. Only $1.50\ \mathrm{Nm}$ of the $1.53\ \mathrm{Nm}$ of energy which you supplied was used to move the car forward.

Note: When the spring is fully unwound it is disengaged from the wheels so that the car rolls forward freely instead of winding the spring back up. That's like the catapult which releases the stone; otherwise the stone would stretch the elastic again and keep oscillating until its kinetic energy was used up.

It works kind of like the sketch below. When you push down and backwards on the car, a high ratio gear meshes that winds the spring, so a few inches backward push turns the car wheels back a few turns and winds the spring several turns. When you release the car, the body lifts. This un-meshes the first gear and meshes a low ratio gear instead, so several unwinding turns of the spring results in many forwards turns of the wheels. Ignore the belt drive I have inserted between the gear usually both gears mesh with just one drive wheel - but that would have made my sketch messy and harder to understand. 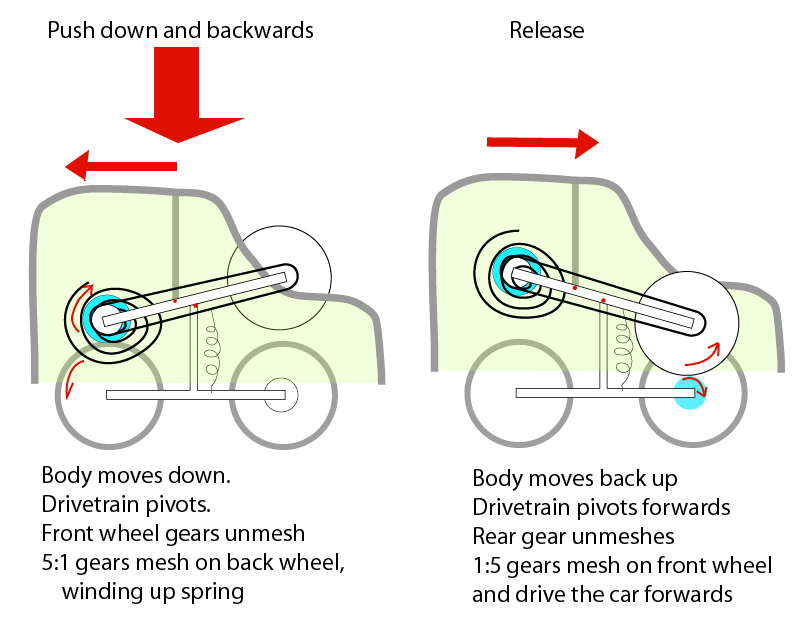 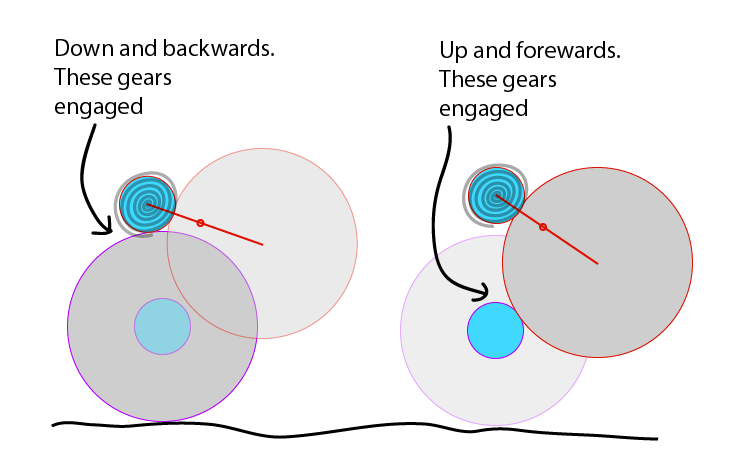 It's not a pendulum.

Imagine a pendulum hanging still at the center. That's like the toy car.

If you pull back the pendulum, that's like winding up the toy car. And if you release it, it'll launch forward, like the toy car.

The pendulum will go no further past the center than you pulled it back, because it's storing up gravitational potential energy as it goes along. The toy car, by contrast, isn't storing energy back up in a second spring to launch backwards in the opposite direction; it's just letting its kinetic energy carry it.

I think a few details are hidden in unclarity of the question. Very nice drawing skills indeed though!

I think the car you talk about, which goes forward when pulled back, does not use a flywheel, but actually uses a torsion spring. as shown in the link provided by Joshua Ronis in the comments.

The car you sketched moves along a horizontal surface. That means it does not gain any gravitational potential energy when it moves forward (translates). (It does lose a bit/all of its energy on: air-friction(mainly), rolling friction(mainly), creating noise(small), and I think temperature radiation (small).

So for example, if there was no friction anymore once the car has accelerated in forward direction, the car would just keep on travelling forward forever, (a bit like satellites in high orbits that appear to go on forever, since they experience very little friction (when all they needed was an initial push by a rocket when they get up there {in reality "getting up there and giving the initial push" is usually mingled for energy efficiency though}).

Therefore, the car can indeed travel beyond its initial point of push back. What that implies is that the friction forces it experiences are lower than the forces that are generated by the flywheel/torsion springs potential energy(over the distance up to the starting point). The forces that can be created by the flywheel/torsion springs (over the distance up to the starting point) must be lower than the forces you put on it with your hand when rolling it backwards (due to the conservation of energy and real-life {mechanical} energy translation losses).

The spring is what stores the energy that you transform from your mechanical energy by pushing back the car.

Now the flywheel needs to be very heavy, actually heavier then the car itself, thus, when you release the car, the spring transforms back the stored potential energy onto the flywheel, starting it to roll.

Now why does the flywheel roll more forward then backwards? It is because it does have inertia. When you push the car back, and load the energy into the spring, you do not use the flywheel (and its inertia) to move the car back at all, you just use your mechanical force.

When you release the car, the flywheel is actually rolling and its inertia is what drags the car forward until the flywheel loses this inertia caused by the slowdown because of friction on the axle (caused really by gravity).

Not the answer you're looking for? Browse other questions tagged newtonian-mechanics kinematics energy-conservation or ask your own question.

14
Where do electrons get their ever-lasting circulating energy?
1
Finding max height of a mass launched by a spring?
1
Nonsensical equation for slipping vs. tipping point on an incline?
1
Why does wave keep on travelling despite destructive interference?
1
Linearity in acceleration in kinematics (Intro to Physics)