Are the two interference patterns at the output of an interferometer quantum entangled?

Yes (see edit below though).

The two interference patterns are quantum entangled, meaning they are described by a single and common state vector.

If a single photon hits a beam-splitter, it can be either reflected to path $a$ or transmitted to path $b$: 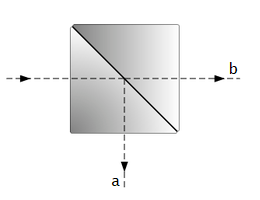 However, you cannot describe the two paths as (classically) independent and unrelated. The beam splitter has connected the two paths, it has entangled them, for what occurs on one of them (e.g. a measurement) also affects what occurs on the other one. No matter the distance, even if they are separated by light years.

Actually, reading your question more carefully, I think I have chosen a very niche example. In my case then yes, it's entanglement.

However, the general answer to

does not need quantum entanglement.
The opposite nature of the two patterns is because of the $\pi$ phase shift that light that is reflected receives wrt to the one that is transmitted.
All classical.

Not the answer you're looking for? Browse other questions tagged quantum-entanglement interference interferometry or ask your own question.

4
Are double-slit patterns really due to wave-like interference?
3
Interference experiment and entanglement with apparatus
1
Quantum Eraser Experiment says nothing?
3
Reconciling Understanding of Quantum Entanglement and Superposition
1
In the quantum eraser experiment, is it necessary to have two which-path-erasing detectors rather than one?
3
Evolution of the operators in Mach-Zehnder interferometer
1
How does interference occur in interferometers?
0
Why do quantum eraser and original double-slit setups produce different patterns on the detector?