How fat is Feynman’s photon?

According to my calculations, it is a lot skinnier than Airy’s photon, but still a whole lot fatter than a straight line.

So, how does a photon get from point A to Point B? The ray optics approximation treats a photon as an infinitely skinny straight line. Feynman, on the other hand, says a photon takes every possible path to get from Point A to point B, traversing the entire universe including all of space-time in the process. That’s very fat. However, Feynman also says the photon interferes with itself enough to wipe out almost all traces of its passing except for a very narrow tube surrounding that classical straight line. My question is, “How fat is that tube?”

Even though this is not a homework problem, I will show my first try. Considering only self interference, paths that differ from the shortest one by more than a half or quarter wavelength will be wiped out by interference. Those within say a tenth of a wavelength will mostly interfere constructively. So the tube will be an ellipsoid of paths from A to B that is defined by the length approximately equal to the distance from A to B plus one-fifth of a wavelength. (Replace “one-fifth” with any similar factor of your choosing, if you want to.) The width of this ellipse is the square root of twice its length (times that order one constructive interference factor), which is the distance from A to B expressed in photon wavelengths.

This makes for some fairly fat photons. For instance using visible light, approximately 2 10^6 wavelengths per meter, if A and B are a meter apart, the width is 1000 wavelengths or about a millimeter. For light from the moon, it is about 20 meters wide. From the nearest star, about 200 kilometers wide. From across the universe, about 10 million kilometers, or about 30 light seconds wide.

I have not yet found any references to this ellipse other than Feynman’s own brief reference to an ellipse in the Feynman Lectures on Physics Volume 1, chapter 26.

Is there any experimental evidence that would support or refute this calculation? Of course, there are other causes of beam spreading, including misalignment, diffraction and the uncertainty principle. At least diffraction and misalignment could dominate the Feynman broadening discussed above. (I am going to promote this experimental issue to a separate question.)

I think you have invented the zone plate, a kind of specialized flat circular diffraction grating that acts as a lens. It consists of a set of concentric transparent zones of decreasing widths. The width you have derived is the diameter of the first zone. Subsequent zones interfere constructively by allowing paths differing by integer multiples of the wavelength. 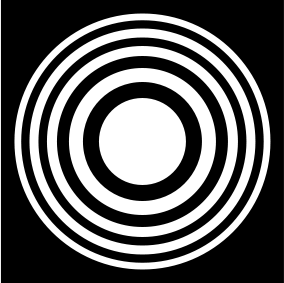 If you only include the central zone (Feynman's fat tube), you will get a messy diffraction pattern. You will get a perfect focus if you include all the zones. The answer to your question is therefore that the photon's envelope consists of all of these concentric shells, out to infinity. Whenever a photon is emitted from A and you want to know the amplitude for it to arrive at B, all of these paths contribute.

The radii are given by
$r_n = \sqrt{n \lambda f + \frac{n^2\lambda^2}{4}}$,
where $f$ is the distance from the center of the zone plate to the focus. (This formula is valid for parallel incoming waves, so would need to be modified for light expanding from a point.)

there are other causes of beam spreading, including ... diffraction and the uncertainty principle.

Diffraction, the sum over paths, and the uncertainty principle are all exactly the same physics.

Not the answer you're looking for? Browse other questions tagged quantum-mechanics visible-light photons feynman-diagrams diffraction or ask your own question.

1
How “wide” is a beam of light? What is its half-diameter?
10
Fresnel distance and Geometrical limit
1
Diffraction problem - How do I interpret
0
Diffraction angle - Bragg's Law
1
Diffraction according to Huygens principle - struggling with the concept of diffraction being caused by small point source wavelets
0
How does a Michelson interferometer work?