My physics book claims that if two identical disks moving at the same velocity travel up nearly identical hills, with the second hill not having friction, then the disk rolling up the first hill will travel to a greater height. Given that the disks started with the same kinetic energy while rolling at the base of the hill, shouldn't they reach the same height (i.e. same potential energy) as a result?

Given that the disks started with the same kinetic energy while rolling at the base of the hill, shouldn't they reach the same height (i.e. same potential energy) as a result?

First, let's assume that no slipping occurs on the hill with friction and that both disks are rolling without slipping before they get to their respective hills.

You are forgetting to consider that the disk on the frictionless incline will still be spinning when it gets to it's maximum height. Therefore, it will still have some of its initial kinetic energy that can't be converted into potential energy. This means it can't go as high as the disk on the hill with friction.

Thinking just about the forces, the static friction force points up the incline as the disk rolls up it, so this force counters the acceleration down the incline due to gravity which allows disk to go farther before it stops, as well as providing a torque that causes the disk to eventually stop rotating at the top of it's trajectory.

Given that the disks started with the same kinetic energy while rolling at the base of the hill, shouldn't they reach the same height (i.e. same potential energy) as a result?

The height that each disc reaches will depend upon how much of its total initial kinetic energy (rotational + translational) is converted to gravitational potential energy.

If I understand you correctly, both disks start out with some forward motion, and some rotation.

Disk 1 will slow down as it travels uphill, converting both kinetic energy from its forward motion and kinetic energy from its rotation into gravitational potential energy (height). When it reaches the top, it will have stopped moving, which means also no rotation. Its total energy remains constant in the whole situation, except this energy is now in the form of gravitational potential energy.

Disk 2 will slow down as it travels uphill, but only its forward motion will slow down. As it moves without friction, its rotation is unaffected. It can't convert its rotational energy (a form of kinetic energy) into gravitational potential energy/height. When it reaches its top, it will have stopped moving forward, but will still be merrily rotating. At that point, its total energy is still equal of that of disk 1, only its total energy is distributed, between gravitational potential energy, and (kinetic) rotation-energy.

Without friction, the second disk will roll, but not against the hill, thus it will lose kinetic energy exclusively in the form of translation - it's rotational kinetic energy will remain the same throughout the climbing, since the disk does not interact with the frictionless hill other than by normal force.

The first disk will interact with the hill as it rotates, so we must check the equilibrium with normal force and friction: 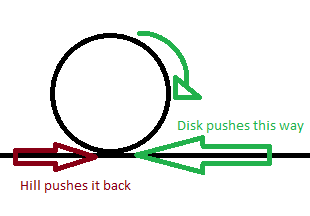 The hill, which we can safely assume to have a lot more mass than the disk, will apply a reaction force in the point of contact between the disk and itself, we know the normal force must be in equilibrium, otherwise the disk would be pushed out of the hill during it's motion. By also pushing the disk's contact point against the direction it is trying to roll, the hill causes that point's velocity to be zero (by force equilibrium).

Meanwhile, all the other points of the disk are still rotating, and converting the total kinetic energy into gravitational potential energy.

Note - the second disk DOES NOT convert it's rotational energy into gravitational potential energy, so considering both of them enter the hill with the same kinetic energy, the sum:

is their total energy, which is converted fully into gravitational potential energy in the first disk, but not in the second.

For the second disk, only Translational K.E is fully converted, the disk will mantain it's rolling motion as it climbs, but for all intents and purposes, it behaves like a block with:

which converts that value into it's gravitational potential energy.

By comparing the results,

Where Grav. Pot. Energy = mass* (small G) * height (assuming both of the heights taken from the same referential)

It's safe to say that Rotational K.E is positive, so Disk 1 converts more kinetic energy into Grav. Pot. Energy, and thus, reaches a higher height.

Cars can drive up hills. Their tires' rotation combines with friction to move forward.

When the friction's removed, e.g. due to the road being icy, the tires' rotation doesn't have the same effect.

That said, the textbook's a bit off: friction means that the disc's rotation matters, but this doesn't necessarily mean that it goes further as it could instead go shorter if it's rotating like a car's tire when driving in reverse.

I'd speculate that the textbook meant to compare a disc moving with perfect slippage vs. perfect traction, because if there's perfect traction, that'd imply that the disc is rotating like a car's tire driving in that direction. However, merely saying that there's friction isn't the same thing.

Not the answer you're looking for? Browse other questions tagged newtonian-mechanics rotational-dynamics energy-conservation friction rotational-kinematics or ask your own question.

2
Ball rolling on half-pipe
2
Two identical disks pulled differently question (Kinetic Energy)
0
Conservation of Energy with Rotation Caused by Friction
2
Rolling Without Slipping and Rotational Energy
3
Why do the expressions for an object rolling down an incline not depend on the coefficient of static friction?
0
Rolling race where objects roll with slipping
2
Why is kinetic energy of all circular objects rolling down the inclined plane of same mass is same?