Where does the energy produced by fusion come from?

Fission, in layman's (or "initiate's") terms, is easy enough to understand; a large atom with a lot of protons and neutrons requires a large amount of force provided by the strong interaction to overcome electromagnetism and keep the nucleus together. The necessary energies were imparted to the atom during its formation, which we can replicate to some degree within a nuclear reactor; a combination of heat and fast-moving free protons/neutrons recaptured by the atoms of the fuel turns uranium into plutonium, even as the actual atom-splitting produces much lighter krypton and barium isotopes (or a host of other possibilities, some more likely than others, as with many other types of reactions). That atom-splitting, by the way, reduces the size of the resulting nuclei, and therefore reduces the amount of strong interaction force required to contain them; the leftover energy is released as a high-frequency gamma photon.

Fusion, however, is an odder beast. A fusion reaction requires a large amount of starting energy; enough to strip the electrons off of the deuterium/tritium nuclei and form plasma. That heat is also enough to accelerate the particles fast enough that when they collide, the initial electromagnetic repulsion is overcome and the strong interaction binds them together.

Now, that's a lot of energy required; the Sun's inner core where most of the fusion occurs is estimated to be about 15 million Kelvin. The reaction, however, doesn't seem to release any energy, based at least on this simplistic explanation. Now, obviously that's wrong; pretty much all the energy we have available to us right now is, however indirectly, a result of the Sun bathing us in the energy from nuclear fusion. The rest of it, such as from nuclear fission, is also star-based, via creation of superheavy elements in stellar nucleogenesis.

But where is the source of this energy on the subatomic level? Surely more strong force is required to contain a helium atom than a hydrogen one, because the helium now actually has two protons and must actually overcome the Coulomb force (as opposed to hydrogen, which only has one proton and so the Coulomb force between the proton and its zero-charge neutrons is lesser). So, what imbalance does fusion induce within the nucleus that is then resolved with the release of a photon?

Why does the fused particle have less mass than the sum of the original two? See ChrisWhite's post above.

Disclaimer: this is a vastly simplified explanation; for more details see here.

There are other interactions to consider besides the Coulomb interaction. A very nice model of the nucleus is the liquid drop model, in which one models it as a constant-density liquid with various interparticle interactions. The result is known as the semi-empirical mass formula, which I summarize here.

While this formula does have its limitations (after all, it neglects all sorts of messy quantum-ness), it is still rather illustrative and it works remarkably well. For simplicity, let's neglect the pairing term. Also, let's take $Z = N = A/2$, which is pretty good for the most stable light elements, which is what you are most interested in. One particular fit cited in that article gives $a_\text{V} = 15.8~\mathrm{MeV}$, $a_\text{S} = 18.3~\mathrm{MeV}$, and $a_\text{C} = 0.714~\mathrm{MeV}$. With these numbers we can plot the energy as a function of $A$. However, you have to be careful to plot the energy per nucleon, which I'll denote $\epsilon = E_\text{B}/A$. This is useful because the number of nucleons is conserved in all fission/fusion reactions. The result is below. 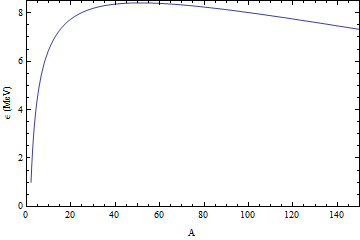 As you can see, fusing light elements makes for tighter bound products. This is because of those other terms. You can think of it as intermediate-mass elements striking a balance between long-range Coulomb repulsion and strong force nearest-neighbor attraction. Nucleons like to have neighbors on all sides but not to have too many neighbors off in the distance. 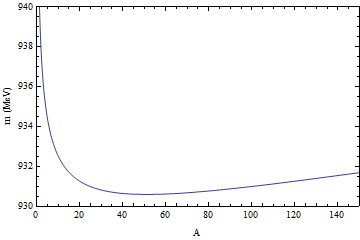 If we allowed the proton-neutron ratio to vary, this would give a slightly different answer to which nucleus is most stable. Indeed, direct measurements tell us Ni-62 has the greatest binding energy per nucleon, while Fe-56 has the lowest mass per nucleon.

The nuclei of atoms are quantum systems, and as such, the nucleons have certain energy levels associated with them inside the nucleus. This is best understood with the nuclear shell model. If the repulsion due to the electromagnetic force can be overcome, the nucleons of two colliding atoms will attempt to configure themselves into the most stable low energy state that is possible.

The nuclear shell model is not perfect, this is one of the reasons that caused nuclear physicists to look for better models of nucleons themselves. Experimental evidence shows that the quark model is the most accurate model of the nucleons to date.

Based on the quark model, it has been determined that nearly 99% of the mass of nucleons like the proton is due to the kinetic energy of quarks and the associated gluon fields.

So when atoms fuse and energy is given up, its principle source is kinetic energy of quarks and energy from the gluon field for the associated atoms.

When fusion occurs in the sun, its due to quantum tunneling causing hydrogen atoms to bind, forming helium. Energy is released because two hydrogen atoms have more energy then one helium atom, and when they bind the excess is released into space. The energy itself comes from some of the mass deteriorating into photons.

Not the answer you're looking for? Browse other questions tagged fusion or ask your own question.

10
What is the theoretical efficiency of fusion?
2
Energy needed to overcome the coulomb barrier
111
Why do fusion and fission both release energy?
1
If binding energy (from mass defect) is essentially the strong nuclear force maintaining the nucleus, why is it released?
0
Why does fusion above nickel 56 require energy?
0
Does fusion only occur with ions?
3
How does binding energy work?
2
Energy in nuclear fusion - mass change vs potential energy explanation
0
Fusion energy origin