In turbulence, the enstrophy of a flow in a domain $\mathcal{D} \subset \mathbb{R}^{D}$

appears sometimes, it's cool and has cute properties in 2d (see this answer about turbulent flows), etc.

Now, what does it represent physically? Okay, it's the integral of the vorticity squared, but has it a physically understandable interpretation? Why is it interesting to study that?

Here's a relevant quote from David C. Wilcox's Turbulence Modeling for CFD. This is discussing the interpretation of $\omega_t$, which here is the specific turbulent dissipation rate*. (also, $k_t$ is the turbulent kinetic energy*)

In subsequent development efforts, the interpretation of $\omega$ has behaved a bit like the turbulent fluctuations it is intended to describe. Saffman (1970) ... stated further, "The rough idea is that $\omega_t^2$ is the mean square vorticity of the 'energy containing eddies' and [$k$] is the kinetic energy of the motions induced by this vorticity." Spalding [Launder and Spalding (1972)] and Wilcox and Alber (1972) identify $\omega_t$ as the RMS fluctuating vorticity, which is also known as enstrophy.

So in essence, enstrophy is believed to be directly related to the energy cascade of turbulence. "Believed" is the key word there, as there are several different interpretations of $\omega_t$. One of those interpretations is

*Note that I've added the subscript $t$ (for turbulence) to differentiate vorticity/wavenumber from specific turbulence dissipation rate/turbulent kinetic energy. This is not the normal symbol used, but is done to reduce confusion and tons of "this variable actually means this in this context" statements.

I wasn't 100% satisfied with my original answer (still trying to find copies of the Wilcox & Alber (1972) and Launder & Spalding (1972) papers to confirm/investigate the entrophy -> $\omega_t$ relationship), so I kept digging. Here's what I found, along with commentary based on my previous knowledge:

From Applied Analysis of the Navier-Stokes Equations by Doering & Gibbon (textbook cited by Wikipedia):

The vortex stretching mechanism does not increase or decrease the total angular velocity: That is, global conservation of angular momentum leads to conservation of the integrated vorticity, but it can lead to local intensification of the vorticity amplitude.... Enstrophy may be amplified or diminished by the vortex stretching term $\omega \cdot \nabla \mathbf{u}$ in 3d. [p. 11,12]

This was previously mentioned in a few answers, but they (incorrectly?) said enstrophy was conserved in the Navier-Stokes equations. Also note that this does not specify that the $\omega$ is the fluctuating , instantaneous, or average component of vorticity. If the "moments" it refers to is statistical moments, then $\omega$ would have to be the fluctuating component, but the language used does not seem to suggest that.

For an incompressible fluid with no-slip, stress-free or periodic boundary conditions, the viscous energy dissipation rate is proportional to the enstrophy.... the energy equation highlight[s] the important role of the mean square vorticity: The rate of energy dissipation by viscosity is directly proportional to the enstrophy in the absence of moving boundaries. [p.17]

This relationship is significant, as this links enstrophy to a key part of turbulence, which is the viscous dissipation at smaller scales. Note that this applies specifically to instantaneous values (energy and entrophy). I assume that this can also be applied to the fluctuating values. That would mean also that turbulent energy dissipation by viscosity is also directly related to the fluctuating enstrophy. This last part would align with the statement made by Wilcox before: "identify $\omega_t$ as the RMS fluctuating vorticity, which is also known as enstrophy"

Wavenumber Space Representation: Later in the text, Doering & Gibbon go into the enstrophy and energy in wavenumber space (starts at 52, but if you're not already familiar with turbulence and wavenumber space, I'd suggest going through the whole chapter. Not that long, not too dense). tl;dr on wavenumber space is higher wavenumber = smaller length scale and vice versa.

To summarize that section, energy distribution in wavenumber space takes on the "classic" turbulence cascade, with the Kolmogorov-Obukhov 5/3 law showing off beautifully: 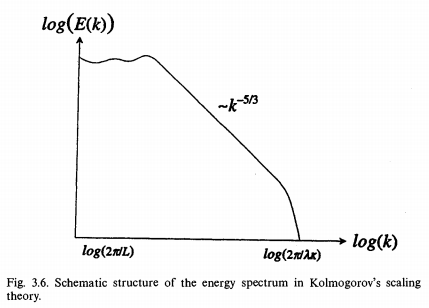 There also exists enstrophy distribution in wavenumber space, where dissipation takes on larger values as the wavenumber increases (ie. at smaller length scales). This corresponds to the decrease in energy found in the $E(k)$. 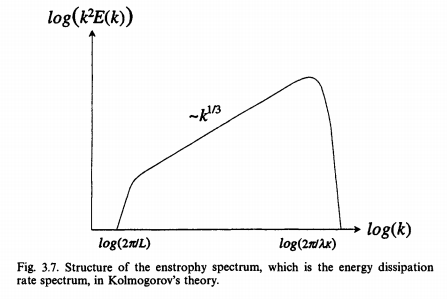 As you an see, Doering & Gibbon give enstrophy in wavenumber space as $E(k)k^2$. They don't give any derivation or explanation behind it. I have only a few ideas of how it is true, but they're not very concrete (lots of "hey, this term looks like this term").

where $\nu$ is kinematic viscosity, $L$ is some large characteristic length scale (for pipe, diameter could be used), and $E(k)k^2$ is enstrophy as defined before. This, again, aligns with Wilcox's (and the rest) identifying the connection between enstrophy and turbulent dissipation.

From mathematics point of view, it is a surface integral of the scalar quantity |Curl v $|^2$. The physical meaning of it, in the context of fluid dynamics in 2-D or 3-D, is that it has the units $(m/s)^2$ which when multiplied by the density of a fluid represents some form of energy. As for the meaning of the intgral in a D-dimentional space, the problem is more of mathematics than physics. For a physical interpretation of this integral in D-dimensions, one needs to know first what the Curl v itself could represent, in a similar context to that of fluid flow in D-dimensional space, and then wonder what the physical meaning of its intgral on D-dimensional surface could mean. Its dimensionality, $(m/s)^D$, does not seem to relate to something physically meaningful for arbitrary values of D. I am not aware of a good physical analogy of this in D dimensions.

As for the the word itself, it derives from the Greek $\epsilon \nu - \sigma \tau\rho o\phi\eta$. It means: "during the rotation",in a state of rotation or "while turning". In other words, the word makes reference to turning, rotation. I hope this helps you visualise the meaning of the word in relation to the turbulant motion of a fluid.

Similar to the way Entropy is derived: $E\nu\tau\rho o\pi\eta$ which means: in a state of change, during a change.

The Wikipedia article you have sited states a simple but clear interpretation of this quantity and some basic use:

"The enstrophy can be interpreted as another type of potential density (ie. see probability density); or, more concretely, the quantity directly related to the kinetic energy in the flow model that corresponds to dissipation effects in the fluid. It is particularly useful in the study of turbulent flows, and is often identified in the study of thrusters as well as the field of flame theory."

This seems to answer your basic queries. However, I understand from the previous answer that you want a bit more information on this quantity and its use. Well...

I don't believe I can define enstrophy any more clearly that you have yourself (and Wikipedia does) already, however, let’s try, I can then give you some idea of its use. Local anisotropic behaviour of enstrophy can be treated as the self-organization of the regions of high vorticity in coherent vortex structures – most notably vortex filaments/tubes. This turbulent behaviour is ubiquitous and still not very well understood. In particular, local alignment or anti-alignment of the vorticity direction, i.e. local coherence, is prominently featured in turbulent flows.

It is thought, but still an area of active research, that evolution of voticity in turbulent flows leads/is governed by 3D enstrophy cascades on 'large-scales' of the turbulence. I am no expert in this area but have read a few papers on this when writing a 2D code for turbulence modelling.

Not the answer you're looking for? Browse other questions tagged fluid-dynamics turbulence or ask your own question.

45
Have we figured out how to analyze turbulent fluids?
1
What is enstrophy and how to understand it in higher dimensions?

5
In turbulence theory, what happens if i take space average of fluctuating part?
7
What's the corresponding symmetry of enstrophy conservation?
0
Enstrophy and energy spectral density of vorticity
2
"Where" does dissipated enstrophy go?
1
What are premultiplied energy spectra?
1
What is enstrophy and how to understand it in higher dimensions?
0
Energy dissipation for force-free, incompressible Navier-Stokes equation with tangent boundary conditions on bounded domains
0
What makes the mixing of two fluids turbulent?