What is the difference between the Ricci tensor and the scalar curvature?

What is the difference of physics meaning (for beginner) between the Ricci tensor $R_{\mu\nu}$ and the scalar curvature $R$ terms ?

Wikipedia gives the same explanation for the two, as we could see below, so it does not help to understand the difference between the two:

In differential geometry, the Ricci curvature tensor, named after Gregorio Ricci-Curbastro, represents the amount by which the volume of a narrow conical piece of a small geodesic ball in a curved Riemannian manifold deviates from that of the standard ball in Euclidean space

Specifically, the scalar curvature represents the amount by which the volume of a small geodesic ball in a Riemannian manifold deviates from that of the standard ball in Euclidean space

That said, this is not the usual definition, and I don't think they are correct. Curvature would have to depend on the second derivative in the deviation from Euclidean space as the size of the ball goes to zero.

For an intuitive idea I characterise it in this diagram 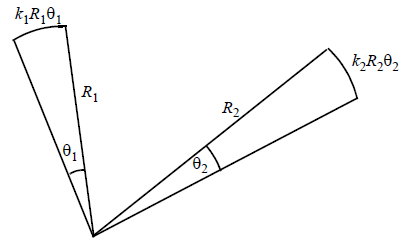 The factor $k_i$ in arc length can be regarded as the deviation from Euclidean space. In a small enough region, the space becomes close Euclidean ($k_i \approx 1$). Curvature corresponds to the second derivative of $k_i$ as radius $R_i$ goes to zero. For a two dimensional space, two directions and magnitudes are necessary. In four dimensional spacetime four are needed, meaning a rank-4 tensor, Riemann. Contract with two indices and that gives you Ricci, and contract the remaining two indices to get scalar curvature.

Not the answer you're looking for? Browse other questions tagged general-relativity differential-geometry tensor-calculus curvature or ask your own question.

7
What does Ricci tensor do with two vectors?
0
The Ricci tensor and its relation to volume
7
Ricci scalar and General Relativity cartoon pictures
7
Interpretation of the Weyl tensor
1
Ricci Scalar as Curvature
6
Is there are relationship between the Ricci scalar and the determinant?