Does our failure to detect neutrinoless double beta decay spell trouble for the seesaw mechanism?

The seesaw mechanism is a theoretical model of neutrino masses that has the side benefit of (arguably) naturally explaining why neutrinos are so much lighter than the other massive Standard Model particles. It involves adding heavy "sterile neutrinos" with Majorana masses on the order of the GUT scale. The seesaw mechanism predicts that (for one lepton generation) the geometric mean of the light and heavy neutrino masses should "naturally" be on the order of the other Standard Model particle masses (the story is similar for multiple lepton generations). This prediction seems to be experimentally plausible based on the estimates of the (light) neutrino masses that come from neutrino oscillations and other observations.

The seesaw mechanism also predicts the violation of conservation of total lepton number. The clearest experimental signature of this violation is believed to be the process of neutrinoless double beta decay. Many experiments have tried to detect NDBD, but so far none have succeeded (to the physics community's standards of quality and reproducibility).

I'm curious how these two values compare. Which of these statements is the best summary of the current situation?

B. The seesaw mechanism predicts NDBD rates that are much lower than the current and foreseeable experimental capabilities to detect. We won't be able to confirm or reject the "natural" seesaw mechanism for many years, if ever.

C. The seesaw mechanism predicts NDBD rates that are at or only slightly below our current experimental capabilities to detect. We could plausibly detect it in the near future. (It should be noted that research physicists have a personal incentive to exaggerate the likelihood of this scenario.)

D. The "natural" seesaw mechanism has so many unknowns and so much wiggle room that it can't even nail down the NDBD rate to within a few orders of magnitude. The theory therefore doesn't have much explanatory power, and can at best only give retrodictive explanations rather than predictions.

The answer is D, but not because of anyone's malice -- it's just the hand nature has dealt us.

The neutrinoless double beta decay rate is proportional to $|m_{\beta\beta}|^2$, where $m_{\beta\beta}$ is the "effective Majorana mass", which in turn depends on the elements of the PMNS matrix. Here's a plot of $|m_{\beta\beta}|$ as a function of the mass of the lightest neutrino, from a recent review. 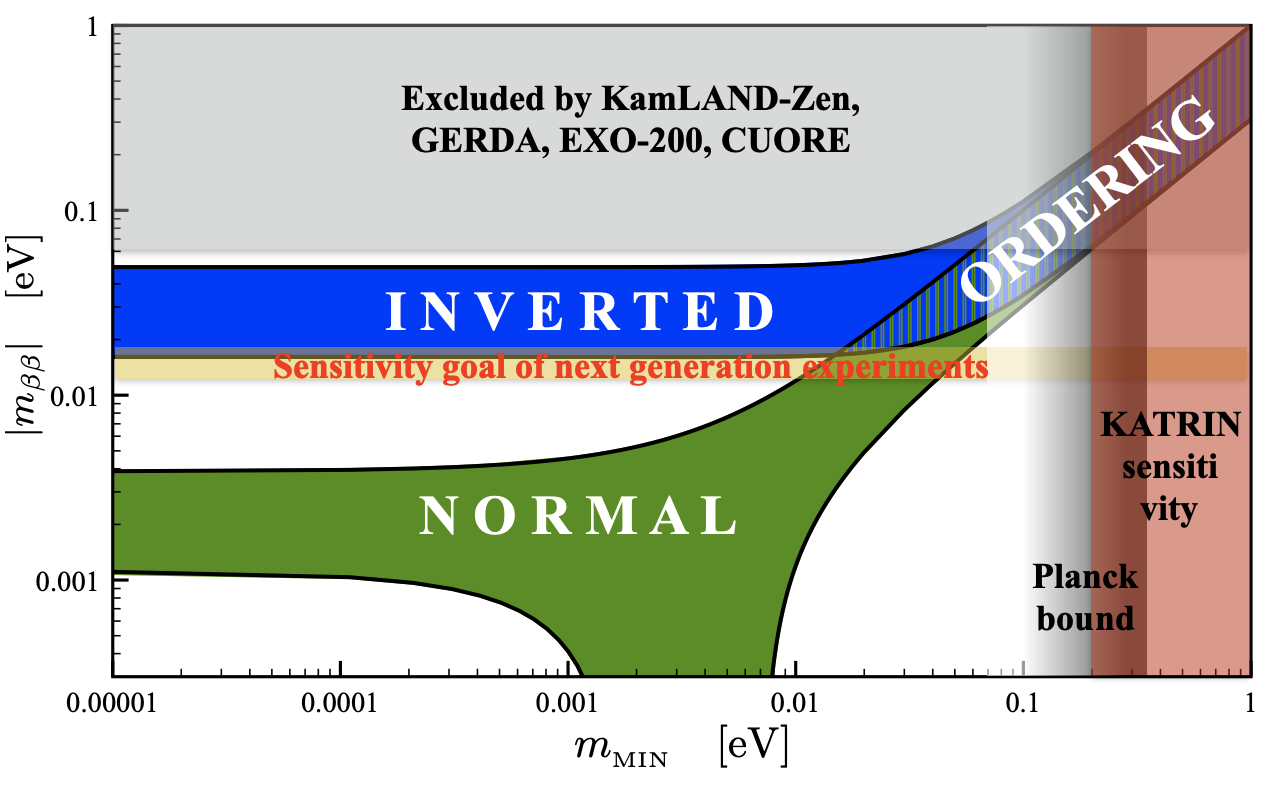 There are a couple points to make about this plot.

Not the answer you're looking for? Browse other questions tagged quantum-field-theory radiation neutrinos beyond-the-standard-model fine-tuning or ask your own question.

3
A terminology question: What are active neutrinos and why?
4
Flavour symmetries of neutrino and charged lepton mass matrices
4
How are the sterile neutrinos $\nu_s$ different from the heavy right-handed fields $N_R$ (or $\nu_R$)?
5
Why is the notion of neutrinos as possiblly Majorana fermions still promoted given the observation of neutrino oscillations?
1
What mechanism will generate Dirac neutrinos?
17
Why do people say that neutrinos are either Dirac or Majorana fermions?
2
What causes neutrinos to be weakly coupled?
2
Is neutrino mass really physics "beyond the Standard Model"?