Does light travel "quantised"? Or , is it perceived as quantised only when it interacts ,i.e, undergoes measurement?

Now I have this setup: 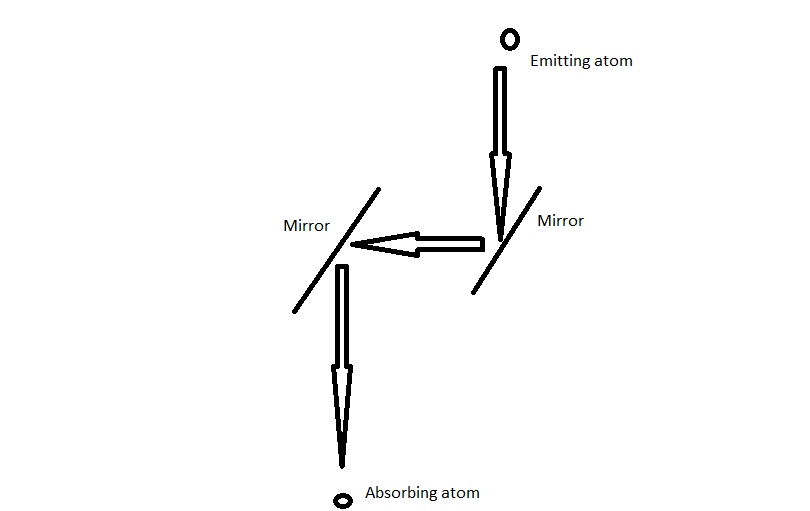 In this setup, the emission and absorption should be separated by a spacetime distance of 0, thus based on the description, the momentum between the emitting and absorbing atom (object) should be transferred directly.

But, the mirrors in between receive something called radiation pressure, that is, the light puts pressure on both mirrors in the way.

Radiation pressure is the pressure exerted upon any surface due to the exchange of momentum between the object and the electromagnetic field.

To clarify, by directly, I mean that the light (photons) transfer causality between the emitter and absorber, and they do it without any change in its (the lights'/photons') momentum in between.

A spacetime diagram might help here. Light travels along a null geodesic while uninterrupted, so the spacetime interval is zero for a $45^{\circ}$ line on the diagram. Reflections are a different matter though, as there is an associated change of inertial frame. Compare with the twin paradox, where one twin travels at a uniform velocity to a different planet, $turns$, and returns back. There is a resetting of clocks and inertial frames associated with turning. 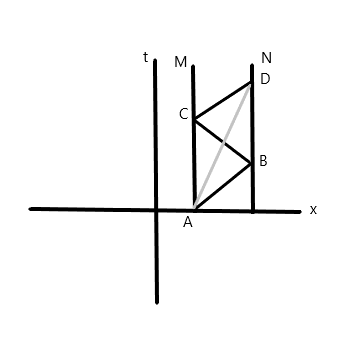 In the diagram, the vertical lines M ans N are stationary mirrors, the lines at $45^{\circ}$ is the worldline of the photon. Notice that the gray line is at a higher elevation, meaning that it doesn't travel at the speed of light. This line measures the spacetime interval between events A and D, which here represent emission and detection respectively. The interval is timelike, not null, as you can see.

Momentum of photons changes upon reflection as a result of the change in direction of the photon. The statement that the spacetime interval is null consequently does not hold here.

The crux of your question lies in these two paragraphs:

In this setup, the emission and absorption should be separated by a spacetime distance of 0, thus based on the description, the momentum between the emitting and absorbing atom (object) should be transferred directly.

To clarify, by directly, I mean that the light (photons) transfer causality between the emitter and absorber, and they do it without any change in their (the lights'/photons') momentum inbetween.

"Directly" is not a technical term. Neither is "transfer causality". And the use of the possessive pronoun "their" is ill-defined in your particular scenario.

If "the two events have a spacetime distance of 0" is your definition of "directly" here, then this is of course trivially true.

But the common language meaning of "directly" would be hard-pressed to apply to such situations, e.g. the event of the emission of a photon from the surface of a star in Andromeda and its absorption in a human eye on earth also have a spacetime distance of zero, yet most people wouldn't say that photon transferred the momentum from the star to the eye "directly" - it travelled across millions of light-years in between!

Regardless of the red herring of spacetime intervals, there's an even bigger problem in the formulation of the question - the idea that "the photon" exists and can be tracked across "its" journey between the mirrors. As you well know, mirrors can be thought of to work by absorbing the incident photon and emitting a photon with the new direction. In any case, even without any knowledge about what goes on inside the mirror, what we see from the outside is "a photon goes in, a photon comes out".

Elementary particles are very private creatures, trying to reason about them by tagging them with identities is rarely meaningful or useful.

(can a null geodesic include a mirror reflection)?

No, a null geodesic cannot include a reflection. The term “null geodesic” has two parts: “null” and “geodesic”.

So although the path is null it is not a geodesic, and it is therefore not a null geodesic

the mirrors inbetween receive something called radiation pressure, that is, the light (photons) puts pressure on both mirrors

When the null path deviates from a geodesic path the tangent vector changes. This means that there is a change in momentum which is precisely the radiation pressure mentioned.

It is without any doubt, that light can accelerate a body. Examples are the sun and a solar sail in free space, the redshifted light from a mirror (with the momentum transfer from the photins to the mirror) or the acceleration of an electron in space with the light of a laser.

In all cases the photon gets absorbed. The reemitted photons are of a longer wavelength / are with less energy. Generally this is the answer to your question. Any emission has the effect of negative acceleration for the emitting particle and the transfer of this momentum to the absorbing particle.

The case with the mirrors has to take in consideration, that an ideal mirror doesn’t exist. Under any circumstances an incoming photon - be it as weak as only possible - interacts with the subatomic particles of the mirror and the excited electron dissipate the received energy to the other particles of the mirror. So the reemitted photons in any case are of a longer wavelength. An energy loss happens on every mirror. BTW this is the reason for the thermodynamic law of no existence of a perpetuum mobile.

Reflection is an interaction of light with matter which is a process of quantum mechanics. So, even if one considers the total spacetime interval in your setup as equivalent to zero, this is no direct transmission of photons in vacuum.

Also, from a practical point of view, a mirror usually is supposed to consist of mass particles. That means that there is no propagation of photons in vacuum.

Not the answer you're looking for? Browse other questions tagged quantum-mechanics electromagnetism special-relativity electromagnetic-radiation reflection or ask your own question.

69
What do spacelike, timelike and lightlike spacetime interval really mean?
26
Explain reflection laws at the atomic level
7
What happens at the QM level with a photon hitting a mirror?
1
Does light travel “quantised”? Or , is it perceived as quantised only when it interacts ,i.e, undergoes measurement?
0
Can emission and absorption be separated lightlike, spacelike, timelike?