Is there a energy lower to -13.6 eV in a given atom/element?

I recommend reviewing either the Bohr or Schrodinger models for a hydrogen-like atom that has a nucleus that has $Z$ protons.

The integrals in semiconductor physics usually have a factor of density of states $\rho(E)$ which goes to zero outside certain energy limits. So you can integrate to infinity, but the density of states will only be non-zero for certain ranges.

Mathematically then, if you want to integrate a function $f(E)$, you are replacing a sum over energy states by an integral times the density of states.

You can see the density of states below from this link. For silicon the relevant bands span about 20 eV. 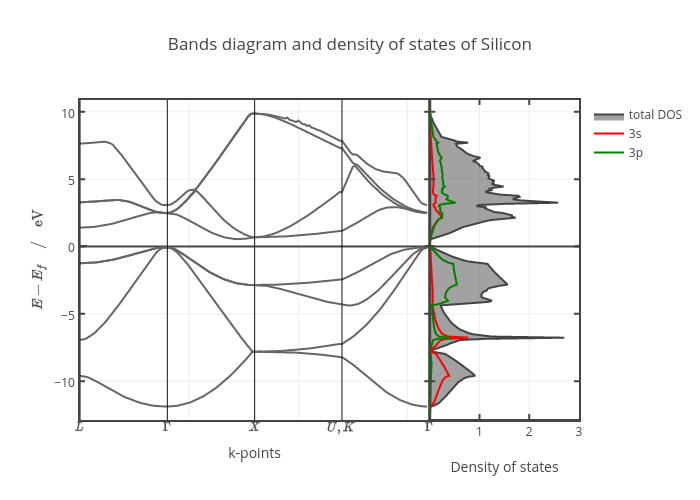 Not the answer you're looking for? Browse other questions tagged condensed-matter solid-state-physics semiconductor-physics or ask your own question.

14
Are orbitals observable physical quantities in a many-electron setting?

2
Determining if a semiconductor is n-type, p-type or intrinsic
2
Silicon atom: How is it replaced by a Phosphorous (or Boron) atom?
2
Schottky Barrier - Why energy band levels at interface are assumed to remain the same that bulk
2
Why is there an energy gap in superconductors?
0
Schottky Barriers: Is it possible for the fermi energy level of a metal to be lower than the valence band maximum of a semiconductor?
0
How to determine the activation energy for donors/acceptors using the Arrhenius eq.?
1
Fermi level and chemical potential in doped and pure semiconductors
0
Analogy of a hydrogen atom in an $n$-type semiconductor
0
Where are the allowed states in the conduction band for a single atom?
2
Does the shifting of the Fermi energy level of an intrinsic semiconductor mean that $n \neq p$?