Is the following thought experiment - to determine the maximum limit for power $P_m$ in General Relativity - correct?

It is by Craig J Hogan, a member of the team that discovered dark energy, so pretty mainstream I would think.

Consider an (almost) Kugelblitz sphere of radius $R$ $\geqslant$$2Gp \over c^3$ filled with photons with a total mass-energy of $E=pc$ that leave after a time $t=R/c$. Average power (luminosity) $P=E/t$. Therefore:

There is a discussion of this in Misner, Thorne, and Wheeler, p. 980. Their treatment is more careful than Hogan's and more clear about the underlying assumptions. They derive this estimate by considering violent processes of astrophysical collapse in which the virial theorem is valid. They don't claim that it's an upper limit on the luminosity of any object.

Hogan's discussion seems to have a lot of logical problems. He starts by assuming a sphere "filled with light...and released [in] an instant." This is a very specific system, so there is no logical reason to conclude, as he does, that therefore, "An absolute luminosity limit for anything is imposed by General Relativity."

That would be pretty illogical, since, for example, if you had two such sources side by side, they would release twice the power, and you could consider them as one big object. I suppose MTW evade this counterexample because the two objects would not be equilibrated with one another, and therefore the virial theorem wouldn't apply to them if they were considered as a single system. I think this is also the answer to mmeent's counterexample of a thin shell of energy being released. It is indeed a counterexample to Hogan's claim, but not to MTW's, since the thin shell probably doesn't obey the virial theorem.

It's also weird and unfortunate that Hogan wants to connect this to the Planck mass. This would suggest, incorrectly, that there is something quantum-mechanical about this, when in fact (as he admits) there isn't. As he explains, the h-bars go away when you form units of power in Planck units.

OK, its been a while, with no other comments or answers, so I will answer.

A: Yes. The existence of black hole horizons implies a maximum power limit in General Relativity, leading to related conjectures first posed around the time of Hogan’s 1999 paper. 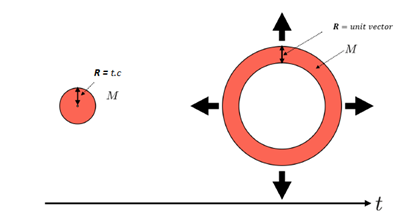 Figure 1 Outgoing shell of radiation and its past appearance

Consider a process (Figure 1, Cardoso et al 2018) with a finite time $t$ which produced radiation with a total mass-energy of $E=Mc^2$ contained in a shell of thickness $R=c.t=1$. Evolve this system into the past until $R=shell radius$. For the radiation to have escaped its initial self-gravity a BH horizon cannot have been present for the ‘particle’, so:

With natural units, we could assign $R$ as unit (Planck) length, $t$ is a unit (Planck) time so then $E=1/2=pc=Mc^2$ half a Planck mass-energy. The products (not the individual values), of these quantities are therefore minimum bounds in GR and quantum gravity, i.e. the uncertainty principle.

So $MR=1/2$ where $R=ℏ/2Mc=1$ being the reduced Compton radius of the ‘particle’. This was noted by Carter(1968), his Kerr-Newman solution for a charged and rotating black hole with a gyromagnetic ratio of 2 like the Dirac electron. That is, (2) also holds if the shell was charged and rotating.

Maximum power supports the conjecture of maximum force (Gibbons) in GR, and therefore, maximum acceleration and temperature. (2) is twice the limit $F_g$ proposed by Gibbons, but of course, the local proper acceleration limit at $R$ is half $a_P$, which will also be the Hagedorn temperature in natural units, as noted by Lawrence B. Crowell.

To see this, consider the inverse square law and Figure 1. Gravitational intensity to a distant observer $I=GM/R^2 =g=1/2$ at the limit radius $R=1$. $g$ is acceleration, i.e. maximum gravitational field is $κ=1/4M= 1/2=g$. Then, from Unruh and Bekenstein:

From (4) and (5) we can derive another limit, as per Padmanabhan

Not the answer you're looking for? Browse other questions tagged general-relativity forces black-holes or ask your own question.

27
Is there a maximum possible acceleration?
8
Can one body push another body away by sending gravitational waves towards it?
0
What conceivable connection is there between the cosmological constant and radius of the Universe?