Is there an analogy for Wilson loops/lines in statistical mechanics?

When reformulated in Euclidean space, quantum field theory bears some strong resemblance to statistical mechanics: for example a scalar field $\phi$ can be seen as a spin $s$ in Landau theory, and the source $J$ in path integral formalism can be seen as an external magnetic field. What about Wilson loops/lines?

In Peskin & Schroeder, the Wilson line is defined as:

with the integral taken along any path running from $y$ to $z$.

System is defined through Hamiltonian: 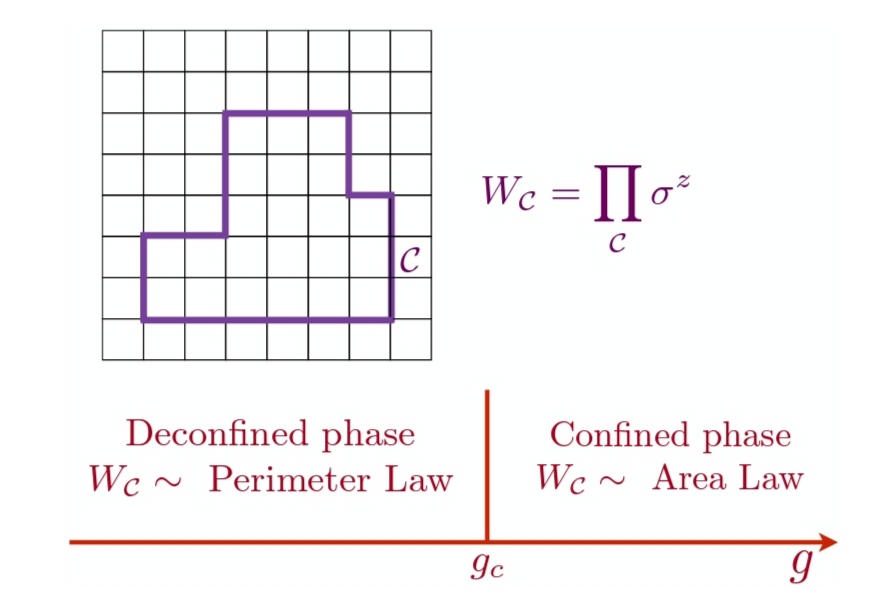 In this example, Wilson loop is nonlocal order parameter for phase transition.

Suppose you have a system with physical field $\sigma(\vec{r})$, which is constrained by some law $L[\sigma](\vec{r})=0$. Naively, to do statistical mechanics, one has to carry around the constraint $L[\sigma]=0$ in all computations.

In some cases, in particular when $L$ is linear and built out of derivatives, the constraint can be explicitly solved by writing $\sigma = K[\phi]$, in terms of a new field $\phi$. This allows us to work directly on the constrained manifold. The price of this representation is that this new field is, in general, a gauge field. This gives a general mechanism for gauge theory in statistical mechanics.

For example, if $\sigma=\sigma_{ij}$ is the stress tensor then the condition of mechanical equilibrium is $\partial_i \sigma_{ij}=0$. This can be solved (in 3 dimensions) by writing $\sigma_{ij} = \epsilon_{ikl} \partial_k \phi_{lj}$. The new field $\phi$ cannot directly be a physical field, since we can add any function $\Delta \phi_{lj}$ for which $\epsilon_{ikl} \partial_k \Delta \phi_{lj}=0$, such as constants. We are thus led to consider the gauge theory for $\phi$. The original physical Lagrangian, once written in terms of $\phi$, will have Wilson-loop-like terms, after using Stokes' theorem. For example, the surface integral $\int_{A} dS n_i \sigma_{ij} = \int_{\partial A} dl_i \phi_{ij}$, where $A$ is some surface with boundary $\partial A$.

The example here is taken from the physics of amorphous solids at low temperature, for which the states of mechanical equilibrium control the vibrational and rheological properties of the solid. In this case one needs to also impose torque balance, so $\phi$ is further rewritten in terms of a more primitive field, but the result is the same: gauge theory.

Not the answer you're looking for? Browse other questions tagged quantum-field-theory statistical-mechanics duality wilson-loop or ask your own question.

25
What is a simple intuitive way to see the relation between imaginary time (periodic) and temperature relation?
12
Gauge Field Tensor from Wilson Loop
3
Physical interpretations of the generating functions $Z[J]$ and $W[J]$ (or $E[J]$)
5
The gauge transfomation of the Wilson line
2
In the path integral for quantum field theory, do the intermediate states have quantized particles?
4
Knots in 3d pure gravity
8
Path integral in QM vs QFT
9
Path integral for complex scalar field