A decay is said OZI-suppressed if:

if you can arrange it [the Feynman diagram of the decay] so that there's some time at which the quarks annihilate and all of the energy/momentum is carried by gluons. Graphically, this is equivalent to being able to draw a vertical line (or curve), the "cut," such that all the initial state particles are on the left side of the cut, all the final state particles are on the right side, and the cut goes through only gluon lines. Hopefully you can see why the diagram in your question doesn't fit these criteria. (i.e. no, you're not allowed to separate two quarks in the same hadron, but it's more than that.)

The Feynman diagram is a tool to represent quark, lepton, boson, meson or baryon reactions. Below, the transformation of a positron $e^{+}$ (lepton) and an electron $e^-$ (lepton) into a photon $\gamma$ (boson). Then the photon transforms back into "any" pair quark-antiquark with the emission of a gluon. 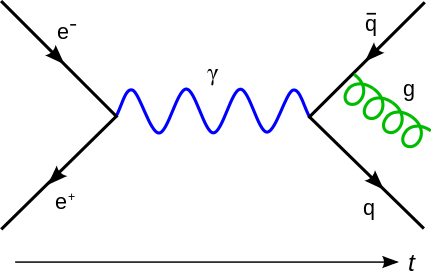 What I want to know is:

When you are asked "Is X transformation OZI-suppressed?", do you have to build the Feynman diagram or is there a convenient way to work it out?

How do you place bosons (photons and gluons) when you only know the undetailed reaction? I assume it is with the conservation of numbers (other rules), but what is the detailed method on the example provided here? In the reaction $e^+ + e^- \rightarrow q + \bar{q}$, how do you know you must write a photon in between? And how do you know the gluon is emitted? Do you have to learn them by heart? Here I just picked an "easy" example because I don't understand the thought process and I would like to replicate try to replicate it by myself on a bigger reaction like the reaction of baryons without having to look up online what the reaction is.

Well, it is a "culture" more than a rigid recipe, and is transmitted by experience and hit-or-miss.

The diagram you write down is a bona-fide Feynman diagram (mostly) describing $e^+e^-$ annihilation at high energies, and has a formal expression in perturbation theory to summarize, which gives you the leading order of the process. It involves a photon, because this is the strongest interaction the lepton pair can undergo. More photons would be suppressed by powers of α. Photons couple to leptons, so the outcome could have been a $\tau^+ \tau^-$, for instance, but also to quarks, so your picture has it produce a quark-antiquark pair, of a given flavor. Unfortunately, the quarks won't stay like that, but will "dress" themselves to hadrons by the emission of zillions, not just one, of gluons and quark-antiquark pairs, virtually pointless to write Feynman diagrams for, since they won't correspond to meaningful terms in a useful perturbation expansion, the strong coupling being large there.

Nevertheless, they will end up as hadrons, so you may do crude counting estimates and get an impression of the relative hadronic and leptonic cross sections involved at a given energy, etc. (LEP physics).

But when it comes to pure hadronic interactions, Feynman diagrams are only meaningful for small couplings, i.e. very "hard", energetic interactions of quarks and gluons, describable by perturbative QCD. One then utilizes a front-interface technology (structure functions, etc..) to account for the hadronization of these colored QCD pieces.

At lower energies, the strong coupling is close to 1, and "Feynman diagrams" are largely suggestive cartoons (Harari-Rosner duality diagrams tracking flavor). That is, exchange of one gluon is hardly more likely than exchange of two or 5, so people don't quite dwell on them to much. This is the world the OZI rule acts in. Still, a J/ψ particle is sufficiently heavy (high energy) for the coupling of the 3 intermediate gluons its "hairpin" of $\bar c c$ must annihilate to to be small; and so make the decay improbable and hence its width narrow. (Just one gluon is excluded because it is not colorless; and two by a C argument.)

The reverse of the φ reaction you wrote, so the most likely decay channel, is how Zweig discovered his rule (and invented quarks, by the way, on dynamical, not just group theoretical grounds!). The hairpin annihilation diagram of the valence quarks $\bar s s$ of the φ would require (today) decay into gluons which are still penalized even at that small mass. So it is much easier/preferable to not annihilate the strange quarks (and decay to three π s), but, instead, pop a light pair of quarks out of the interaction (meaningless to attach its parent gluon to a specific quark! It, or the remaining zillion ones involved in hadronization and neutralizing color...) and decay to your KK, instead.

As a result, at this level, Zweig's rule is an inspirational principle and not a rigid consequence of exacting perturbative expressions. And Feynman diagrams are basically mnemonic devices to fix one's thinking pictorially. You are not alone in being baffled by them. Feynman hated them and screamed at his ex- student Zweig in 1975 as he (GZ, now a full professor) explained his rule to him for the n'th time after the November 1974 revolution, which vindicated it. It was all touchy-feely and imprecise, and the "Feynman diagrams" were hardly meaningful, although there is no superior bypass. Doors would slam behind George.

Not the answer you're looking for? Browse other questions tagged particle-physics standard-model feynman-diagrams or ask your own question.

8
What is the precise statement of the OZI Rule?
0
Comparison between $\rho^0$ and $J/\psi$ decay mode

8
What is the precise statement of the OZI Rule?
1
Is this Feynman diagram possible?
2
Feynman diagram and vertices in a hadron decay
7
Why does charmonium (and phi mesons) not decay via quark and antiquark annihilation?
1
Why is $J/\psi$ not able to decay into $\pi^+\pi^-\pi^0$ (Ozi-rule)?
3
Feynman diagram of Higgs production by $gg$-Fusion
1
Should quarks be grouped together in Feynman diagrams?
0
How to draw Feynman diagram of quark decaying to more than three quarks (weak), and tell if it's Cabibbo-allowed/supressed?