Why is the direction of cathode rays independent of the position of anode?

Cathode rays are emitted normally from the cathode surface. Their direction is independent of the position of anode. 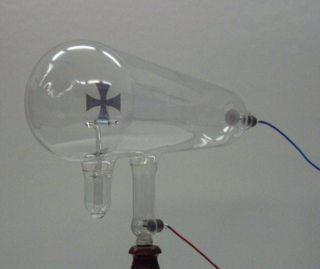 One possible explanation, I came up with is: The negatively charged electrons from the cathode experience strong repulsive force from the cathode, due to which they gain very high speeds. Due to this they are not significantly deflected by the anode. But if this is the case, I doubt why we must have an anode inside the discharge tube and carry-on only with the cathode? So I think this kind of explanation is incorrect.

To put my question in a nutshell:
Why is the direction of cathode rays independent of the position of anode?

The electric field created by the anode is too weak to significantly influence the emission of the electrons from the cathode, which is mainly due to thermal effects, hits by the gas molecules, electron repulsion among themselves, etc.

However, once the electrons are released from the cathode, they do feel the anode field and start accelerating towards the anode. Anode is necessary in order to drive electric current by removing the electrons from the tube. Otherwise, a negative electron cloud would accumulate in the tube and prevent further electron emission.

This is an excellent question, with no straightforward answer.

The key thing is to remember that the cathode ray tube evolved out of the discharge tube. This is a tube with an anode and a cathode, filled with a gas (e.g. Neon) at low pressure. A potential difference of several hundred volts is applied. Gases are normally insulators, and need to be ionized, to some extent, to become conductors. Once a current gets going, the current itself generates ions. So a gas (at low pressure) is an insulator which becomes a conductor once a current begins to flow. This makes the discharge a paradoxical, non-linear process which is hard to understand.

So once the current in a Crookes tube gets going, the tube is filled by a conductor (i.e. by partially ionized gas). If this conducting medium were absolutely uniform between anode and cathode the potential would decrease uniformly from say 800 Volts at the anode to zero at the cathode. However, this is not the case. Just above the surfaces both of the anode and the cathode there are layers where the medium is much less conductive. Why should this be?

The electrons on the other hand are in endless supply from the cathode, at least in principle; but in practice they are trapped in the cathode by the 'work function' of the cathode metal. (For this see discussions of the photo-electric effect.) A strong electric field (such as the field in the tube) is not enough to get them out; for that you would need millions of volts per centimeter. To escape, an electron needs a helping hand, e.g. an ultra-violet photon (as in the photoelectric effect), a good jolt from a thermal vibration (the thermionic effect: but for this the cathode has to be hot), or, as applies here, a good jolt from a positive ion, accelerated towards the cathode. So the supply of electrons is effectively limited by the number of ions impinging on the cathode. As you see, everything depends on everything else! The upshot is that the depletion of the positive ions, in the layer above the surface of the cathode, leads to a depletion in the number of electrons, too. There are not many charge carriers, of either sort, in this layer: so it is relatively an insulator. This means that the potential difference between anode and cathode gets concentrated in this layer: within it, there is a strong electric field, with the lines of force crossing the layer perpendicularly. Most of the 800 Volts acts across this layer. This is the field that accelerates the electrons, once they are liberated from the interior of the cathode, and sends them speeding towards the Maltese cross.

There is less excitement at the anode, because the anode is unable to produce positive ions. But any positive ions that are in the vicinity get repulsed by the anode, and any free electrons get gobbled up, so again, there is a depletion of charge carriers, and a bit of concentrated electric field in a layer above the anode, but much less than at the other end. (I'm not sure why!)

So my answer to the original question is this: because the tube is filled by a conducting medium, the field strength within the body of the tube is relatively small and has little effect on the fast-moving electrons. The electric field is concentrated in a layer just above the cathode, and it is in this layer that the electrons are accelerated to high speed.

If anyone who knows more about this stuff can add to my explanation or correct it, I will be delighted!

(For more on the conditions within the different regions of the partially ionized gas see the Wikipedia article on Glow Discharge1.)

Not the answer you're looking for? Browse other questions tagged electricity electrons plasma-physics air or ask your own question.

1
Observations in the cathode ray tube experiement
1
Do electrons lose energy between the battery anode and cathode?
1
How does a Pulsed Plasma Thuster work?
0
Energy forms of a charged particle in an electric field?
0
Thermionic emission
3
How do electrons in a cathode ray remain in a straight line if they are all negatively charged?
1
Why is the cathode of a voltaic battery considered a positive terminal?
0
Why does a hot cathode emit electrons if it is a cathode not an anode?
1
Why is the cathode filament in an x-ray tube negatively charged?
0
Do cathode rays produce radiation?