I have been watching quantum mechanics documentaries and reading a layman's book called "The Quantum Universe". I believe I understand why the double slit experiments exclude a particle only model. However I do not understand why the particle portion of particle-wave duality is needed. When I google the title to this question I do not get an adequate explanation of why the particle side of wave-particle duality is needed I feel. I believe the explanations assert that a particle moves in a wave-like/probabilistic manner but what is the evidence that requires a particle even exist instead of the wave itself being the whole story?

Forgive me if this is duplicate, my googlefu did not reveal a duplicate.

Elementary particles are understood today as the quanta of quantum fields. The fields are ontologically primary and exist even when there are no particles, but a quantum field is not “a wave-only model” as is, say, a classical electromagnetic field.

Instead, a quantum field is a continuous field, existing everywhere in spacetime, of operators that create and destroy quanta with particle-like properties. Quantum fields are not just waves, nor just particles, but rather a mathematical hybrid for which our classical environment gives us no intuition. Fortunately, mathematics makes them understandable to some degree and we find that models using quantum fields, such as the Standard Model, are extremely accurate.

The answer is no, not with the mathematical tools we have developed so far to describe data and observations.

The electron is the first elementary particle observed experimentally.

This single electron at a time double slit experiment

shows that single electrons exist ( frame $a$ with a footprint explainable as for a classical "particle"). It is the accumulation of electrons with the same boundary conditions that builds up a pattern of interference that imposes the need for a wave description in describing what an electron interacts as, that a particle attribute is not enough to explain the data. The probability hypothesis for quantum mechanical interactions, i.e. for the dimensions consistent with the Heisenberg Uncertainty Principe, is the way to explain interactions of elementary particles, and thus the particles themselves.

It shows beam particles entering from below , and one interaction with many particles coming out. We call them particles because their trace is the trace of a particle ,not a wave. The experiment has studied a large accumulation of such interactions, which will show the quantum mechanical interaction under study.

{ I am partly guessing it is a study $K^-$ interaction at 10 GeV/c in the 2 meter hydrogen bubble chamber. In this photo the curling track in the magnetic field is either a $π^+$, (or a $K^+$ the ionisation will distinguish the two masses but as there are only four charged tracks the incoming must be negative) which decays into a $μ^+$ and a neutrino, andfinally a positron with the accompanying neutrinos/ antineutrinos which cannot be seen }

In the mainstream mathematical model we have developed up to now assuming a wave nature for single particles is not possible. The wave nature appears in probability distributions, accumulation of data in the same boundary conditions, single particles behave as classical particles macroscopically.

There exist off the main stream theories and efforts to explain with a deterministic model the quantum mechanical probabilistic nature. One is Bohmian mechanics, but it cannot describe all observations , (it is using an underlying wave description). There are people still working on these lines, but have not been able to explain all the observations and data that the mainstream theory does.

However I do not understand why the particle portion of particle-wave duality is needed.

One of the theories which fails if light was considered to be made of just waves is the photoelectric effect. Had light been just a wave, the energy of the light wave must be proportional to the brightness and hence the wave's amplitude. We could base our predictions as:

However, this is completely at odds with what we observe:

The wave theory completely fails. What we hypothesize instead is that light comes as discrete particles with a defined energy - photons. That fits both the sets of observations.

The photoelectric effect introduced evidence that light exhibited particle properties on the quantum scale of atoms. At least, light can achieve a sufficient localization of energy to eject an electron from a metal surface.

The standard model, a quantum field theory, is the most complete description of particles and their interactions. Though physicists don't normally think about it quite like this (e.g. see G. Smith's answer), a quantum field theory is simply the theory of high dimensional fields with quantized excitations (i.e. wave packets) that can exist in superposition. A quantized wave acts like a classical particle on length scales that are much larger than the wavelength. So "yes" in the sense that, at the foundation, the theory is a wave only theory.

However, one could argue that particles are necessary due the fact that the the wave excitations are quantized, and further that the interaction of the quanta can be discrete, e.g. in particle creation and annihilation. Feynman thought of particles as "any bits of energy that come in lumps." Under that definition, the lumpyness of the field excitations and their interactions make the particles abstraction essential. But still, ontologically, we think of the particles themselves as wave packets of the fields in the modern view.

No. As anna v has explained we only ever observe particles. We do not observe waves, but we use them to calculate the probabilities for where particles might be found. Actually, they are not even waves. To take the simplest case, the "wave function" for a plane wave state is actually a helix in a complex valued configuration space. The helix rotates in time, creating the illusion of waves on the real and imaginary axes. 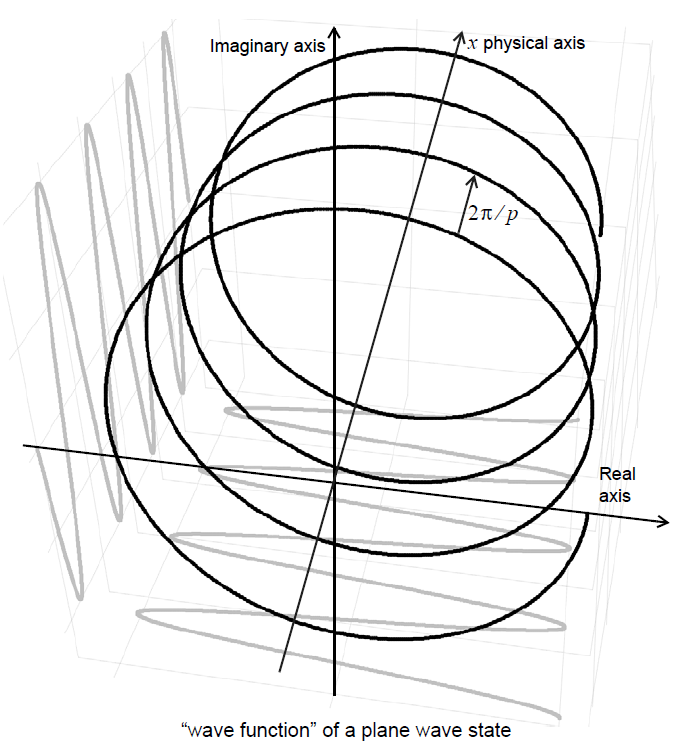 The reason for apparent wave effects is buried deep in the mathematics of probability theory and Hilbert space, and involves a higher level of mathematics than is commonly taught to physicists. However, it does make completely clear that there cannot be any physical wave, or indeed any physical field. This is just how calculations have to be performed in order to preserve the probability interpretation for a system in which probabilities result from indeterminacy, not from unknowns, or hidden variables.

The many-worlds interpretation of quantum mechanics essentially says that there aren't actually any particles, just the quantum waves and our observations of them - the "particles" are just our limited observations of a small slice of the complete quantum waveform. As a result, you could say that they're a wave-only explanation of fundamental particles, since the particles don't "actually" exist.

Here's a Youtube video explaining it in a bit more detail.

Not the answer you're looking for? Browse other questions tagged quantum-mechanics waves wave-particle-duality elementary-particles point-particles or ask your own question.

88
What is more fundamental, fields or particles?
1
In what way is a wave-only description of quantum mechanics insufficient?

2
Can electron exist as a standing wave inspite of successive superposition?
45
Why are muons considered to be elementary particles in the Standard Model?
2
Doubt on "wave-particle duality" in quantum mechanics
1
In what way is a wave-only description of quantum mechanics insufficient?
0
Does Wave-Particle Duality Mean "Particles" are Just Waves With Short Wavelengths?