When $A$ falls into the atmosphere at an angle $\alpha$, does the terminal velocity of $A$ return to constant?

When the meteor reaches terminal velocity the forces on it are balanced. Otherwise there will be acceleration in the direction of the resultant force.

There are only 2 forces on the meteor : the atmospheric drag and its weight. When terminal velocity is reached these must be equal and opposite. The weight is always vertically downwards therefore the drag force is vertically upwards.

Conversely if the meteor is not falling vertically downwards then you can be sure that it has not yet reached terminal velocity. 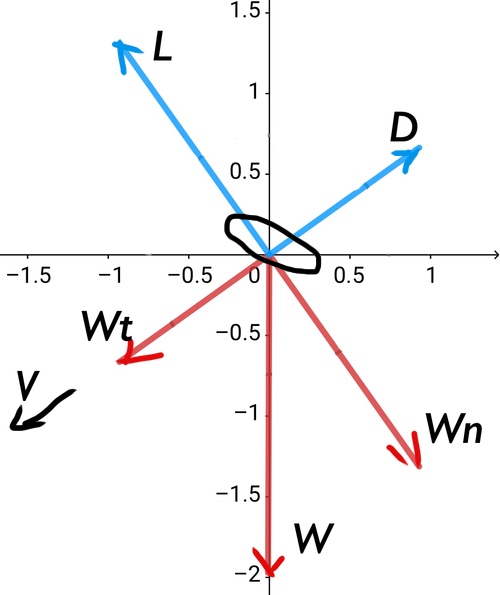 $V$ is the direction of the meteor and $W$ is the weight of the meteor. $W$ has two components: $W_t$ is parallel to $V$ and $W_n$ is perpendicular to $V$. The meteor is acted on by the air, producing two components: $L$ is perpendicular to $V$ and $D$ is parallel to $V$. When $W_t = D$ and $L = W_n$, the meteor moves in the direction of $V$ until it burns down or falls to the ground. This is consistent with Newton's law.

Meteors are not a standard sphere, so in some cases they will have what I said. Even bounced back from the atmosphere to cosmic space.

Not the answer you're looking for? Browse other questions tagged newtonian-mechanics forces projectile drag meteors or ask your own question.